What Can an Arcade Game Teach Us About Ministry?

Whack-a-Mole in an arcade

Whack-a-Mole is an amusement park classic where one takes a mallet to a seemingly unending set of furry rodents that pop up at random from holes in a big board. The object of the game is to force the individual moles back into their holes by hitting them directly on the head with the mallet, thereby adding to the player’s score. The more quickly this is done the higher the final score will be. 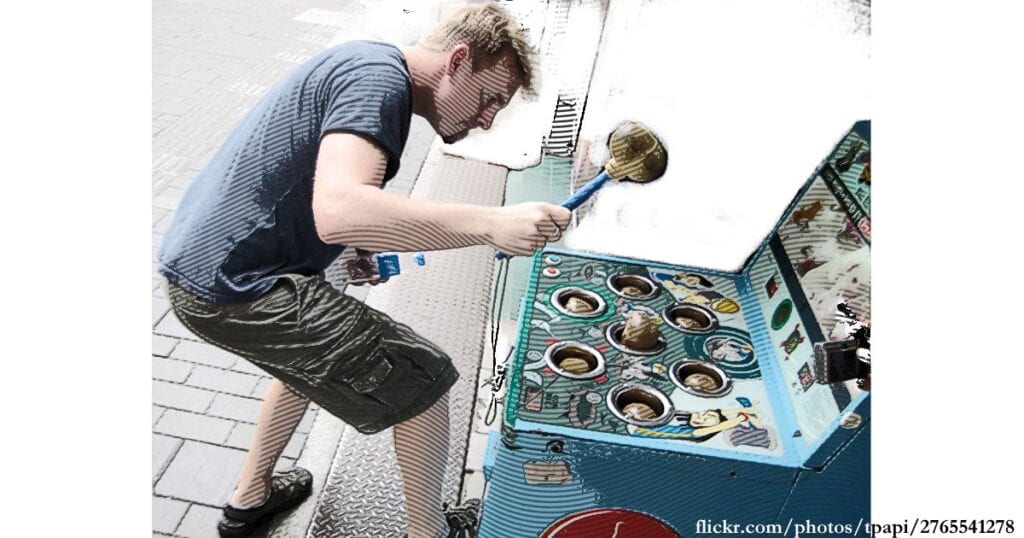 Whack-a-mole has become something of a metaphor for a recurring problem that one never seems to get ahead of. In your ministry, have you sometimes felt like you are caught in a game of whack-a-mole? For every person we help, three others pop up.

The whack-a-mole experience in ministry

Sometimes it is inevitable that we face the same problem many times in ministry.

On the other hand, there are many times we need to ask the question about whether there is any way this problem can be prevented from spreading or recurring. Think about this story…

A man who saw someone drowning in a rushing river. He jumped in, swam to the person and pulled him to shore. A crowd witnessed this and was applauding his deed. But every few minutes there was another body to be rescued. After a number of rescues, he does not jump in but seems to walk away. To the crowd waiting for him to jump in he says, “I am going upstream to find out who is throwing them in or why they are falling into the river.”

Looking for underlying causes… and doing something about them

Vincent was a master at going upstream, addressing root causes

He saw first hand the ignorance of the faith of so many in his time. So he preached God’s mercy and the sacrament of reconciliation.

He saw the woeful state of the clergy. So he began to work with interested priests, first by holding Tuesday Conferences (continuing education in our language). He quickly realized that continuing education was not enough so he in effect he fostered what became a system of seminaries dedicated to forming good priests.

He saw that charity need to be organized so he formed Confraternities of Charity in every place he ministered. Lay people were taught to take an organized approach to meeting the needs for immediate assistance.

Vincent would see a situation, judge was was needed and then act find a way to meet that need. It is a simple method that has come to be known as See – Judge – Act. It has long been the pastoral method of Pope Francis who fosters people coming together to see, judge and act. The Second Vatican Council referred to as “reading the signs of the times.”