Vincent Was a Life-Long Learner 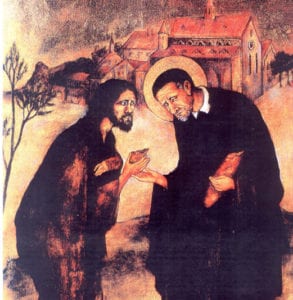 Vincent was a life-long learner.

Vincent didn’t just happen. Vincent spent his lifetime waking up to the demands of the Gospel and the needs of those who were poor.

I am reminded of the monk Bede Griffiths, a life-long learner, who said in the 81st year of his life that he learned more in the previous year than in the prior 80 years.

J. Patrick Murphy is on to something. I have rarely thought of Vincent in terms of his mentors.  Not only did Vincent have mentors but he was blessed with some of the best. Here is not the place to dwell on the specifics of what Vincent learned from these world-class mentors.

Instead, I wonder how they happened to become his mentors. There is a saying, “When the student is ready the mentor will appear.” (This saying is apparently falsely attributed to Buddha.) Regardless of who said it speaks of life-long learning.

This raised the question for me, “Am I ready to be mentored?” Or am I too comfortable in my present stage of growth?

I suspect they appeared because he responded to people he sensed were on the “right track.” He sought them out, engaged them in dialog.

It might be very worthwhile spending a few moments thinking about the people you admire and what you can learn from them.

This also raises questions for me about being a mentor.

A mentor is someone who walks with others and listens to the longings of their hearts. How often do I take the time listen to the longing of others and walk with them on their personal journey?

Some lessons worth repeating: Mentors make a difference. Get a good one. Be a good one.