Many Ukrainians are Tired and Traumatised, but All are Bravely Getting on with their Lives

Just 48 hours before the horrendous missile attacks which rocked Ukraine on October 10th, I lit a candle and prayed for the people of Ukraine in Kyiv’s iconic gold domed church of St Michael. Unaware of the horrors to come, I was sad but hopeful. For the past 20 years, I have worked with local organisations which are a lifeline to people caught up in conflicts in Sudan, Sri-Lanka, Myanmar, Afghanistan and DRC. However, nothing could prepare me for Ukraine.

My first stop is Odesa – a beautiful city, a mini-Paris, with wide tree-lined avenues. At first glance, it is a tourist town nearing the end of the season. Yet the conversations look serious, there is no joy on peoples’ faces and there is a tension in the air.

We visit Depaul’s freshly painted day centre where displaced families can come for food and hygiene items, counselling, practical advice and a safe place to talk and play. As I gather with the staff who are helping families desperately in need, we share a prayer of thanks to CAFOD, the Society of St Vincent de Paul, and all the other donors whose generosity has made this possible.

Ala, a psychologist who worked in the 2014 war, tells me that when people have so much on their minds they often forget to play with their children. Little chairs and squishy blue and yellow mats are laid out ready for children. Ala shows me a list of names, mostly mothers and grandmothers, eager to start group therapy in the coming days. She speaks gravely of the extent of trauma among civilians and soldiers, “without help, these people will be frozen”. 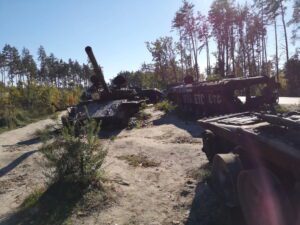 After Odesa, my next stop is Kyiv, a bustling cosmopolitan city with bright glass stores and trendy coffee shops. The outlying areas tell a different story. On the outskirts of Kyiv, we visit Moschun village. It is a mournful place – 80% of homes were destroyed in the first days of the Russian invasion. Piles of dusty bricks, rusty ovens and charred trees are all that remains. 300 people live here, but families with children haven’t returned. It reminds me of villages wiped out by the Pakistan earthquake, only this is no natural disaster.

Depaul’s community social worker, Valentina, lives in Moschun. There she sits in the sunshine slicing mushrooms to pickle for winter. She tells me that her son had spent every weekend over the last 10 years building the house which now lies in ruins. Valentina told me, “Even though we have no house this is still our home”. With bricks from the Vincentian Family, her son has already completed the walls of a modest home.

Valentina takes us to meet Natasha and her baby, David, now a plump six-month-old who was just a new-born when they fled a day before the Russian invasion. Natascha shows me the tiny animal shed they sheltered in for months after the Russians had gone. A toy tank is propped in the gable. Natasha has been surviving on food and hygiene items provided by Depaul since the beginning and bows her head with thanks.

Next, we drive through the city of Bucha, where hundreds of people, including children, were massacred. In the village of Zahal’tsi we are greeted by Natalya, the village activist and her 11-year-old son in a blue tracksuit. She has prepared a list of the most vulnerable people in the village, including those whose homes were destroyed, the elderly, large families and those with disabilities. 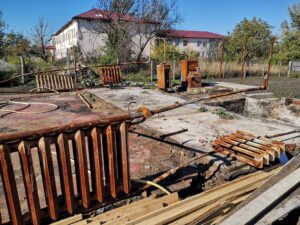 59-year-old Kateryna collects her bag of food and we follow her through the shrapnel flecked metal gates of her home. Before the war, she and her husband Mykola, 64, had a thriving home business selling electrical equipment. All that remains of their home and livelihood are eerie looking rusty pipes, radiators, and the broken glass jars of pickles in the cellar.

Mykola sits at the end of the garden with his head in his hands beside his burnt-out car, unable to speak to us. When the Russians arrived in the village they were told to flee or stay and be killed. Mykola has had a heart attack since the war and is struggling to cope with this cruel new reality. As we say our goodbyes, Kateryna starts to cry, “why did they do this now, just when we are growing old?”. 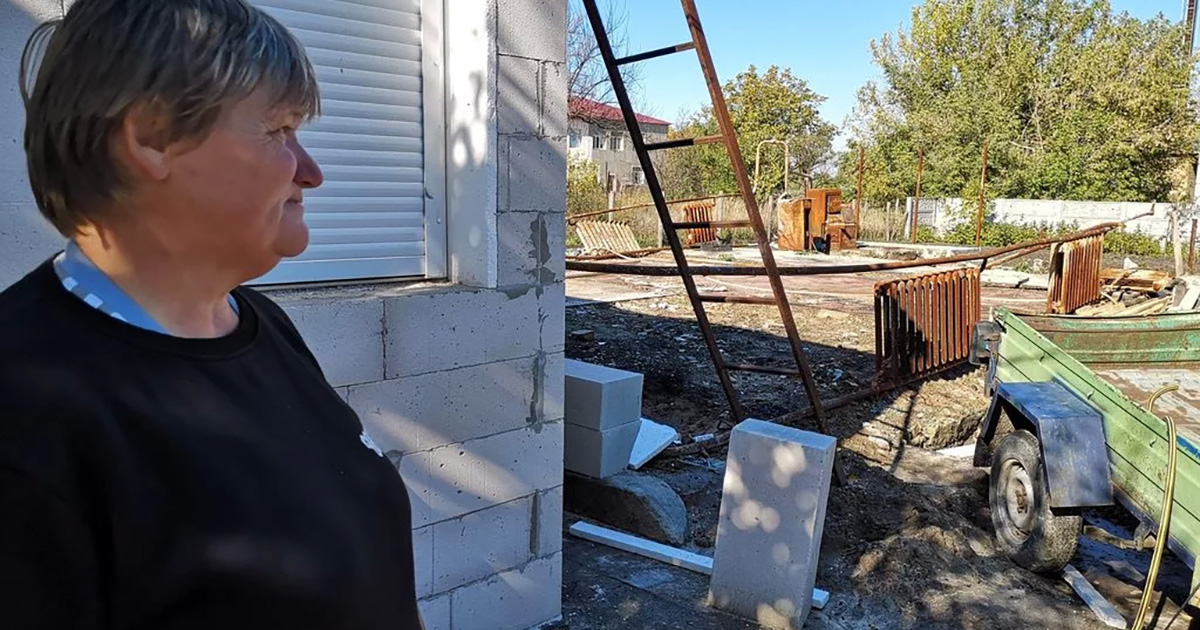 We drive back into Kyiv along the road where the menacing convoy of Russian armoured vehicles ground to a halt. The side of the road is lined with dozens of burnt-out tanks and the forests are now filled with mines.

In Kyiv, we participated in the opening ceremony of Depaul’s new day centre for displaced people and the first clients arrive. An air-raid siren goes off and I have a quick look at the bomb shelter. Just a few days later these staff members will seek refuge from the missiles in this cold concrete corridor. 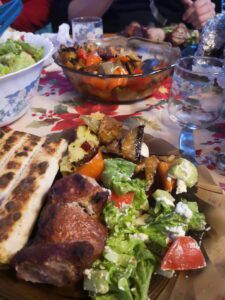 After the ceremony, we head to a traditional Ukrainian restaurant where the steamy ginger tea, fluffy potato pancakes and sweet pickled tomatoes are divine. Just three days later this jolly place beside a children’s playground is bombed.

As we travel to the border, we learn that the Russian Crimean bridge is on fire. We are oblivious to the fact that this will trigger a new wave of terror on Ukrainian cities, including retaliatory bombings of power stations, leaving many without electricity or water. I hear the horrific news on Monday morning and am relieved that our staff are all safe. By Tuesday, they have already reopened the centres to clients.

With characteristic Ukrainian kindness, my colleague Anna asks how I am. I respond, “pretty sad and useless thinking of you all coping with so much”. She replies, “I think you were infected by this feeling from Ukrainian air. We all feel it during the war about ourselves”.

People are tired and traumatised, but bravely getting on with their lives.

You can donate to our work in Ukraine: Depaul Ukraine Winter Appeal – Depaul International (int.depaulcharity.org)