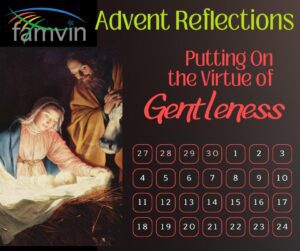 Putting On the Virtue of Gentleness
November 27, 2022

Saint Vincent uses the French word “douceur”, translated as meekness or gentleness, almost four hundred times in his letters and conferences, with various shades of meaning. It is one of the five Vincentian Virtues, and it is also one of the virtues stressed most by Saint Vincent in his conferences to the Daughters of Charity.

In the Common Rules for the Congregation of the Mission, St. Vincent1 states that the missionary, by exercising gentleness, will reconcile the hearts of men and women, so that they are converted to the Lord. Since the reconciliation of those involved in quarrels was precisely one of the goals that St. Vincent proposed for the mission2, he wanted the reconciler to able to remain cool when he mediated disputes that were hot!

Lord, grant that we may be filled with gentleness, especially since we are called to serve the most miserable and abandoned in society, in the footsteps of St. Vincent.

Let your gentleness be known to everyone. The Lord is near.

Tags: Advent
← Systemic Change Commission Advent Reflection, Vincentian Spirituality Many Ukrainians are Tired and Traumatised, but All are Bravely Getting on with their Lives →