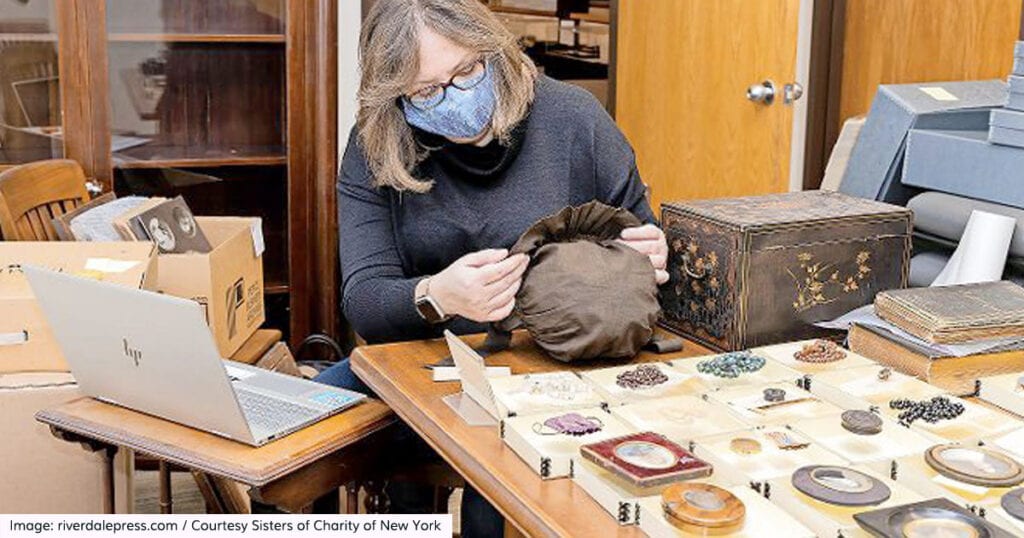 Even if you’re never heard of Elizabeth Ann Seton, you’ve felt her presence, even if you haven’t realized it.

The list of what’s been named in honor of America’s first native-born saint is too extensive to list here, but even two centuries after her death, St. Elizabeth Ann Seton’s legacy endures.

But on the College of Mount Saint Vincent campus, where they have carved out their own home, the Sisters of Charity of New York remember her in a much different way: Mother Seton.

Long before she was canonized, long before they erected statues of the simply dressed woman, Elizabeth Ann Seton was setting out to change the world. Modeled after their French counterparts, Mother Seton created the Sisters of Charity to make a difference. To create orphanages in a time when government provided no such services. And to be there for society when no one else was.

It’s always been about giving, so it makes sense the North Riverdale Sisters of Charity have found something new to give: Some of the very personal things Mother Seton left behind. Everything from a gold filigree family brooch Elizabeth wore on her wedding day before she converted to Catholicism, to her rosary and crucifix, even to locks of her hair.

All of them are heading to where the Sisters of Charity was born — Emmitsburg, Maryland, the home of the National Shrine of St. Elizabeth Ann Seton.

Many of the artifacts have been held by the New York sisters since 1972, and were part of a not so well-known display at their convent. Few ever had a chance to connect with St. Elizabeth in such a way, and that just wasn’t working for the Sisters of Charity anymore.

“Why should we have them when so many more people could get to know her and know about her?” said Sister Regina Bechtle, the local group’s charism director. “Most of our sisters — at least the ones I’ve spoken to — kind of get this idea that this is a letting go. But it’s also a sending forth. You’re launching these objects into a whole new life.”

A vast majority of Mother Seton’s old things were donated to the Sisters of Charity by the estate of her last living descendant, Ferdinand Jevons, three years before Pope Paul VI canonized her in 1975. When the carefully packaged artifacts make the journey from North Riverdale to Emmitsburg on March 8, it will arrive just in time for the bicentennial of Mother Seton’s death.

“It’s pretty humbling for us that they saw fit to donate these artifacts to the shrine,” said Rob Judge, the Emmitsburg shrine’s executive director. “They want the artifacts to help tell her life story, so that people can be inspired and understand why she did what she did. People relate to her, and that gives them hope.”

Mother Seton’s life was anything but cozy, said Mindy Gordon, the archivist for the Sisters of Charity. Born in New York City during the Colonial times of the 1770s to a prominent Episcopalian family, Seton’s mother died when she was very young.

She was just 19 when she married William Seton, sharing five children with him — and even raising his younger siblings. But when William died in 1803, Seton found herself alone, raising all the children they took in. Seton found help through the Catholic church, and converted not long after — a move that would alienate Seton from her family, and leave New York for Maryland by 1809.

“Archbishop John Carroll suggested she start an art school for girls,” Gordon said. “She ended up in Emmitsburg, and that’s where she began the Sisters of Charity in the United States. Three sisters would leave Emmitsburg, and she would send them back here to New York where the archbishop specifically tasked them to care for the growing orphan population here.”

Social service was always forefront of Mother Seton’s thinking each day, and she had plans to continue growing it in a very young United States of America. But she would never get to see those dreams come to fruition. She was just 46 when she died on Jan. 4, 1821.

The Sisters of Charity look to Mother Seton’s legacy in what they’re trying to become today.

“We sponsor 12 different ministries, large and small, in the area, and in Guatemala as well,” Sister Regina said. “Every one of those is led or staffed by people who are just on fire with goodness, with savvy, with desire to be of service and to help other people.”

Before the pandemic, the Seton shrine — not far from the historic battlegrounds of Gettysburg, Pennsylvania — would be visited by thousands. And as society slowly returns to normal, there’s hope those doors will fully open once again.

When it does, visitors will have far more from Mother Seton’s life available in front of them.

“She just really transcends the Catholic church,” Judge said. “Her life was based on seeing Christ in the poor. That’s literally the charism of what she founded the sisters. And the church, the Catholic church, was just where she was working out her personal holiness.”