Can you imagine any connection between the critically acclaimed movie “Little Women”, the Foundation of the Vincentian community, and the celebration of Martin Luther King’s life? 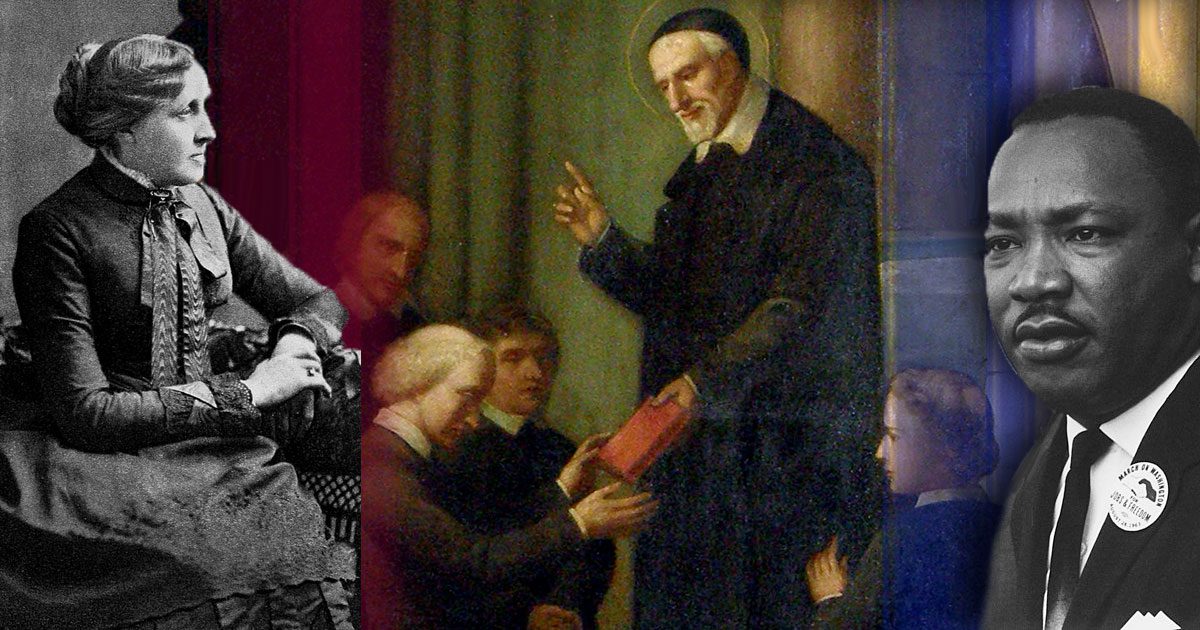 The movie Little Women has been nominated for an Academy Award. Louisa May Alcott is the author of the book “Little Women” the American classic that spawned 7 earlier movie versions. She was born less than two miles from where I write in Philadelphia but she moved at the age of two.

Neither they nor… she… would have guessed the impact she would have after she wrote the American classic 150 years ago. The book is inspired by and based largely on her experiences growing up in a typical neighborhood family of the time. At this time women were to be seen and not heard, to put it mildly. She felt this deeply and questioned the boxes women were expected to live in.

What was different about her was that she thought deeply about them and had a gift for expressing herself in writing. She dreamed about a better world with women freed from the social restrictions of the day. But she also never dreamed that she would actually be an early and influential voice for change in the lives of women to this day.

What we can take from her is that she paid attention to her experiences, learned to raise questions, see possibilities that others did not see and… did the little she could about it.

She went from being an observer to a dreamer and then a doer! She used her gifts well

St. Vincent Founded the Congregation of the Mission in 1617

Let’s travel back in time and across an ocean to a little boy in another ordinary neighborhood in France 400 years ago. He wanted a comfortable and respected life as a priest. And he wanted to be able to take care of his aging parents. All that changed in his mid-life.

With “daring courage” he began to take seriously what Jesus said, “whatever you do for the least of my brothers and sisters, you do for me.”

The founding of the Congregation of the Mission is just one small part of what he did. He more significantly realized that the laity, especially women, were an untapped resource in responding to the urgent needs of his time. We are just today beginning to rediscover how he mobilized them. He also singlehandedly established a network of seminaries where none existed but were desperately needed. In the process, he became known as a Saint, the Mother Teresa of the 17th century.

How did that happen?

Vincent experienced two events that would forever change his life. In the village of Folleville, he was deeply moved when heard the confessions of destitute persons living in the remotest areas of France. Later that year, in another village, Châtillon-les-Dombes, he organized the people of his parish to help alleviate the sufferings of a family plagued by sickness and impoverishment. Scholars agree that these two events gave shape to the heart of Vincent’s charism: the service of God in the person the poor, by both the preaching of the Gospel (mission) and the alleviation of poverty (organizing charity).

But there seems to be a third moment that has not yet been fully explored. He began to not only read scripture but question his own life experiences in the light of what he saw Jesus do and say in scripture.

Scripture became the lens through which he viewed his own experiences. Instinctively he asked, “What would Jesus do?” Vincent learned to think and read like the Jesus he read about in the Gospels.

As Louisa May Alcott, Vincent learned to question his experiences to see possibilities that others did not see and commit to doing something about it. He changed his world and is still changing ours… by simply observing, questioning, dreaming and then doing.

Vincent went from being an observer to being a dreamer and a doer. He used his gifts well.

Of course, in more recent times, we have Martin Luther King and his “I have a dream” speech. He was another one who listened to his experience, asked questions, dreamed of a different world and did what he could about it.

Implications for our lives

Let’s go back to the question “What does Louisa May Alcott’s Little Women, and St. Vincent’s founding of the Vincentian community have to do with how we live our lives today?

Vincent and Louisa were two ordinary people from the neighborhood. Yet, they shaped our lives today and can teach us something about how we can make our world a better place.

They both observed, questioned, dreamed and did.

Their lessons are very simple… ordinary people who went from being observers to dreamers, and doers.

In the Mass celebrating St. Vincent’s we are reminded of Paul’s words to the ordinary people of Corinth. “Consider your own calling, brothers. Not many of you were wise by human standards, not many were powerful, not many were of noble birth. yet God chose the weak things of the world to confound the wise.”

Yet they changed the world of their day astounding all by the way they loved one another.

Today let us as ordinary people pay attention to our experiences.

Ask yourself. how can I make my world better… my marriage, my family, my community, my country and my planet? What gift do I have to make the world a better place? We all have gifts the world is in need of.

The decision to go from observer to dreamer and doer is there for each of us. It’s there for you. Do you want to take it?

Oh, and before you go. Martin Luther King had a dream. But long before him Jesus had a dream of a kingdom in not of rulers and subjects but of sons and daughters. He shared that dream in many different ways … the sermon on the mount, his may stories. But most poignantly he shared it at the Last supper. He dreamed of a world in which people would wash one another’s feet. He even said dream this. “Do this in memory of me”. He was an observer, a dreamer and a doer of the littlest thing … and so he washed our feet.