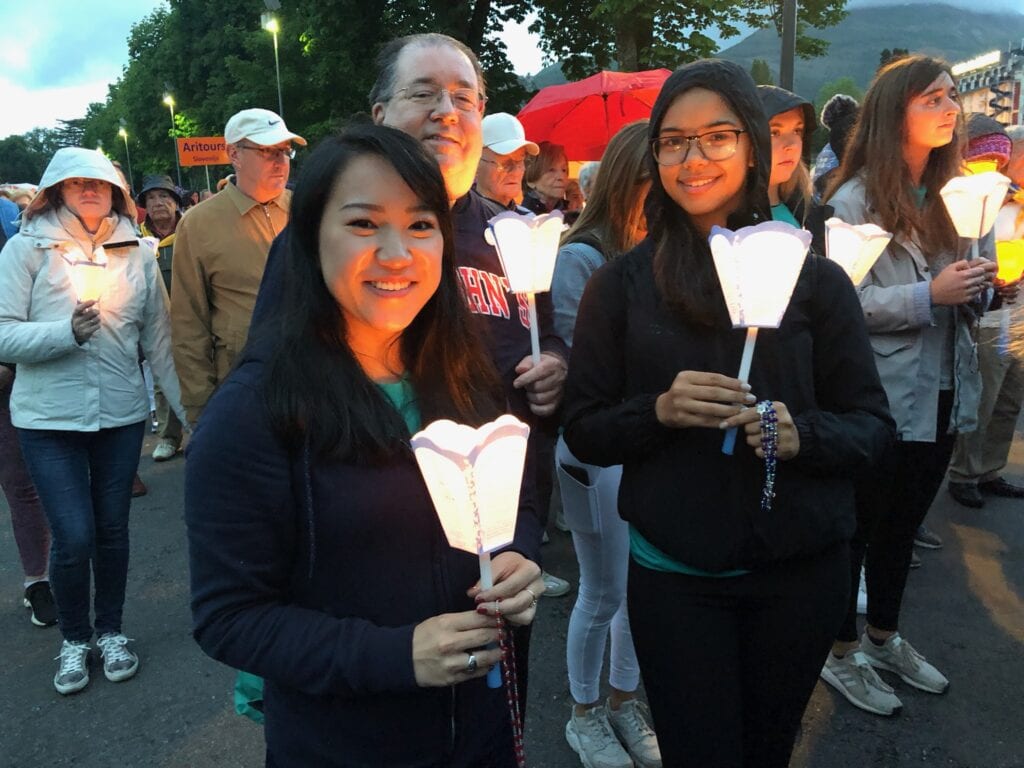 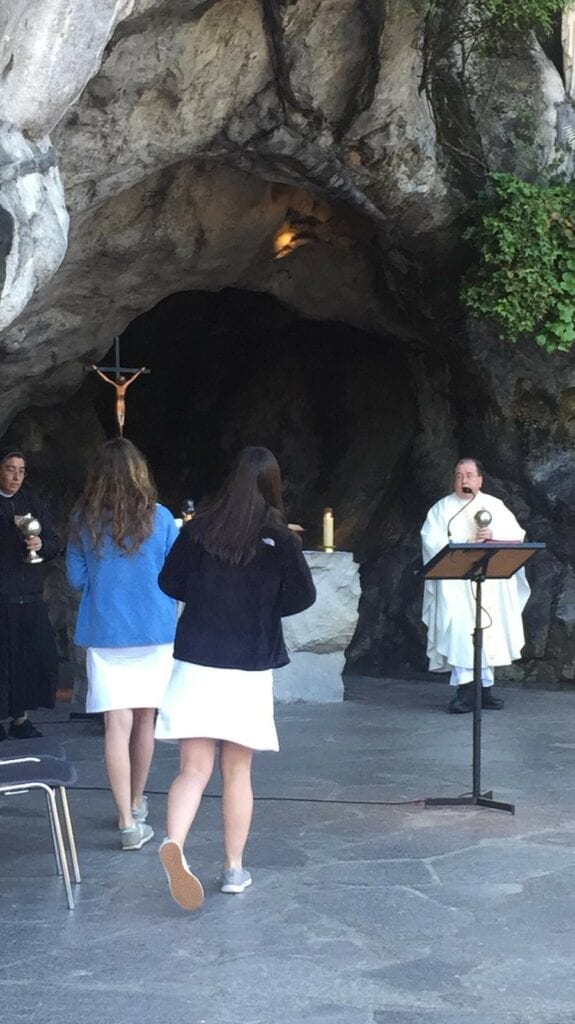 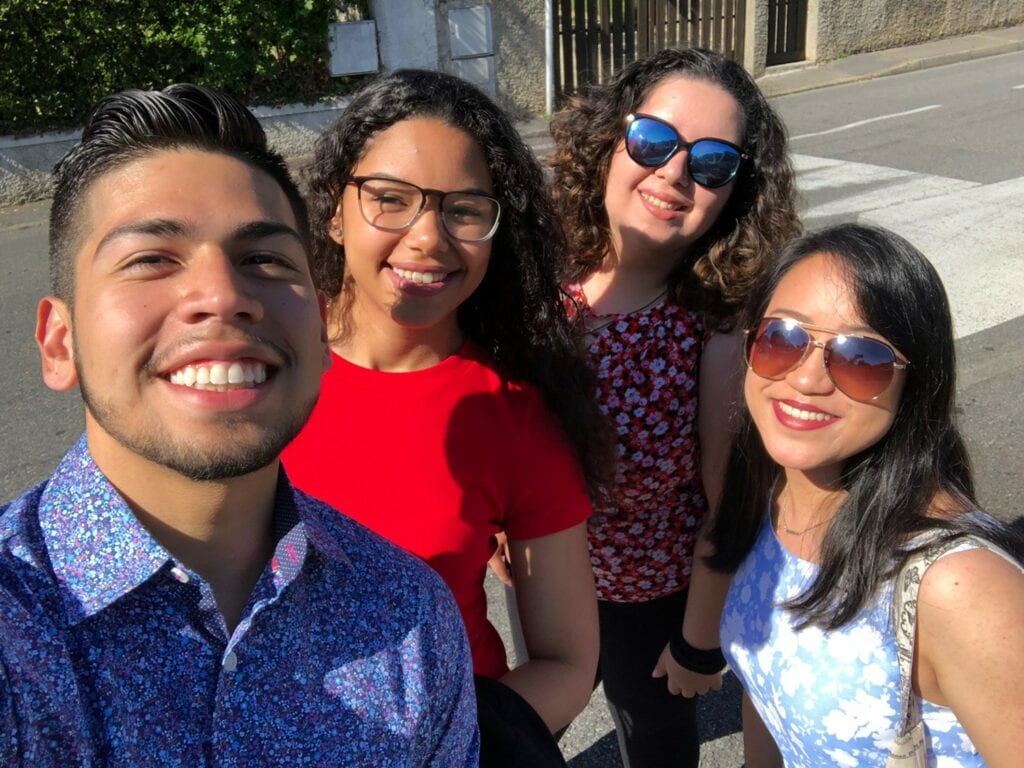 Pope Francis wrote that “…making a pilgrimage is one of the most eloquent expressions of faith.”  A pilgrimage is a spiritual journey to a place made holy by a heavenly encounter. From May 24 through June 3, four St. John’s University students (Theresa Vogel, Samantha Melendez, Keyla Peyano, and Paul Espiritu) had the opportunity to visit one of those very special places:  Lourdes, France.

On February 11, 1858, the Blessed Mother appeared to a young peasant girl named Bernadette Soubirous in the town of Lourdes in the Pyrenees Mountains in France. Accompanied by her sister and a friend, Bernadette went to the grotto of Massabielle on the banks of the river looking for driftwood to make a fire and sell some firewood to buy bread. Removing her socks to cross the little stream, she heard a great gust of wind in the stillness and looked up towards the grotto where she “saw a lady dressed in white, she wore a white dress, an equally white veil, a blue belt and a yellow rose on each foot.”

In a series of eighteen appearances the Blessed Mother revealed herself as “the Immaculate Conception” and requested that Bernadette “go, tell the priests that the people are to come here in procession and to build a chapel” at the site of the grotto where a spring of water was revealed to Bernadette. Bernadette Soubirous became a saint in 1933.

Since 1858, when Bernadette dug up the spring, 69 cures have been verified by the Lourdes Medical Bureau as “inexplicable” – after what the Church claims are “extremely rigorous scientific and medical examinations” that failed to find any other explanation. The Lourdes Commission that examined Bernadette after the visions ran an analysis on the water and found that, while it had a high mineral content, it contained nothing out of the ordinary that would account for the cures attributed to it. Bernadette said that it was faith and prayer that cured the sick: “One must have faith and pray; the water will have no virtue without faith.”

Bernadette’s request to the local priest to build a chapel at the site of her visions eventually led to a number of chapels and churches at Lourdes. The Sanctuary of Our Lady of Lourdes is now one of the major Catholic pilgrimage sites in the world. One of the churches built at the site, the underground Basilica of St. Pius X, can accommodate 25,000 people. Close to 5 million pilgrims from all over the world visit Lourdes every year to pray and bathe in or drink the miraculous water, believing that they obtain healing of the body and of the spirit.

For the 13 years St. John’s University has participated in the St. Vincent de Paul Service Pilgrimage to Lourdes that is organized by the North American Volunteers Our Lady of Lourdes Hospitality. This year our four St. John’s students were part of a group of university students from Harvard University, Franciscan University of Steubenville, Duquesne University, Florida State University and Lee University. The Lourdes service pilgrimage included two days of orientation and training, where the students learned about the story of Lourdes and St. Bernadette and took a walking tour of Lourdes.

The students attended Mass daily in several of the beautiful churches and chapels of Lourdes and participated in the various prayer services and processions. One of the highlights during the week was a Mass celebrated at the Grotto of Lourdes. As chaplain to our group of university students, I had the honor of celebrating the Mass. Our students assisted as lectors and choir members at this Mass.

Our last day in Lourdes was on Sunday, June 2. After attending Mass, we had a “free day” to explore Lourdes and the surrounding area. We began with an English breakfast at Eleanor’s Salon De Thé. The group visited the Funiculaire du Pic du Jer, which is a mountain cable car that offers a spectacular panoramic view of Lourdes and the surrounding area. After some time for shopping and walking, we ended the day with dinner at Phi Long, a wonderful Chinese/Thai/Vietnamese restaurant.

Tags: St. John's University
← A Convention to Eliminate Violence and Harassment in the World of Work and the Future of Work When Life Gets In the Way of Prayer →