What does it take for a person to leave a mark to this generation? Does one need to be wise, skillful, or popular? It is very easy to say to leave a mark, yet not all are able to. I personally believe that in order to make a change to this generation, one needs to have a sense of passion that comes from within—not out of compulsion, pressure, or obligation, but out of choice, commitment, and compassion. A wise man once said, “If an egg is broken from the outside, life ends; but if is broken from the inside, life begins.” Jesus calls us to be an ambassador to this world (2 Corinthians 5:20), to represent His name to the ends of the earth. I remember that time when Filipinos were completely awed at the coming of Pope Francis, and yet the Pope himself said: “Enough of Francis, focus on Jesus.” The Pope passionately and humbly reminded people that he was only a representative to this generation; that our jobs as Christians is to preach the Gospel and love other people. His actions may be simple, but it impacts this generation and the generation to come.

I am astounded by how the youth of today actively participates in society: more outspoken, energetic, and confident in most aspects. On the other hand, not all of their actions influence and impact the nation. There was a speaker in a recent youth conference that I attended who challenged and asked us participants to think of a person whom we admire the most and to write the qualities of that person. Some of us thought of a celebrity, others a businessman, while others thought of a man who contributed a lot in history. All of the people we had in our minds left a mark in history. After that, the speaker called five volunteers on stage and asked them to state the qualities of that person. Later on, he asked the whole audience to identify whether the quality being stated by the volunteers was attitude or a skill. Remarkably, all of the qualities stated were attitudes and none fell on skill. I was blessed to be in that conference, because I realized that people make a difference not because of their talents or skills, but because of the attitudes they have.

I remember one old hymn: “It only takes a spark to get the fire going…” Many of the people who left a mark were passionately committed to what they were called to do. The impact of a passionate person’s action may not be clearly seen now, but it will shake the future. Jose Rizal’s love for his country moved him to deliberately expose the reality and injustices that occurred in his time. Elijah, in the book of 1 Kings, fearlessly confronted hundreds of false prophets to follow the order from God. And who would have thought that a college student who created a social media site for his university–the CEO of Facebook—would become one of the richest young people of this generation! Their intention may not be popularity, fame, or power, but their attitude, commitment, and zeal made themselves symbols that impacted both their and our generation.

My point is for people to understand and embrace what we are called to do. Sadly, most people just go with the flow. The usual escape and decision that most people take is to be led and carried by the norms, standards, and trends that makes them passive; yet, “only dead fishes go with the flow.” St. Vincent de Paul incredibly went against his flow. He chose not to do what normal people would do. He followed his calling to serve the people who are poor and hungry, both physically and spiritually, rather than to be served and honored as a priest.

Jesus could have called the smart, the powerful, and the famous of His time—the Pharisees, Sadducees, and those who studied the law. Instead He chose common people: fishermen, tax collectors, even murderers. These people were also passionately committed to follow Christ that they immediately left their comforts for the sake of making a mark. Like them, we are called to vivaciously move and to leave a mark not for ourselves, but for God, this generation, and the generations to come.

Jared is a BS Education student of Adamson University. This piece won 4th place in the recently concluded Vincentian On-the-Spot Essay Writing Contest with the theme “#IamVincent. I Come into this World to Leave a Mark.”

“I came into this world to leave a mark”

That was the theme of celebration at Adamson University in the Phillipines for the recent feast day of St. Vincent de Paul. It included an essay writing contest and an art contest. Thanks to Pam Mantuhac for sharing all of this with the Vincentian Family. 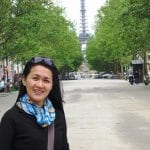 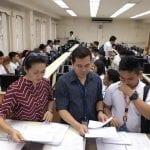 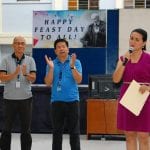