“It is in everyday life that we discern our call,” says Sister Maria Rita

We spoke with Sister Maria Rita, who has recently been sent on her first mission, in Mato Grosso do Sul (Brazil).

Sister Maria Rita went through her Seminary phase in the Province of Curitiba and returned to the Province of Rio de Janeiro on February 26, 2022. On March 7, she arrived at the mission, Nossa Senhora das Graças, which was recently constituted in Chapadão do Sul, in the State of Mato Grosso do Sul. 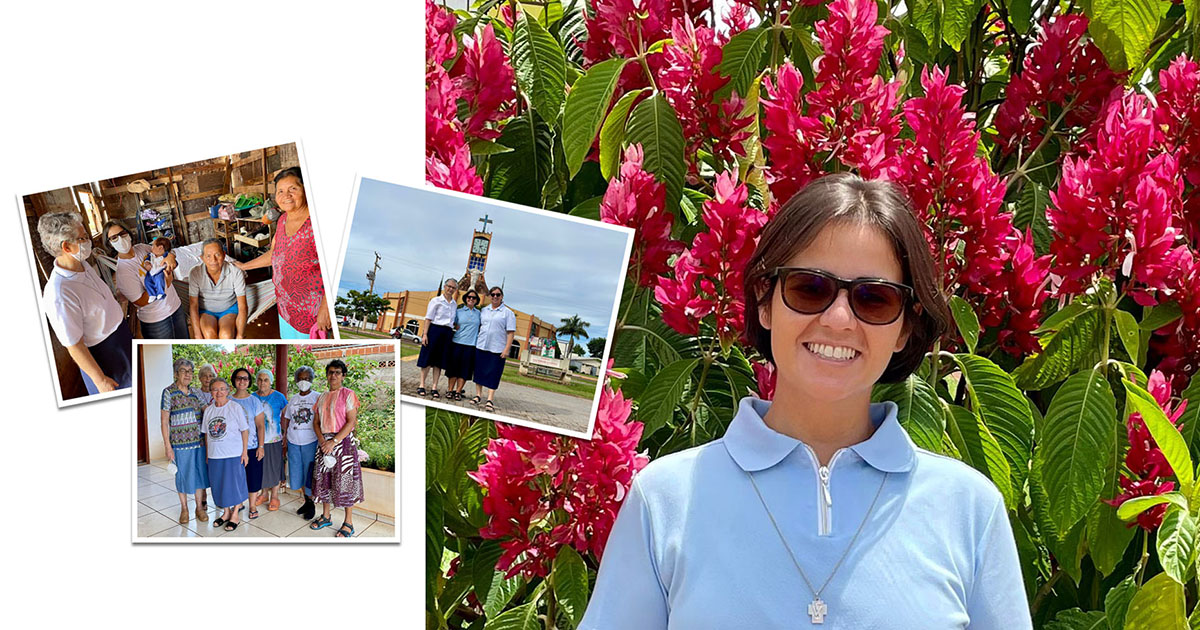 Three Sisters – Lourdes, Marlene and Maria Rita – make up this Community.Together, in addition to their apostolic work, they dedicate their days to the care of about 200 five to ten year-old children in socially vulnerable situations, at the Nossa Senhora das Graças Social Educational Center, run by the Daughters of Charity. In the evening, they participate in parish activities such as Bible Circle, community prayers, Pastoral issues and Movements. One Friday every month, the Sisters visit the local settlement, and participate in the Eucharistic celebration at a recovery clinic located in the Rural Area.

The desire to serve the poor began early: Maria Rita grew up in the Tijuca neighborhood, North Side of Rio de Janeiro, where the Sanctuary of Nossa Senhora das Graças da Medalha Milagrosa and the Provincial House of the Daughters of Charity of Saint Vincent of Paul are located.  Her mother is a devotee of Our Lady, and her name is a tribute to Mary, Mother of God.

It was through her mother’s influence that Sister Maria Rita started to participate in the community of the Shrine of the Miraculous Medal. During this time, her mother participated in the Association of the Miraculous Medal (AMM) and she joined the Vincentian Marian Youth (VMY). There she was finally able to integrate her desire to serve the poor, which she became aware of  an early age, into the Vincentian Charism. As a child, she studied at a traditional Lutheran school in downtown Rio de Janeiro, where she was encouraged to develop a critical sense and a proactive attitude towards the social issues dealt with by the Social Action Committee of the School.

Thus, the young woman came to understand citizenship as a consequence of the feeling of belonging to the community, which broadened her horizons and made her develop a more acute sense of Justice. Already sensitive to social issues, Maria Rita decided to take the entrance exam for a Law Program, and graduated from University of the State of Rio de Janeiro in 2012. College experience led the young woman to dedicate herself more intensely to the service of the needy, seeking to ensure them the inherent dignity of their condition as human beings, as beloved children of God.

Vocation: As soon as she graduated, Maria Rita started working in various organizations on the West Side of Rio de Janeiro, in institutions for children and young people with disabilities, a group that had always made her eyes shine in a special way. At the same time, she began to attend the Casa dos Pobres São Vicente de Paulo (Saint Vincent of Paul House of the Poor), run by the Daughters of Charity in the mountain region of Nova Friburgo. It was there that she discovered her true calling.

At first, the young woman spent weekends in the company of other members of VMY, carrying out specific activities in the House. Shortly afterwards she intensified her participation in those activities, spending more time with the Sisters and the sheltered. There she was able to truly experience the charism of Saint Vincent de Paul and Saint Louise de Marillac, and decided to become a Daughter of Charity. For that, she sought ther counsel of Sister Maria Cristina, a Visitor then, who welcomed her for the initial phases of formation in the Daughters.

The pre-postulancy phase took place from March to May 2019, at Educandário São Vicente de Paulo (São Vicente de Paulo School), under the supervision of Sister Penha. Between June 2019 and August 2020 she did her postulancy at Casa da Criança (House of Children), in São João de Meriti. In 2020, she was admitted to the Daughters for the Seminary phase, held in Curitiba. From October to December 2021, she performed an internship in the community of Novo Horizonte, in Mato Grosso do Sul, “the first municipality originating from a settlement”, highlights Maria Rita.

She returned to the Province of Rio de Janeiro and, in March 2022, was sent to her first mission, in Chapadão do Sul. She is very happy with the missionary work. “The response to the call is done on a day-to-day basis, not in a single moment. It is in everyday life that we discern our vocation”, says Sister Maria Rita.