ROME – Last week, Pope Francis sent a telegram to the president of Madagascar, expressing his closeness and promising his prayers after learning “with great sorrow” of the “wounds that have once again struck” this African nation, “through repeated cyclones, floods and the destruction of homes.”

According to Argentine missionary Father Pedro Opeka, “it will be very difficult to rebuild” after the country was hit by four cyclones with winds of 130 miles per hour.

“Thousands of families have lost their homes and there was a lot of damage to roads, destroyed bridges, schools and hospitals that were left without roofs,” he told Crux via email. 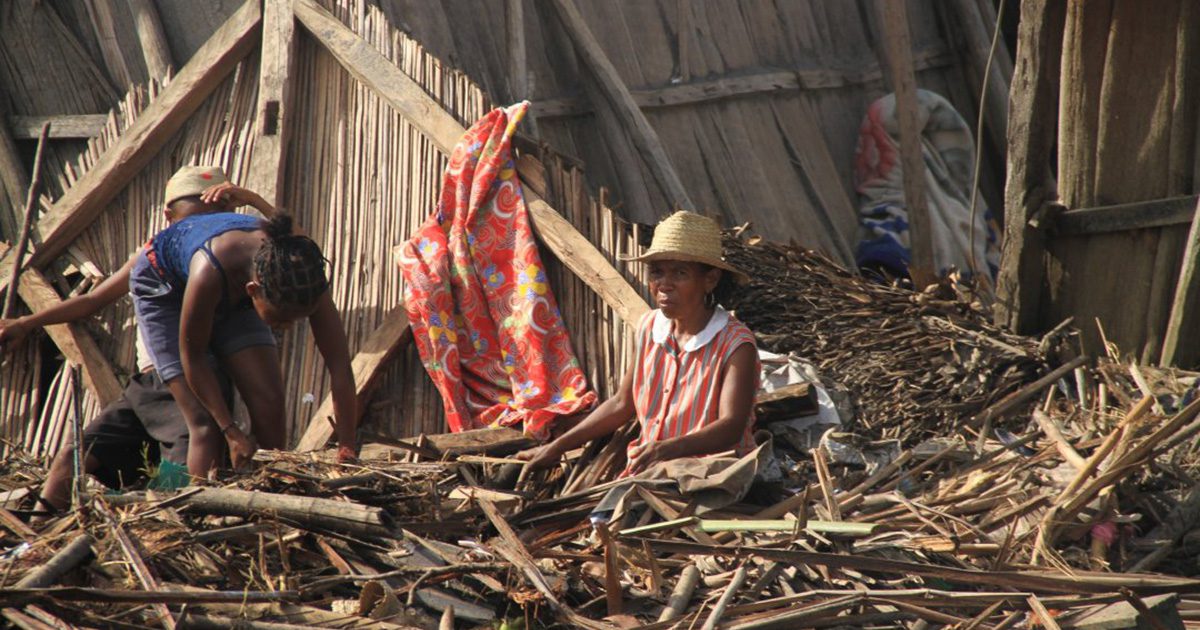 A Malagasy family is pictured outside their destroyed home Feb. 8, 2022, in Mananjary, Madagascar, in the aftermath of Cyclone Batsirai. (Credit: CNS photo/courtesy CRS.)

Opeka has long been a beacon of hope in one of the world’s poorest countries, where an estimated 75 percent of the population live on less than $1.90 a day. Francis visited Madagascar in 2019, where he shared the stage with the missionary, who’s been living in this island nation for the past six decades.

The setting for their meeting was a placed called “Akamasoa,” a word which means “good friends” in Malagasy, and is the name of a settlement founded by Opeka within the capital city Antananarivo. Akamasoa is divided into 18 neighborhoods that provide dignified brick homes to some 25,000 people. 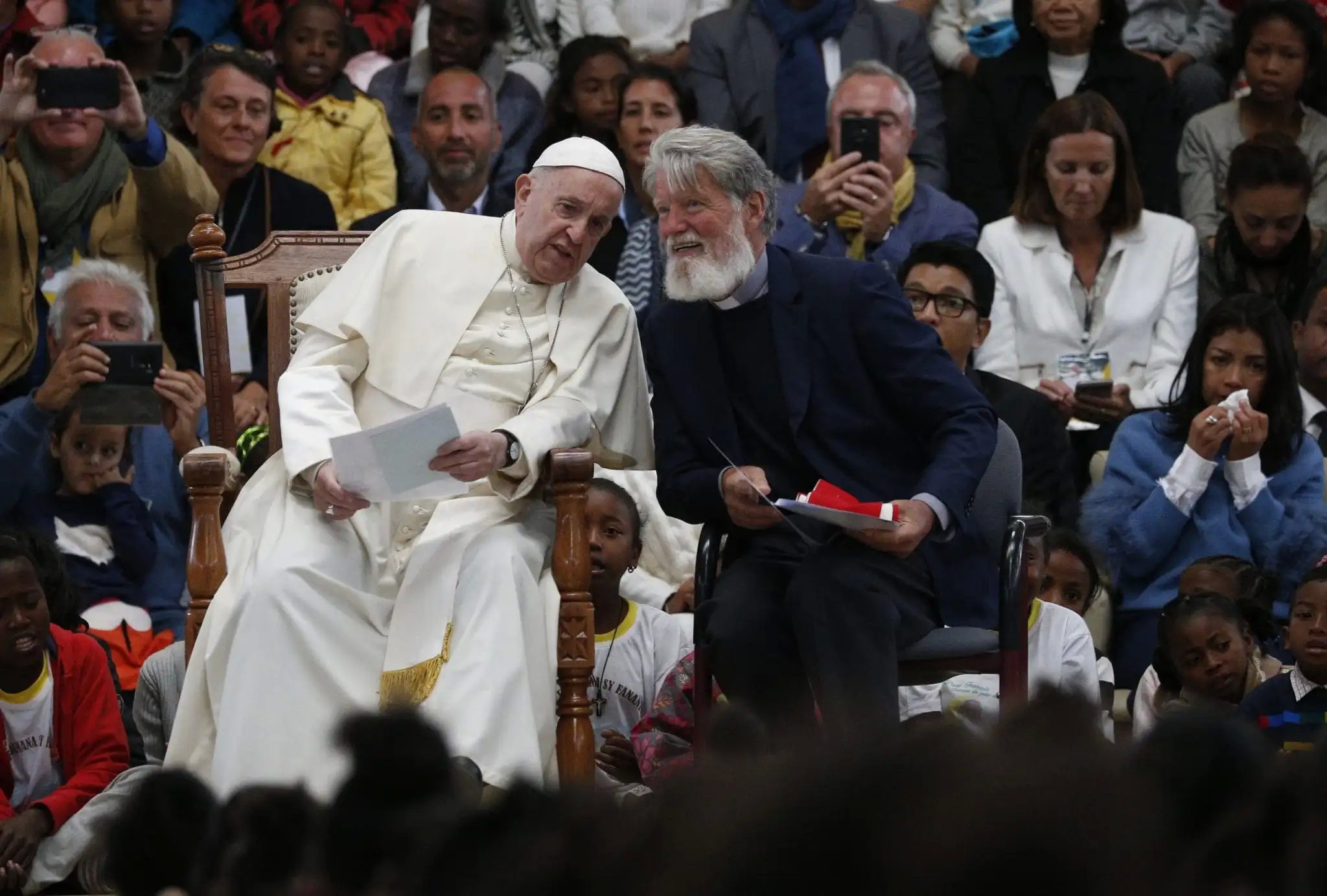 Pope Francis and Father Pedro Opeka, founder of the Akamasoa “Community of Good Friends,” attend a meeting with members of the community in Antananarivo, Madagascar, Sept. 8, 2019. (Credit: Paul Haring/CNS.)

There are 3,000 masons involved in the project, and work is never lacking. Akamasoa, created in 1989, defies reason in the eyes of many: The priest turned the site of a giant garbage dump – where children scavenged for food next to pigs and dogs – into a model city of 5,000 brick homes, schools, health care centers, playgrounds, and churches where some 10,000 people go to Mass every Sunday. All the buildings have electricity and hot water, something only 15 percent of Madagascar’s 28 million inhabitants have.

Opeka told Crux that the thousands who live in this city have been able to show that poverty is not fate: “But you have to believe that. You have to immerse yourself in the middle of them and stay with them.”

“The visit of Pope Francis had a very positive impact on all levels,” Opeka said. “His visit is and will remain as an indelible memory in the memory of our Akamasoa people, as it was a historic event.”

Though statistically speaking they have a better future than most in Madagascar, Opeka said that the people of Akamasoa continue to struggle day by day: “If the economic and political situation does not improve, then our people will suffer like all the others in the country. Here in Madagascar, there is an important demography growth, but what is worrying is that men do not feel like fathers and responsible for the children they have brought into the world.”

The entire project is conceived to fight welfarism, which Opeka believes “plunges the poor even deeper into misery and deeply damages the dignity of the human person.”

“The poor must take ownership of the work and of the projects designed to help them,” he said. “They must actively participate at all levels, so that this experience of resurrection and liberation lasts for a long time.”

Inspired by the work of Opeka, another Argentine, Gaston Vigo, decided to try to emulate the project in Argentina, a country where decades of economic mismanagement have led to large-scale poverty and hunger. An estimated 45 percent of Argentinians live below the poverty line, with 50 percent of children under the age of 18 living in poverty.

After a month with Opeka in Antananarivo, Vigo launched Akamasoa Argentina, Mas Humanidad.

Opeka never planned for the Akamasoa project to replicate, because he believes “the essential thing is to work sincerely and with real commitment with the poor where you are living.” Nevertheless, it “gave me great joy” that Vigo decided to launch the project.

“It is not easy to convince, mobilize and empower young people in any country in the world today,” the priest said. “It is necessary to ask the Holy Spirit for light, wisdom and inspiration to know how to attract young people and to interest and motivate them to fight for human and spiritual values such as justice, common good, fraternity, solidarity, truth, love and peace.”

“I have seen that his desire was true because it came from his heart and I have seen that he had a lot of respect and compassion for the poor to give them a hand and help them get out of the pit of poverty,” Opeka said of Vigo.

Akamasoa Argentina will be different to the one in Madagascar because the Latin American culture and customs are different from Africa, “but we will always be united by the same Spirit of serving the poor with faith and joy so that one day they themselves will be new servants of their brothers in poverty which they had overcome.”

A cornerstone in both cities of friendship is for the poor to work in building the homes they will live in. This, Opeka said, is because the forgotten of our society have to understand that they can rise to a more dignified life and stand up with their own sacrifices and efforts.

“They have to believe that they are capable of being responsible and that they have talents and that with work they can overcome poverty, which is not a fatality, but only the fruit of selfishness and human injustice,” he said.

Tags: Madagascar, Opeka, Pope Francis
← A Vincentian Minute: Virtue from the inside out-- Gentleness Uniting Action And Contemplation: the Way of Vincent →