By Margaret O’Dwyer, DC, with information from the United Nations

God knows how many areas of the world are desperate for peace.  Sustainable Development Goal 16  addresses the issue by calling for Peace, Justice, and Strong Institutions.  It challenges nations to work towards peaceful and inclusive societies for sustainable development, provide access to justice for all, and build effective, accountable and inclusive institutions at all levels.

Friday, September 21, is International Day of Peace. The UN’s General Assembly has declared it as a day devoted to strengthening the ideals of peace, both within and among all nations and peoples.   From 9:00-9:30 am this Friday, UN Secretary General Antonio Guterres will celebrate the International Day of Peace in the Peace Garden at the United Nations in New York, by ringing the Peace Bell and observing a minute of silence.

“…there is more to achieving peace than laying down weapons. True peace requires standing up for the human rights of all the world’s people.” — UN Secretary General Antonio Guterres

This year’s Day of Peace theme is: “The Right to Peace—The Universal Declaration of Human Rights at 70.” This landmark document was adopted by the UN General Assembly in Paris on December 10, 1948. 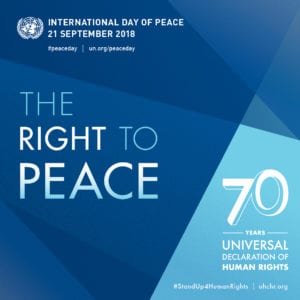 “It is time all nations and all people live up to the words of the Universal Declaration of Human Rights, which recognizes the inherent dignity and equal and inalienable rights of all members of the human race,” said UN Secretary General Guterres.

Guterres had issued a message on June 13 for the 100-day countdown to International Day of Peace:

“The International Day of Peace, observed every year on 21 September, embodies our shared aspiration to end conflict in all its forms and to safeguard the human rights of all people,” he said. “It is a day on which the United Nations calls for a 24-hour global ceasefire, with the hope that one day in our lifetime we will witness an end to violence.”

“Yet there is more to achieving peace than laying down weapons,” the Secretary General said. “True peace requires standing up for the human rights of all the world’s people. That is why this year’s theme for the International Day of Peace is: “The Right to Peace – The Universal Declaration of Human Rights at 70”.

“As the observance approaches,” Guterres said, “let us re-double our efforts to address the root causes of conflict and advance our work for the Sustainable Development Goals, including by promoting inclusive societies, providing access to justice and building accountable institutions.” 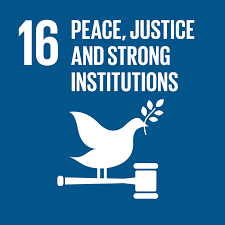 Let us stand up for human rights for all in the name of peace for all.

Although the Universal Declaration of Human Rights does not contain a specific article on “Right to Peace,” peace often can be achieved by realizing other human rights, such as those expressed in Article 3:  “Everyone has the right to life, liberty, and security of person.”  These elements build the foundation of freedom, justice and peace in the world.

On International Day of Peace, we can take several actions:

Support peace by seeking peaceful resolution of disagreements around us.

Engage by speaking up when others are at risk and standing up for others’ human rights.

Reflect on how each of us can honor and protect the rights of others every day.

The International Day of Peace was established in 1981 by the United Nations General Assembly. Two decades later, in 2001, the General Assembly unanimously voted to designate the Day as a period of non-violence and cease-fire.

The United Nations invites all nations and people to honor a cessation of hostilities during the Day, and to otherwise commemorate the Day through education and public awareness on issues related to peace.