The Ecstasy of the Saints: Mother Seton and Saint Vincent of Saragossa

Saints aren’t people who are in control. When faced with suffering, St. Vincent of Saragossa and Mother Seton responded by letting themselves be loved. They gave everything over to the One who loves us, who wants us unconditionally. And the fruit of such love is Ecstasy. 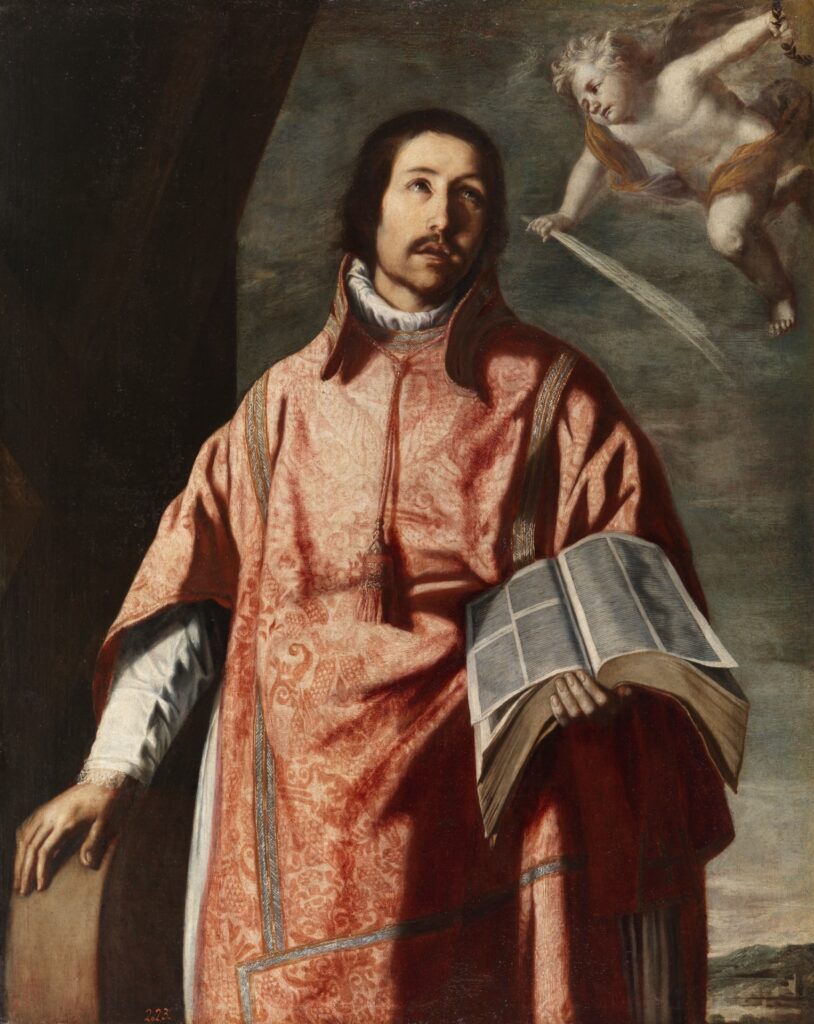 Today I write about ecstasy, that supernatural experience that is at once painful and sweet, agonizing and delightful. Such tangible joy in the midst of suffering has been enjoyed by many of the saints. The one we are celebrating today, Vincent of Saragossa, experienced ecstasy in his martyrdom. In the midst of torments, he knew sweetness. In the throes of suffering, he professed joy.

Vincent was a deacon assigned to Bishop Valerius in Saragossa, Spain, in the late second century. The bishop had a speech impediment, and the eloquent Vincent did most of the preaching for him. When the two were swept up in the persecutions of the Emperor Diocletian — which had the clergy as its first target — it was Vincent who did the talking before the governor Dacian. Threatened with torments if he did not renounce the faith and make sacrifice to the Roman gods, Vincent is said to have declared, “The greatest pleasure and the most distinguished honor that you can procure for us is to make us die for Jesus Christ. You may rest assured that you will tire of inflicting torments sooner than we of suffering them.”

Determined to test the validity of Vincent’s claim, Dacian ordered a series of tortures to be meted out upon the deacon. Vincent was stretched upon an X-shaped rack, roasted upon a gridiron, and “raked” by metal carding combs until his blood ran. When his tormenters saw that he still professed his faith in Christ, salt was rubbed into his wounds and he was thrown onto the floor of a cell that was littered with shards of broken pottery. But Vincent was not yet dead. In fact, not only was he not dead, but he was, if we might say this, living life with gusto. He was deliriously happy. In the midst of agony, Vincent was experiencing blissful joy. Ecstasy.

Of course, this only made Vincent’s tormenters more angry and more determined to wear him down. But his body was at this point so broken, that the decision was made to give him a rest. We should give him time to heal, they thought, so that we can try to break him again. So, Vincent was brought to a soft feather bed to recuperate. And there, in that warm, inviting spot, Vincent gave up his spirit. Vincent died for God in the lap of luxury. More ecstasy: the intermingling of sorrow and joy.

And what are we to make of this? I have to ask because I don’t know about you, but I don’t have a lot of experiences of sheer joy in the midst of pain! Ecstasy is not the norm for me. Pain is. Suffering is. Slogging through life is normal. Trying to make do is my daily bread. When joy comes it is almost barely perceptible. A sliver. A flash. A flicker of delight.

What I live seems to have little relation to what Vincent was living. And it is this very disconnect that makes me think I have to take Vincent’s story seriously. That, and the fact that such experiences of joy within suffering are seemingly common occurrences in the lives of the saints.

Let’s consider an example that is not quite as violent and intense as Vincent’s protracted agony, something closer to home. Here is a statement from St. Elizabeth Ann Seton: “It is very pleasant to have the name of being persecuted and yet enjoy the sweetest favours, to be poor and wretched and yet to be happy, neglected and forsaken, yet cherished and most tenderly indulged by God’s most favored servants and friends.”

At this point, Elizabeth was a widow with small children, a recent convert. Her sister-in-law Cecilia had also converted to the faith through Elizabeth’s example and encouragement, and a wave of recriminations had begun in the family. Angry letters flew back and forth, and Elizabeth, already dependent on the charity of others, foresaw the end of future financial support from her family. Yet, at the center of this maelstrom Elizabeth was overjoyed: “poor and wretched and yet happy.” Elizabeth gives us ecstasy in a more mundane, everyday form. There is no rack; no carding combs are sweeping her flesh, but she is suffering — and joyfully.

But how is she doing this? In the face of words such as these I am forced to reflect. What is it that I am actually doing when I suffer? I confessed it above. I am “slogging through life”, “trying to make do.”

I think I have embraced my cross and imagine myself dragging it heroically behind me. “I’ve got it,” I holler to the world. I’ve got this suffering thing. But the sad truth is, I don’t “get it” at all. In my “heroic suffering” I am actively professing the opposite of what Elizabeth lived. I refuse to really be “poor.” I won’t be “wretched.”

Which is to say that, despite all appearances, I am not really suffering in relation to God at all! I am manufacturing an image of martyrdom, dressing up my dramas with a spiritual cast. And thus — no surprise — I have no joy. Because joy is a gift, a grace, the overflowing abundance of an encounter with God. Joy comes when we suffer in total openness to him.

Let’s consider how Elizabeth suffers. In the midst of the family storm, Elizabeth does not pretend to suffer bravely. She does not project an image of being in control. She is exactly what she is: desperate, needy, poor, and wretched. She admits it and cries out for help. And almost at once, her Catholic friends respond to her cry: they send letters and financial aid. And Elizabeth laps up every bit of it with joy. Christ has found her through the eyes and ears and hands of her friends. In the face of her suffering, Elizabeth yields to Christ just as readily as Vincent yielded his spirit on that fat featherbed. She melts into his embrace.

Elizabeth’s secret is that she has no pride. She is weak, admits it, and waits for God to come. She lifts up her arms like a little child expecting the response of her father. She reaches out her hand like the beggar who waits for Christ on the path. And so, help, when it comes, is not the result of her hard-fought fight, the races she has run and won, but sheer grace, sheer joy.

There is no sanctity that comes by way of severity, and we get lost if we think that to be saints we have to place ourselves on the rack and put on a brave face. In the end, what God do we worship — the one who died for us or one who tells us to “suck it up?” We have to begin where Mother Seton did: we must let ourselves be loved.

Saints are not people who are in control. They are masters of themselves to the extent that they have given everything over to the One who loves them, who wants them unconditionally. And the fruit of such love is joy. Joy in suffering. Ecstasy.

LISA LICKONA, STL, is Assistant Professor of Systematic Theology at Saint Bernard’s School of Theology and Ministry in Rochester, New York, and a nationally-known speaker and writer. She is the mother of eight children.
Source: https://setonshrine.org/

Tags:
← I CIF in Asia for members of the Congregation of the Mission and the Vincentian Family A Vincentian Minute: Windows on Saint Vincent's Vision (Part 10) →