Editorial: The Death of Thousands of Migrants is a Disgrace and a Shame for all Humanity

Among the tide of terrible news that floods the various means of communication at the moment, two stories share the same characteristics and gravity: migrants from different parts of the globe who lost their lives on their journey of seeking a better existence, fleeing hunger and violence.

These tragedies are only two examples of the Way of the Cross that many immigrants, primarily from the Southern Hemisphere, must endure in their search for a better life.

While some leaders hide behind the need for orderly immigration and the preference for action in the countries of origin (which ultimately, never happens, is ineffective, and does not solve the serious problems of countries suffering from a situation of chronic war – as in the case of Sudan, the country of origin of most of the immigrants killed on the Melilla border), law enforcement officers often exceeded their duties and use excessive force.  This was borne out by António Guterres, Secretary General at the UN:

“I am shocked by the violence on the Nador-Melilla border on Friday which resulted in the deaths of dozens of migrants & asylum seekers. The use of excessive force is unacceptable, and the human rights and dignity of people on the move must be prioritized by countries.”

Stéphane Dujarric, a United Nations spokesperson, stated on Tuesday that both Morocco and Spain engaged in an “excessive” use of force:

“We saw the use of excessive force by the authorities, which needs to be investigated because it is unacceptable. […] People who are on the move have human rights, and those need to be respected, and we’re seeing them all too often disrespected.”

On Tuesday, June 28, The Committee on the Protection of the Rights of All Migrant Workers reminded all States that “immigrants should not be subjected to cruel, inhuman or degrading treatment or punishment. The obligation of States is to protect, respect and fulfil human rights of all immigrants at international borders.”

Nevertheless, the number of immigrants killed during their transit is shocking. According to the International Organization of Migration (OIM), an entity of the UN,

since 2014, more than 4,000 fatalities have been recorded annually on migratory routes worldwide. The number of deaths recorded, however, represent only a minimum estimate because the majority of migrant deaths around the world go unrecorded. Since 1996, more than 75,000 migrant deaths have been recorded globally. These data not only highlight the issue of migrant fatalities and the consequences for families left behind, but can also be used to assess the risks of irregular migration and to design policies and programmes to make migration safer. 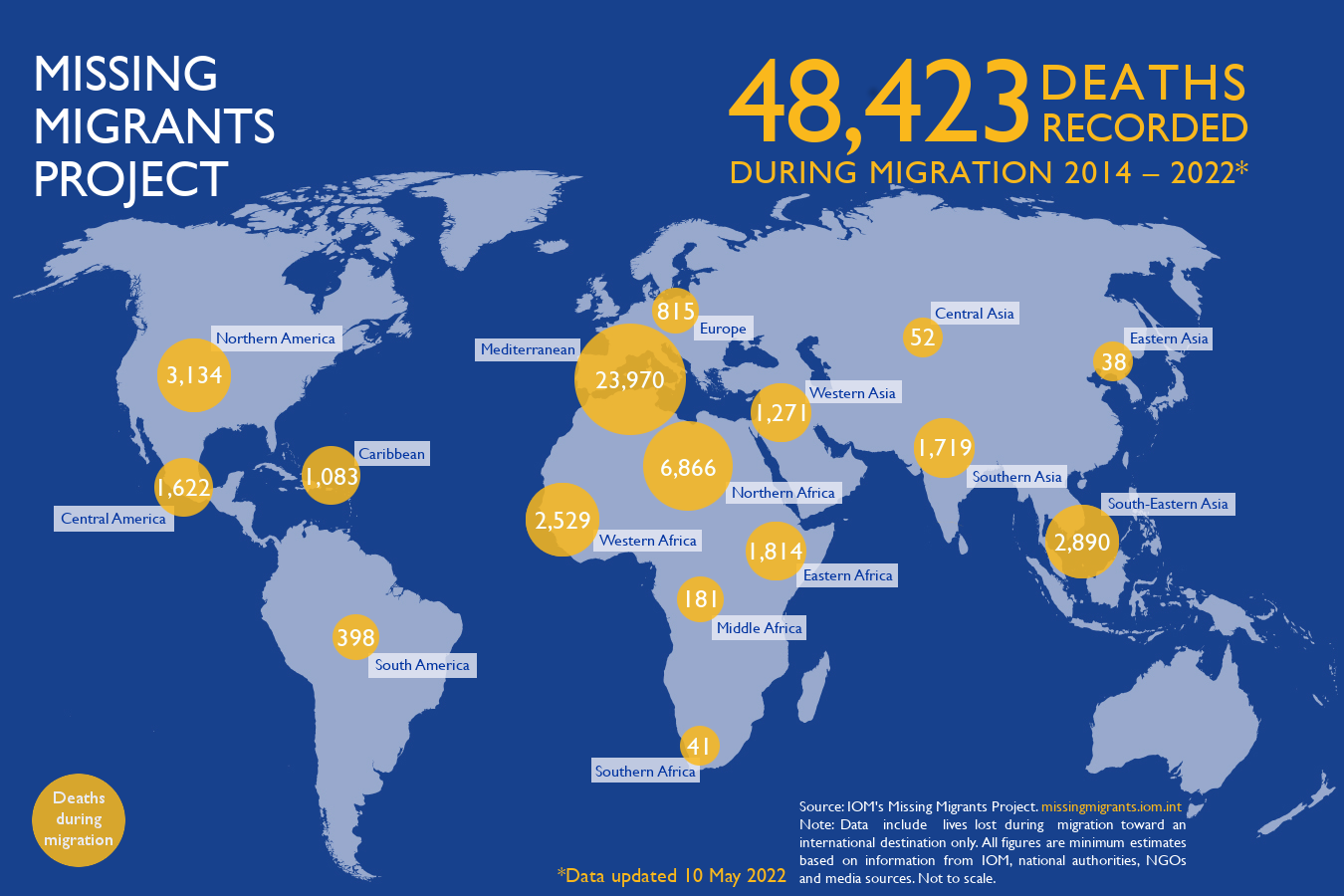 Source:  The International Organization of Migration (IOM)’s Missing Migrants Project, 2022. Data are compiled from a variety of sources including local authorities, surveys and interviews with survivors, IGOs, NGOs and media reports. Notes: (a) All numbers reflect only those incidents which IOM could verify – an unknown number of deaths remain unreported; thus these data are minimum estimates only. Comprehensiveness of data varies by region. (b) Figures include both bodies found and migrants who are missing and presumed dead. (c) Figures correspond to deaths that occurred during the process of migration. They exclude deaths that occur once in a destination country that may be indirectly attributable to a migrant’s legal status or immigration policies. (d) Names and boundaries indicated on map do not imply official endorsement or acceptance by IOM.

In light of this situation, we, members of the Vincentian Family, once again and in imitation of Saint Vincent de Paul, ask ourselves: “What should be done?” We know members of our Family who work with immigrants, both in Spain, on the borders of the United States, and in other countries. Many times, the necessary discretion of this ministry means that this type of work does not receive publicity in order to avoid “reprisals.” But in situations as horrific as those experienced in recent days in the United States and Spain, we cannot but denounce the practices that dehumanize people, and that take advantage of immigrants.

Indeed, welcoming the stranger as a brother/sister is a way of living the charism that we have inherited from Saint Vincent de Paul and Saint Louise de Marillac.