Dear members of the Vincentian Family,

May the grace and peace of Jesus be always with us!

Every year, the Church offers us the gift of the grace-filled period called “Advent” that helps us to prepare our hearts and minds in a special way for the Christmas season. Continuing the reflection on Saint Vincent de Paul as a “Mystic of Charity,” I invite all of us in this year’s Advent season to meditate on the indisputable and vital mission that the sick and elderly have in the Church and in the world, and, therefore, in our Congregations, Associations, communities, families, and groups.

If, on the one hand, society so often considers sick and elderly persons as useless for the development of a bright and hope-filled future for humanity; on the other hand, in the Bible, Jesus turns all those assumptions upside down, giving the sick and elderly a privileged role in the mission that the Father entrusted to Him to bring all peoples to Him, to His heart, to bring the Kingdom of God to its fulfillment.

This Biblical reversal derives from a radical distinction of who, in fact, is placed at the center. Who is the source for bringing the greatest meaning into our lives, to what we do, to that to which we dedicate all our gifts and talents? Who is the font of ultimate happiness and joy? It is not the human person who is put in first place, but God.

Society often puts the human person at the center insofar as the person is physically and mentally able to bring some profit to it; God has no place or, if He does, He is put in third or fourth place, according to an individual’s selfish views. The logical conclusion is that, at some point, the sick and the elderly become, as Pope Francis often repeats, “the discard of society” (cf. Fratelli Tutti, nos. 19-20, 278), no longer useful for bringing a bright and hope-filled future to humanity.

Saint Vincent spoke about the role of the sick on several occasions:

I’ve already said this many times, and I can’t help repeating it once more now, namely, that we should be of the opinion that those suffering from illness in the Company are the blessing of the Company and the house, and that we should consider this to be all the more true since Our Lord Jesus Christ loved that state of suffering, through which He himself willed to pass and became man in order to suffer (CCD XII, 26-27; conference 184, “The Good Use of Infirmities,” 28 June 1658).

We have good reason to praise God that, by His goodness and mercy, there are sick and infirm men in the Company who make of their inactivity and sufferings a theater of patience, in which they show forth all the virtues in their brilliance. We must thank God for having given us such persons. I’ve already said many times, and can’t refrain from saying it again, that we must believe that its sick members are the blessing of the Company (CCD XI, 61; conference 55, “The Good Use of Illness).

But for the Company—the poor Company—nothing special should be permitted either in food or clothing! I make exception, as always, for the sick. Oh, the poor patients! For them, even the chalices of the Church should be sold. God has given me tender feelings in that regard, and I ask Him to give this spirit to the Company (CCD XII, 334; conference 220, “Poverty,” [5 December 1659]).

In his message for the first World Day for Grandparents and the Elderly, Pope Francis quoted “a saintly elderly person who continues to pray and work for the Church,” Pope-Emeritus Benedict XVI: “The prayer of the elderly can protect the world, helping it perhaps more effectively than the frenetic activity of many others.” Pope Francis commented, “He spoke those words in 2012, toward the end of his pontificate. There is something beautiful here. Your prayer is a very precious resource: a deep breath that the Church and the world urgently need.”

The Pope further affirmed, “There is no retirement age from the work of proclaiming the Gospel” and defined the vocation of elderly people: “To preserve our roots, to pass on the faith to the young and to care for the little ones.” (Pope Francis, Message for the First World Day for Grandparents and the Elderly, 25 July 2021).

During the series of catechesis on the family, Pope Francis said: “The elderly are the reservoir of wisdom for our people! […] We must reawaken the collective sense of gratitude, of appreciation, of hospitality, which makes the elder feel like a living part of his community.”  A society that cannot show gratitude and affection to the elderly “is a perverse society. The Church, faithful to the Word of God, cannot tolerate such degeneration.”

“Where there is no honour for the elderly, there is no future for the young.” Moreover, “The elder is not an alien. We are that elder: in the near or far future, but inevitably, even if we don’t think it. And if we don’t learn how to treat the elder better, that is how we will be treated” (Pope Francis, General Audience, Wednesday, 4 March 2015).

Vincent understood these principles.  In the Common Rules, the first Constitutions of the Congregation of the Mission, he wrote:

One of the principal things Christ did was to visit and care for the sick, and especially persons who were poor. He very often recommended this to those He was sending into His vineyard. For this reason the Congregation should have a special care for helping and visiting the sick, whether outside or inside the house (VI, 1).

Wherever we visit a sick person, inside or outside the house, we should look on this person as Christ rather than as just a human being, since Christ said that He regarded any service done to such a person as being done to Himself (VI, 2).

Members of our own Community who are sick should remind themselves that they are not kept in bed, or in the hospital, just to be nursed and brought back to health by medical help. They are also there, as if in a pulpit, to witness publicly to Christian virtues, especially patience and acceptance of the Divine Will, at least by their example. In this way they can make Christ present to those looking after them and to visitors. And through their sickness they themselves can grow in virtue (VI, 3).

During this Advent, let us all discover more and more in our communities, families, and groups, the “living treasure” of our sick and elderly. They are the living presence of Jesus among us. They are Jesus, to whom we owe all our love, all the care we can humanly offer. They remain our teachers, models, and helpers in building a bright and hope-filled future, because it is Jesus who is speaking to us through them, showing us on what foundations we are invited to build our dreams, hopes, and objectives. We must not succumb to the mentality of some sectors of society who consider the elderly and sick as society’s trash: once the short-lived moment of joy is over, only sorrow, disillusion, frustration, and a meaningless life remain.

Vincent de Paul, in becoming a “Mystic of Charity,” came to understand and live the relationship with the sick and elderly as it was presented by Jesus.

May this Advent Season lead us ever more into the depths of Jesus’s message regarding the sick and elderly, so that, as we prepare to celebrate the Birth of our Savior, we might build together with them a bright and hope-filled future in the light of His presence. 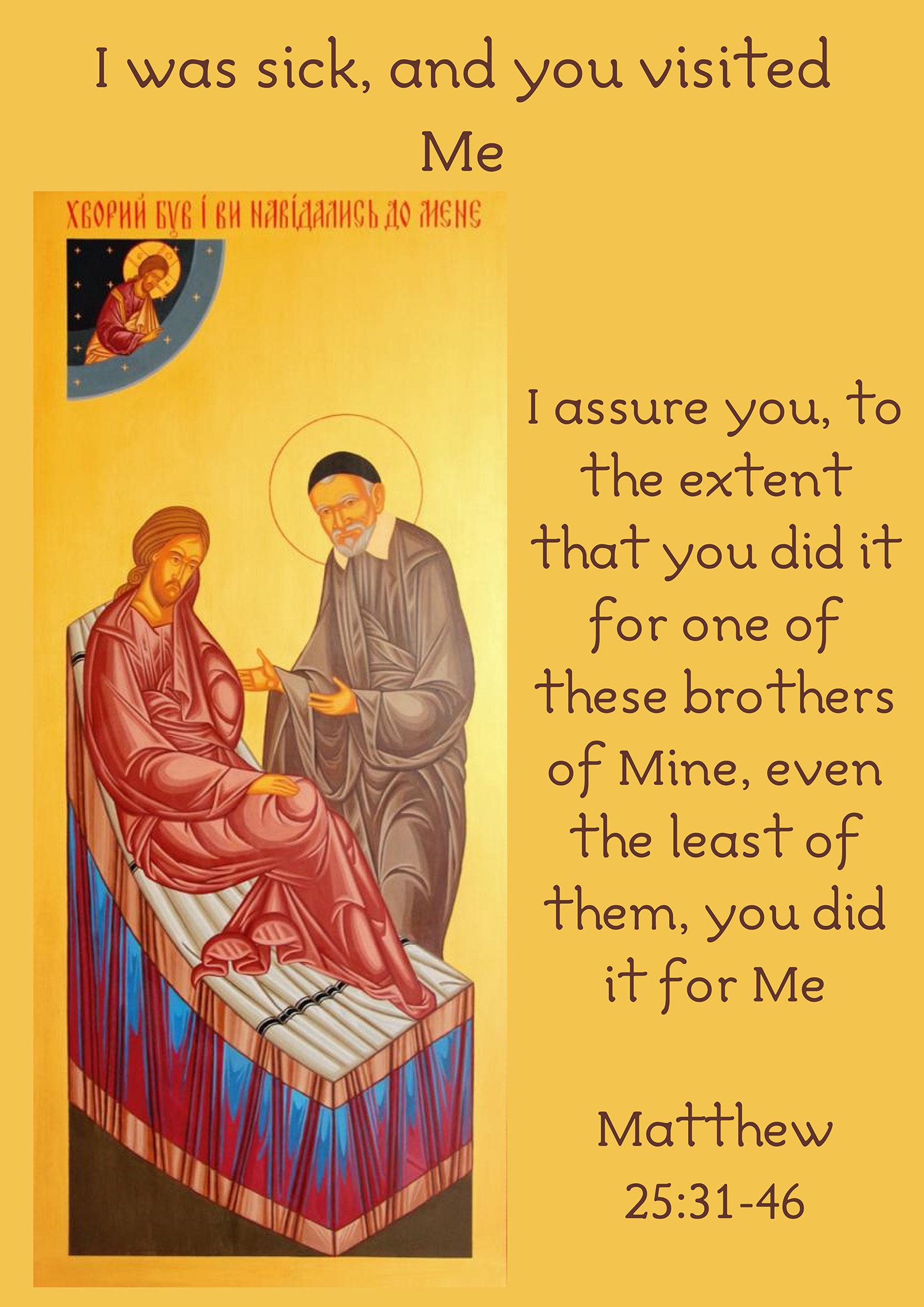