“To be with God and with the People of God”: the mission of the newly ordained priests in the Province of Vietnam

Despite the difficult situation caused by the COVID-19 pandemic, the Vietnamese Province of the Congregation for the Mission continues to reap the fruits of its intense vocation ministry. This is attested to in the Vincentian community celebrations in Vietnam this summer, generating new hope for the evangelizing mission. 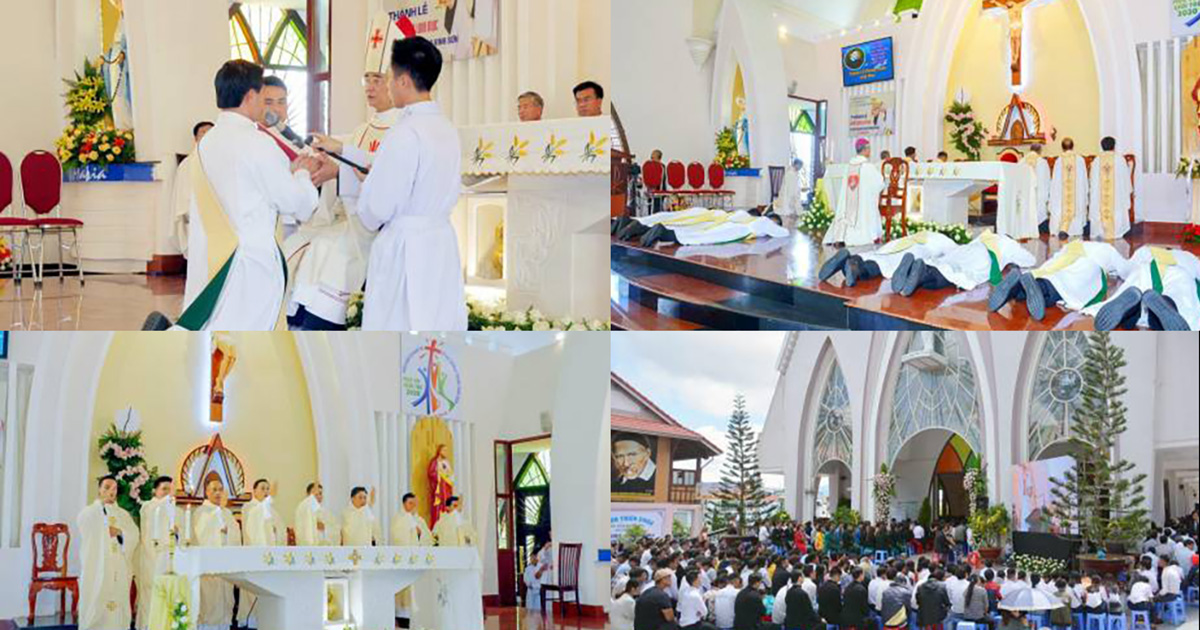 The Province of Vietnam communicated to Fides that on June 22, in the Church of the Sacred Heart of Jesus in Dalat, (the Motherhouse of the Vietnamese Province of the Congregation of the Mission), Bishop Dominique Nguyen Van Manh, Bishop of the Diocese of Dalat, presided over a solemn concelebration on the occasion of the priestly ordination of eight deacons. This ceremony took place in the presence of more than one hundred priests. Priestly ordination is a sacred celebration of joy for the entire community and the whole Church, because priests are gifts from God, stressed the bishop at the beginning of the Eucharist. In his homily, Bishop Nguyen Van Manh, addressed the candidates that he would soon ordain and recalled the two dimensions of the priesthood: being with God and being with God’s people. Recalling that Saint Peter overcame his weakness through the love and forgiveness of Jesus, the bishop stressed that priests are human beings who need the grace of God, especially in times of temptation. The bishop then stated: Only with the grace of God and prayer can priests remain faithful and vigilant.

On July 24, in the same Motherhouse, Bishop Peter Nguyen Van Kham, Bishop of the Diocese of My Tho, and Father Peter Nguyen Cong Tuan, CM, Visitor of the Province of Vietnam of the Congregation of the Mission, were witnesses at the profession of perpetual vows of eleven seminarians, members of the Congregation of the Mission. All those present, more than a hundred confreres, prayed that these deacons would soon be ordained. Then, on August 7, ten seminarists joyfully made their “good intentions” after a year in the Internal Seminary. At the same time, nineteen young men asked to be admitted into the Internal Seminary in order to learn to live as disciples of Jesus according to the charism of Saint Vincent de Paul.

The first members of the Congregation of the Mission arrived in Vietnam in 1952, and in 1955 the first house of the Congregation was opened in Dalat. There, the confreres dedicated themselves, among other things, to the mission among the indigenous people called “montagnards. Today, the Congregation has an autonomous province in Vietnam, divided into two regions, Dalat and Saigon. The Province is composed of 91 priests, and some 20 lay brothers and seminarians. It should be noted that the first three French Daughters of Charity arrived in the country in 1928, bringing to Vietnam the charism of Saint Vincent through evangelization and service to the poor.

The Congregation of the Mission (CM) was founded by Saint Vincent de Paul in 1625. Its members are, in some places, called “Lazarists” a reference to the Priory of Saint Lazare in Paris, where they originally resided. They are also known as “Vincentians” in English-speaking countries. Currently there are more than three thousand members of the Congregation throughout the world, divided into more than five hundred local communities (in ninety-one countries on five continents).

The Congregation of the Mission is a “Society of Apostolic Life” composed of priests and brothers, consecrated (through vows) to the evangelization of the poor. The main activities of its members are: popular missions, the formation of priests and the laity, spiritual retreats, missions  Ad Gentes  and concrete service on behalf of the poor.