Interview with Mother Alda Stroppiana, Superioress General of the Congregation of the Vincentian Sisters of Mary Immaculate

In January 2020, Rome will host a meeting of the Superiors General and Presidents of the Vincentian Family. We continue this series of posts to deepen our knowledge of the many Vincentian Branches. Here we interview Mother Alda Stroppiana, Superioress General of the Congregation of the Vincentian Sisters of Mary Immaculate. 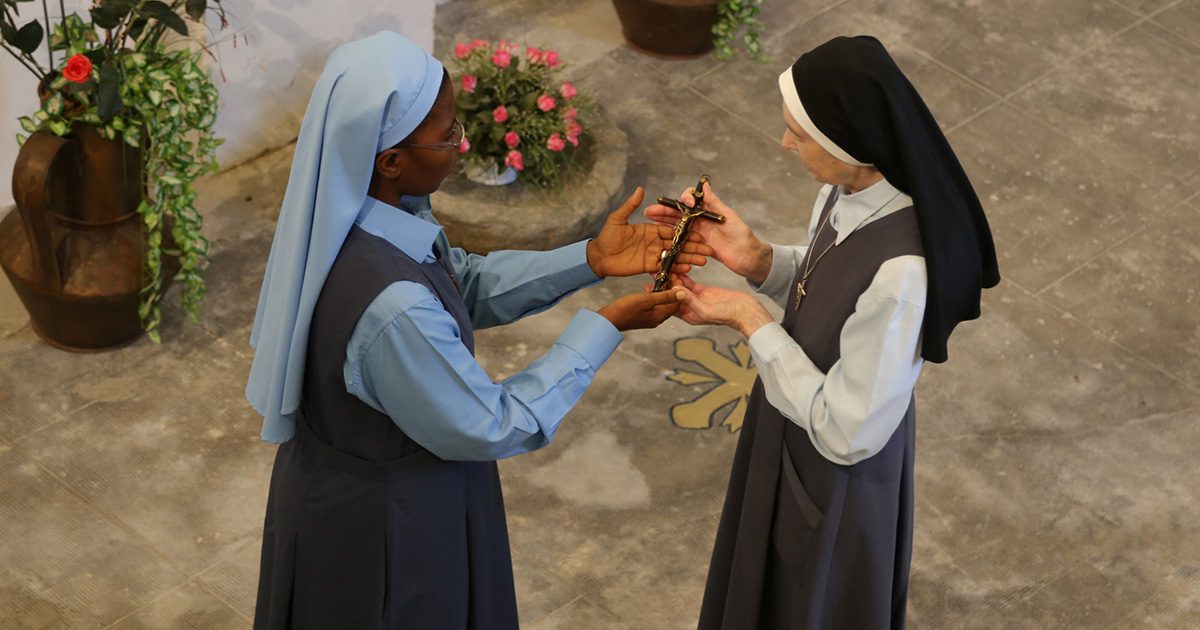 How and when did your foundation take place?

Article 5 of our Constitutions states: Our Congregation, established as a result of the urgent need for charity … On April 18, 1852, the theologian, Frederico Albert arrived at the parish in Lanzo (Italy) and began to minister there. As chaplain to the court he was appointed by the Archbishop to collaborate with those ministering in the parish of San Carlo in Turin. There he found himself assisting those who were poor (many of whom were living in attics). This pastoral experience made him very sensitive to the needs of the people, especially those who were poor and marginalized. His first biographer states that when the priest passed by the soccer field, the children who were playing there, ran toward him and he never rejected them. It was for these children who from their earliest years he wanted to orient toward that which is good, that he established a nursery … this center was entrusted to the Sisters of Charity of Saint Joan Antida (they were already ministering in the hospital in Lanzo). As a result of Father Albert’s sensitivity, an orphanage for girls was established in 1859 and then in 1866 a school for girls. All of these institutions were placed under the care of the Sisters of Charity of Saint Joan Antida, who’s superior, Sister Edvige ensured the good administration of these works.

When Father Albert thought that he had found a good system for the administration of his various foundations, misunderstandings and criticism arose. These criticisms revolved around the ministry of Sister Hedwig and the other Sisters involved in the different works. These criticisms reached the ears of the major superior in Vercelli who intervened without taking into account the version of events that was sent by the Father Albert in defense of the Sisters. On September 14, 1868 a decision was made to withdraw the Sisters from those works. This decision affected Federico Albert because a new school year was about to begin. Now Father had to find teachers and people who would administer these various works. He asked the heads of some religious congregations for Sisters. Father spoke with Canon Anglesio, the first successor of Cottolengo, who, instead of giving him Sisters said: Dear Vicar, choose young women who appear to be well disposed, begin to form them in your spirit and with the permission of their superiors, make them nuns of your own congregation. Meanwhile, during this coming year, try to maintain the works with lay personnel whom you trust. It should be noted here that Sisters Hedwig, who had been expelled from Lanzo, was never able to regain the trust of her superiors and in that same year, 1868, she left her Congregation. Then, finding herself with serious family and financial problems, she turned to Father Albert who though annoyed, understood his own needs and therefore received Sister. He found her lodging where she was able to work as a governess. Later, when he had to resort to lay personnel for his various work, he entrusted the management of the nursery to this former nun.

Father Albert prayer and decided to follow the advice of Canon Anglesio. He began to identify and provide spiritual guidance to some young women who gave signs of a vocation to religious life. He also began to draft the Rules of the congregation which he presented to the Archbishop of Turin, Riccardi dei Conti di Netro … the Rules were approved on March 19, 1869. He named this new congregation, the Vincentian Sisters of Mary Immaculate.

Father Albert wanted the first five nuns to bear the names of his mother and his four sisters. This small group was entrusted to the care of Sister Lucía, the eldest who bore the name of his mother.

A year later, on November 3, 1870, six other women entered the community. Upon reaching the number of eleven, the Sisters (in accord with their Rule) proceeded to the election of a superior. Sister Maria Maddalena Bussi (formerly Sister Hedwig) was unanimously chosen. She was esteemed and loved for her virtues which became more evident after the trials that she was forced to endure.

Unfortunately, Father Albert died prematurely and tragically only seven years after the foundation of his Congregation. At the time of his death, September 30, 1876, there were about twenty Sisters and the survival of this small religious family was not without difficulty. The promise, however, of the Founding Father was fulfilled: if the spirit of the Institute is carefully preserved, everything will always be fine, even though a miracle may be needed!

The number of Sisters remained modest, but the Congregation is still alive to celebrate the 150th anniversary of its foundation … and Father Albert’s story continues …

The charism which our founder gave us encompasses total dedication to our sisters and brothers, especially those who are poor. Furthermore, all our ministries of spiritual and corporal mercy are animated by a spirit of humility and charity which our Founder transmitted to the first Sisters. Our founder was a devotee of Saint Vincent de Paul and in the first Rule that was given to the Sisters, he included the Maxims of Vincent among the devotions that were to be observed. In accord with the teaching of Vincent de Paul, our Founder also highlighted poverty as an expression of our abandonment to Divine Providence.

What are your hopes and expectations for the Vincentian charism as we approach the meeting of the leaders of the Vincentian Family, scheduled for January 2020 in Rome?

We feel that within the worldwide Vincentian Family we are a very small group, but we are very happy to belong to this Family even though in many circumstances, because of the small number of Sisters (many of whom are elderly and/or infirm) we can only be present to the other branches through prayer. Such is our reality in Italy, but in Africa, more specifically in Benín, while our numbers are small, they are increasing. We hope that in the future we can be more present to the worldwide Family and thus better represent our Congregation in this large Family.