Vincentian Missionary In China And Brazil On The Way To Sainthood

The website of Society of Saint Vincent de Paul in Brazil announced that the Brazilian diocese of Ponta Grossa (state of Parana) sent a petition to the Holy See to begin the beatification inquiry of Fr. Vaclav (Wenceslau in Brazil) Szuniewicz, C.M., a Polish born missionary and surgeon who ministered in China and Brazil and died in 1963. 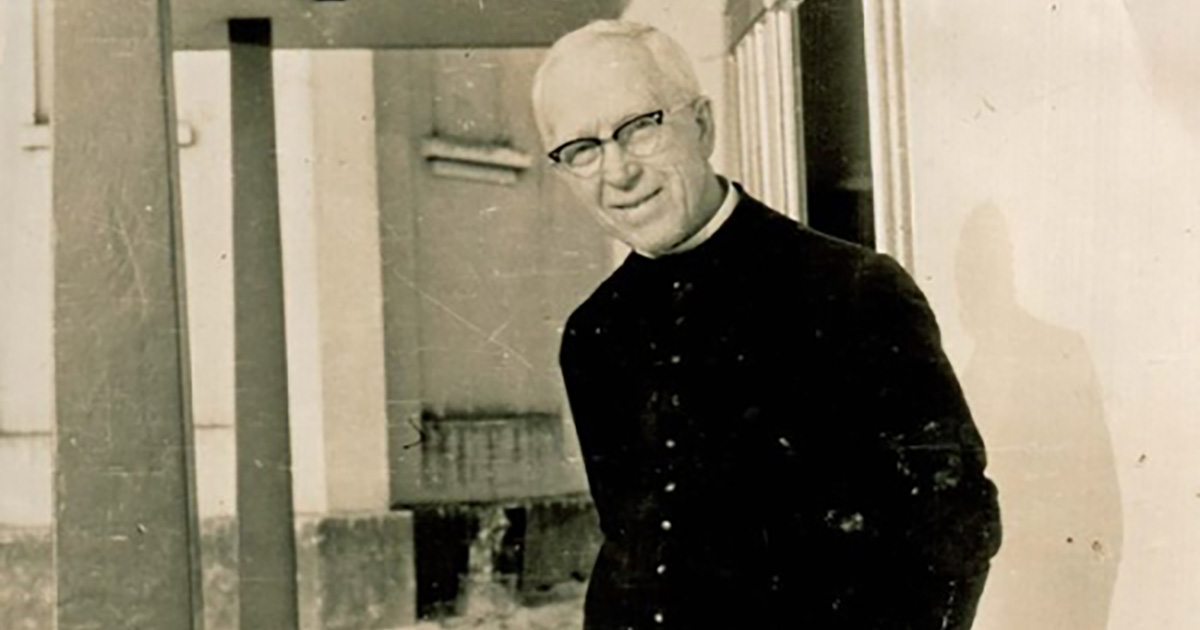 Father Vaclav Szuniewicz (in Brazil known as Wenceslau) [pronounce: Vatz-lav Shoo-nye-veech] was born on December 28, 1892 in the village of Głebokie in the diocese of  Vilnius, then part of the Russian Empire. He is the youngest child of the craftsman Romuald Szuniewicz and Paulina Cybulska, (a noble patriotic Polish family). In 1898 the family moved to Smolensk. When he graduated from the High School there, he continued his education in Moscow. In 1917 he graduated from the university as medical doctor. In the midst of the First World War he was immediately conscripted into military service and assigned to the Red Cross hospital in Smolensk and later to the public hospital in Voronezh. After the war, when his native Vilnius became part of the reborn country of Poland, he settled there. He was a pediatrician in the Pediatric Clinic of the Stefan Batory University in Vilnius from 1922 to 1926.

On April 23, 1927 he entered the Congregation of the Mission.  On September 8, 1930 Szuniewicz was ordained a priest and later in that same year, he was sent to the mission in China. He was one of four confreres in the second missionary group sent from Krakow to China … a group that included Fr. Martin Cymbrowski, (also a doctor). They left France for Shanghai on November 10, 1930. First Polish Vincentians were sent to China in 1929 when Fr. François Verdier CM, Superior General, asked the Visitor in Krakow to respond to the missionary needs in China. Forty Vincentian priests, brother and seminarians from the Province of Poland were sent to China between 1929 and 1947.

In China, Father settled in Xingtai, also known as Shunteh-fu in Hebei province, about 170 miles south of Beijing. There he ministered as a missionary and a doctor. In the beginning, he organized a hospital and dispensary with 19 beds. A few years later, the hospital had grown to be a 100 bed medical center with 18 dispensaries located 20 to 50 miles around Xingtai. Father Vaclav regularly visited all of them riding a bike. He was a pioneer in ophthalmic surgery because he became aware of the fact that glaucoma and other eye diseases were widely spread among local people. Thanks to his organizational abilities, he was able to perform 35 ophthalmic procedures a day! About 800 glaucoma surgeries were done each year, which is an incredible result especially when one takes into consideration the many varied technical limitations. The equipment and necessary medications were supplied primarily by the university hospital in Poznan, Poland. According to records for 1934 over 154 thousand ophthalmic procedures, surgeries and consultations were conducted in all the medical facilities organized and managed by Fr. Szuniewicz. In recognition of his work, he was appointed Director-General of all Catholic hospitals in Northern China. People from many rural areas walked to the hospital in Xingtai, like pilgrims journeying to a shrine. That hospital also became an academic center where many Chinese doctors learned and practiced ophthalmology.  It should be noted that this hospital is still functioning and the Communist administration transformed it into an academic institute and hospital named after Vaclav Szuniewicz, “ the Man with a Silver Beard” (Xuan Weiren – 宣尉仁) as they called him (he is recognized as an outstanding doctor, teacher, and academician).

In 1938 Father moved to Beijing. In three months, he established the Ophthalmic Department at the Catholic University Hospital. From December 1946 until February 1949 he worked in the French Province hospital of the Daughters of Charity in Tianjin, (a French hospital in Beijing) and finally in Shanghai, where he practiced in  two hospitals at the same time. The Szuniewicz mission was terminated in February 1949 when the Communist revolution forced all foreign missionaries to flee the country. Most of the Polish Vincentians who fled mainland China did not return to Poland because it was also under Communist control. Szuniewicz, like many others, relocated in the United States.

In 1904 the first Polish members of the Congregation of the Mission settled in New Haven, Connecticut to provide for the pastoral needs of the Polish immigrants.  A year earlier they arrived to Curitiba, Parana, Brazil (for the same purpose). The mission grew quickly and was most fruitful. In 1921 the mission in the United States became the Vice-Province of Poland in Utica. In April 1975 it was established as the independent Province of New England).  The mission in Parana developed in a similar manner. In 1921 the regional mission became the Vice-Province of Poland in Brasil. In September 1969 it became an independent province, the Province of Curitiba. Polish missionaries who fled China found refuge and shelter in both these communities, that is, in the United States and Brazil. 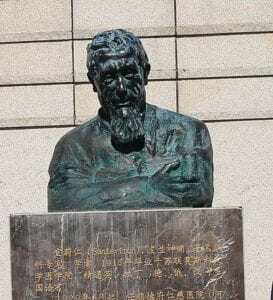 Statue of Fr. Szuniewicz in front of the ophthalmic hospital of his name in Xingtai (Shunteh-fu)

At first Fr. Szuniewicz settled in St. Michael the Archangel parish in Derby, Connecticut, a parish founded (1905) by the Polish confreres. A few weeks later he moved to nearby New Haven to St. Stanislaus, bishop and martyr parish, the Motherhouse of Polish mission in the United States which was established in 1904. In late 1949 , Father ministered as a vicar in the parish and a lecturer, researcher and academic in nearby Yale University. He continued his research on ophthalmic surgery and retinopathy which he began in Xingtai. Ministry, however, in the United States seemed “too comfortable” for him. Therefore, he decided to move to another place. In January 1953 he arrived in Vice-Province of Poland in Brazil. At first, he ministered in Mafra and then in 1953 he ministered in the parish of St. Michael in Irati, Paraná.

He practiced medicine until the time of his death. He spoke seven languages … in addition to his native Polish, he was fluent in Russian, Latin, Mandarin, English, French and Portuguese. All the years of his priestly life were spent in various countries … he never returned to his native Poland, yet was always mindful of his roots: Poland, my homeland remains the guardian of my soul, my opinions and my tongue. While living in Irati, he mainly dedicated himself to the area of social ministry. He established a dispensary and library. He practiced medicine in the local Charity Hospital of Saint Vincent de Paul (Hospital de Caridade São Vicente de Paulo). He also established a local community house of the Congregation in that place. Father Vaclav Szuniewicz died on October 16, 1963 and was buried in the municipal cemetery in Irati.

On the day of his death, the members of the state parliament of Parana gathered in session in Curitiba and commemorated his death with a moment of silence. It was later recorded in the minutes of plenary assembly. In 1968, the Irati Municipal Council honored him by naming one of the streets and a school in Villa Rio Bonito  after him.

Fr. Vaclav Szuniewicz, M.D. is still recognized as an outstanding ophthalmologist and researcher, a precursor of the surgical treatment of corneal astigmatism refractive surgery and retinopathy. The studies and research that he began in China were continued at Yale University. Some of these studies were further developed during his stay in Mafra, Brazil. The manuscripts of his studies and notes were never published under his name. Nevertheless, Fr. Szuniewicz and his work is still widely recognized among medical professionals. The surgical procedures that he developed in China are still used by some doctors in many parts of the world.

Recently, the local media (Radio Najuá or Folha de Irati) announced the initiation of the cause of beatification of  the “Genial Padre Doctor”.  On the occasion of the celebration of the feast of St. Michael, the Archangel (September 29), Bishop Braschi stated that he had recently met with the Superior General of the Congregation of the Mission, Fr. Tomaž Mavrič, C.M. who came to Parana to participate in the celebration of the 50th anniversary of erecting the Brazilian Province of the South (Province of Curitiba). He went on to say that they had talked and shared some details about the life and the cause of beatification of Father Szuniewicz. The bishop of the Diocese of Ponta Grossa has initiated the investigation and sent the petition to the Holy See to open the process of beatification.

Both the Bishop of Ponta Grossa and the pastor of St. Michael parish in Irati, Fr. Luiz Mirkoski asked people to share and provide any materials, photographs, recordings, papers and even their own testimonies with the parish and diocese. All of that material can be very helpful in developing the cause for beatification.  It is more than 50 years since he died, but his memory is still very alive among the people of Irati who look forward to the time when they will have a saint of their own.

Once the beatification process begins, the individual becomes a “Servant of God.” After careful investigation and verification of miracles by the Vatican, one then becomes “blessed” and then “saint.”