The late UN Secretary General Kofi Annan, said, “Violence against women is perhaps the most shameful human rights violation, and it is perhaps the most pervasive. It knows no boundaries of geography, culture or wealth. As long as it continues, we cannot claim to be making real progress towards equality, development and peace.”

One of the most heinous forms of violence against women is rape. Media speak of it happening along migratory routes, in homes, in university settings, in war, in prisons, at work places, and elsewhere.   About 35 percent of women globally have experienced some form of sexual harassment. According to Equality Now, rape and sexual violence have affected over one billion women and girls. Sadly, many rape victims do not seek help and even fewer seek the support of law enforcement.

Monday, November 25, is International Day for the Eradication of Violence Against Women, an occasion on which advocates worldwide will focus on changing the narrative. While the day stands for ending all forms of violence against women, it marks the beginning of 16 days of Action to End Gender Based Violence with the theme, “Orange the World: Generation Equality Stands against Rape!”  Orange the World runs through December 10, which is Human Rights Day.  Below you will find a document featuring a prayer intention for each of the 16 days of action.

Orange the World is part of the United Nation’s UNiTE Campaign. The UNiTE Campaign began in 2008 as a means of promoting partnerships to end the pandemic of violence against women and girls.  This year, it is asking people globally to learn more about, and take a stand against, rape.

Some steps we can all take to end rape include: 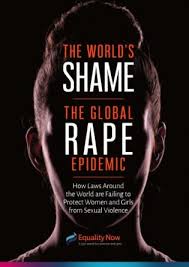 No doubt, there are many more actions we can take.  Of course, it is vital to support victims of rape through actions such as being compassionate, listening, and believing them; encouraging them to get medical attention; letting them know you understand it was not their fault;  encouraging the use of a rape hot line and the pursuit of counseling; and respecting their decisions about whether or not to go to the police.

In addition to addressing culture change, some areas of the world need to strengthen or modify laws dealing with rape.  Equality Now prepared a report which highlights gaps in legislation related to rape and sexual harassment.  Input derives from surveys in 73 UN member states.  The report is entitled, “The World’s Shame: The Global Rape Epidemic.”  It can be accessed by clicking here.

Some laws which need to be revised call for the release of perpetrators who reach a “settlement,” by actions such as marrying the victim, the report indicates.  Others allow rape in marriage.  Some legislation permits judges to reduce sentences based on stereotyped assessments of the victim’s behavior. Others don’t acknowledge that consent is impossible when the victim is dependent or vulnerable.  Advocacy is needed to rewrite such legislation.

Wouldn’t it be great if we could say to Kofi Annan, “we are now advancing towards equality, development and peace, because we’ve eliminated rape globally?”

Prayer Intentions for the 16 Days of Action