Murals honoring a DePaul basketball legend, the former Blue Demon football program, the university’s first building in Chicago’s Loop, and the creation of the school’s Black Student Union are the newest works in a multi-year public art project to memorialize key figures and moments in DePaul’s history.

Residing under the Chicago Transit Authority’s Fullerton ‘L’ station on the university’s Lincoln Park Campus, “The Story of ‘The Little School Under the ‘L’’ — Under the ‘L’,” began in 2016 and is the vision of muralist Brother Mark Elder, C.M., an adjunct faculty member in DePaul’s Department of Art, Media, and Design. 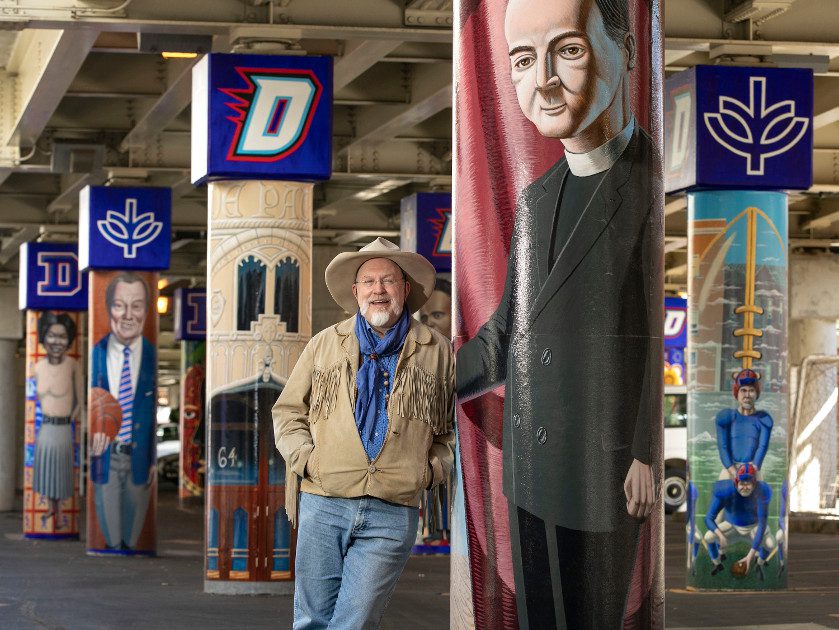 Brother Mark Elder, C.M., an adjunct faculty member in DePaul’s art, media and design program, has added four new murals to his public art project under the Chicago Transit Authority’s Fullerton ‘L’ station called “The Story of ‘The Little School Under the ‘L’’ — Under the ‘L’,” on the university’s Lincoln Park Campus. (DePaul University/Jamie Moncrief)

A dedication for the four new murals will be held at 11 a.m. Oct. 13 under the Fullerton ‘L’ tracks at Sheffield and Belden avenues. Attendance is free and open to the public.

Elder’s process from ideation to installation can take as long as 10 months. He finalizes the mural concepts in late fall, lays out and draws the murals during the winter, and works with a mural class of DePaul art students in the spring to paint the murals and prepare them to be moved under the ‘L’ tracks. A small group of students then joins Elder each summer for installation, where their hands-on work includes some final painting, preparing the canvases, and applying the murals carefully onto the pillars for drying. The murals, which are wrapped around the support pillars for the ‘L’ tracks, measure on average about 10 feet tall and eight feet in circumference.

“It’s important to have a passageway where our history is visible,” says Elder. “One of the goals of this project is to display in a tangible way the mission of the university and highlight the student experience.

“These new murals are an example of that. Mikan is a legendary, Paul Bunyan-type figure who was huge in the history of the early NBA. His early development through Coach Ray Meyer is legendary in its own way. With the football mural, it’s good for current students to know that we had the sport at one time and help explain why we don’t anymore. The 64 E. Lake St. building is an example of how we originally looked to meet the needs of students, and the founding of the Black Student Union is an important moment in the history of the university that helps explain how groups like it might shape the university going forward.”

In total, 25 murals will be installed, 24 to highlight DePaul’s history and a 25th — which is already installed — that gives an artistic overview of the project. Elder’s plan includes adding four murals a year for three more years to finish the project. Each row of murals represents a different 20-year period in DePaul’s history, starting from its founding in 1898 on the pillars closest to Belden Avenue and moving north toward Fullerton Avenue.

Tags: Congregation of the Mission, DePaul University, Mark Elder
← Information on the Vincentian Youth Encounter in Panama, January 2019 From Bella, home from Kitale →