What is the specific mission and origin of the Vincentian Foundation Louise de Marillac? Could you speak about the specificity of your charism and your relationship with the poor? What is your focus with regard to ministry on behalf of those who are poor?

The moral and Christian formation of its members and, in light of the Gospel, service on behalf of the poor, especially the elderly (through a program of Promotion, Prevention and Comprehensive Rehabilitation) is the FUNDAMENTAL BASE of the foundation. Members are guided and inspired by the doctrine and life of Saint Vincent de Paul and Saint Louise de Marillac.

On November 23, 2009, in the city of Cali, Colombia, (date on which the 100th anniversary of its establishment in Paris was celebrated), the First International Meeting was held in which the groups from Ecuador, Guatemala and Colombia participated. At that time we attempted to unify criteria and actions that favor the work of the Foundation according to the philosophy of the Vincentian Family. Also during that meeting, the International Statutes currently in force were approved.

For now we have no saints, blessed or servants of God, but God willing, this may come at a later time. The beatification of Sister Cecilia Charrín, Daughter of Charity of French origin, who founded the Louise de Marillac Association in Guatemala (March 15, 1937) is in process.

Following is the prayer of the Foundation, a prayer in which which we always entrust our actions:

O, good and merciful Father, who inspired Saint Vincent de Paul and Saint Louise de Marillac on the path to holiness through charity in service on behalf of the poor: we ask you to instill in each of the members of the Vincentian Foundation Louise de Marillac docility to the inspirations of the Holy Spirit and the virtues of humility, simplicity and charity. May we serve the poor as living images of your Son, dead and risen! May we also cultivate an environment of unity among ourselves as well as an environment of belonging to the Church, to the Vincentian Family and to all humankind! May we live holy lives in the light of the Master!

We ask this in the name of our Lord, Jesus Christ and through the most powerful intercession of the Blessed Virgin, Our Lady of the Miraculous Medal, of Saint Vincent de Paul and of Saint Louise de Marillac. Amen.

During this time of pandemic, what were the greatest challenges that you encountered?

In the beginning of the pandemic, the economic impact was one of the greatest difficulties, but thanks to the solidarity of our benefactors, that situation has changed. Also we care for a very vulnerable population, poor elderly men and women.

Likewise, we had difficulty in holding meetings with group members and even now we have been unable to get things back to normal. The majority of the members of the groups are older people who also experience many health problems … and this becomes an obstacle to our ability to serve the elderly. Thus, we are encouraging young people to join these groups, so that this legacy of service is transmitted to another generation and the mission can be continued.

As a Vincentian Foundation, do you have some special initiative/project?

As such, a specific project or activity does not exist. We continue our work in caring for the poor elderly who are without family and resources. Our purpose is to expand our ministry so that we are caring for 35 elderly people (currently we have 21, due to lack of resources and healthcare personnel). In that way more elderly people will be able to benefit from this ministry..

María Teresita participated in the meeting of International leaders in Rome in January 2020 and since then work has been done to comply with the request to become involved in work for the homeless. The Vincentian Foundation Louise de Marillac owns some land and Teresita’s goal was to build apartments for homeless people. This project has been very difficult to carry out due to the lack of resources and the death of Teresita who was the fundamental pillar of this work.

Finally would you share your experience as nation manager of the Foundation Louise de Marillac?

Since July 2006 I have been working at the Vincentian Foundation Louise de Marillac, in the group’s nursing home, in the city of Cali, Colombia. María Teresita Riascos Trujillo was the national and international president of this work for 40 years, and as a result of my work with her I was formed in the Vincentian Family.

In January 2022 I was chosen as the representative of the group at the national level. Since then, with accompaniment of Sister María Doris Ángel, advisor and counselor of the national Vincentian Family, we have worked on the restructuring of the groups of the Vincentian Foundation Louise de Marillac … groups that had become scattered. This initiative is intended to provide the members of the Foundation with new animation and oversight, something that could not be done during the time Teresita was there. The goal is to give a new impulse to the groups, with new members full of love for God and willing to serve God in the person of the elderly poor.

It has been a very beautiful experience. I have received spiritual counsel and this year, during the Feast day celebration of Saint Louise de Marillac I made my dedication to service at the Vincentian Lpuise de Marillac Foundation. I know that Teresita, from heaven, is helping by conquering and accompanying, because it was she who fought so much for this group. Now, from the heavenly homeland, she will continue to guide us and to lead this group in the ways of God as the members engage in service on behalf of the poor. 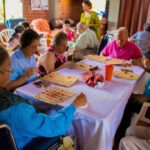 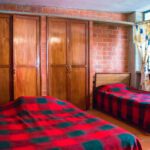 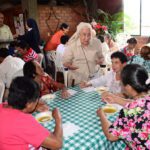 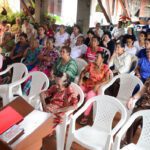 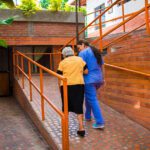