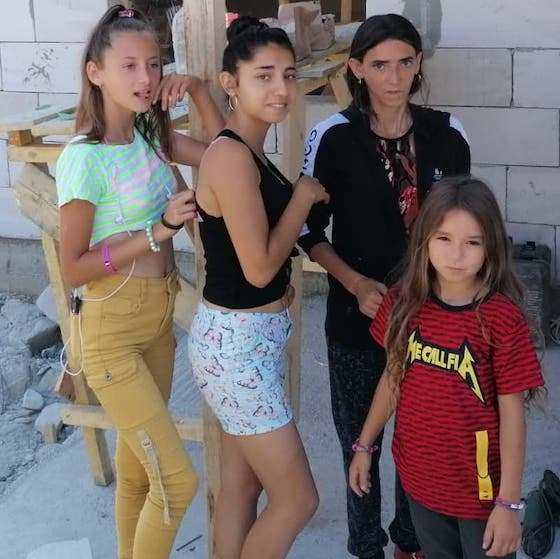 Mihaela used to go to sleep worrying that the house would fall on her and her family. She lived with her mother and her four children, aged between 14 and 7 in a tiny house in Iasi, Romania second largest city. “We felt deprived of any hope, of protection during that period of 10 years. The insecurity that we felt was very strong. Every night we were going to sleep fearful because we didn’t know if we would wake up the next day”

Because of a difficult financial situation, she was not able to maintain the house and it deteriorated gradually. “That fear was a stress on us and the children went to school with the uncertainty of worrying that the house would not be there after they came back home from school. It was a very hard time for the entire family.”

Their lives changed thanks to the initiative of the local SSVP and the “13 Houses” Campaign. “The idea for this project came at that moment when I received the “13 Houses” booklet”, says Ana Dobos, the project coordinator and SSVP member. “The house was ready to fall  down at any moment  and the family could not spend one more year in that old house. And then, God enlightened me and directed me to the Famvin Homeless Alliance. I would have never thought that there are people who are waiting to  to give us their help.. The miracles are done by God through people. I would like to give thanks to God for sending me the right people to give their help to  the project. Nevertheless, I would like to send all my grateful words to you for everything you have done for us.”

The construction for the houses started in late July due to the Covid19 restrictions. The construction team of four people completed the main structure in two weeks. The painting, insulation and the door and windows were finished a few weeks later. “We have seenthe house and we moved into it, but we still can’t believe it’s ours!” Says Mihaela. “Our joy is overwhelming , now that we can live and stay in the house without any  stress. We have two rooms, we can also organize the place inside as we want, we feel great. We also live with dignity, we have a place to clean, a place to put our clothes, a place where we can study and a place where we can play together, stay together.”

“The children are very happy; they’ve seen the house being  built but they can’t believe it either.  Now, they go to school happy because after school they have  a place to prepare their lessons and homework. These children will have more confidence in themselves, will have the courage to learn many new things with a peaceful mind and an open heart”. But what is more important from this project, is that the children learnt that “the love between people can make the dreams to become true”.

The family was born again, and the children have a new chance to study and to go to school. They will have a lot of confidence in themselves and in others and  certainly they will feel that they are not alone. God performed a miracle through people for people