The conferring of this award to Fr Tom Smolich SJ, the International Director of the Jesuit Refugee Service (JRS) was part of the official events held at the Annual Meeting of the Council General International (CGI) – Paris in 2020.

The JRS has been awarded the “Charity in Hope” Medal. This distinction, bestowed by the SSVP’s CGI, is in recognition of the inspiring actions of those “serving in hope,” while forging closer ties with people and/or institutions with whom the SSVP share common goals and projects, especially as our planet is going through a difficult period.

The medal was awarded on December 13th, at the “CGI’s Annual Meeting – Paris 2020”. Due to the pandemic, the ceremony was held virtually, and was attended by Fr Tom Smolich SJ, the International Director of the JRS, who heard the news from the SSVP’s President General.

Renato Lima stressed that the Jesuit Refugee Service was an outstanding initiative by means of which the Catholic Church accomplishes the concrete mission – devoid of theory or vacuous speeches – to help those who were forcibly displaced due to war, conflict, famine, economic circumstances and political or religious persecution: “Humankind – said the SSVP’s President General – cannot be sufficiently grateful for the brilliant work carried out by the JRS to protect the most vulnerable and marginalized. They help those most in need in the world, those who left their work and are separated from their families, seeking better living conditions elsewhere. Human beings, children of God, who deserve a decent living. Congratulations! All Vincentians are full of joy and recognize your work.”

The JRS recently marked its 40th anniversary (November, 2020), with over 811,000 individuals who are direct beneficiaries of JRS projects undertaken in 54 countries around the world. The main JRS areas of work are in the fields of education, emergency assistance, psychological support, material aid and formation for their socio-economic integration as well as their pastoral care. https://jrs.net/es/home/

This is the 3rd edition of the award ceremony of the “Charity in Hope” Medal; so the JRS joins the two previous awardees: the Rotary Club International (2018) and the World Organization of the Scout Movement (2019).

As of now and until March 1st, 2021, the member countries of the SSVP’s International Confederation can apply for the 4th edition of the “Charity in Hope” Medal, which will be awarded, God willing, in September 2021 at the next CGI’s Annual Meeting in Madrid. 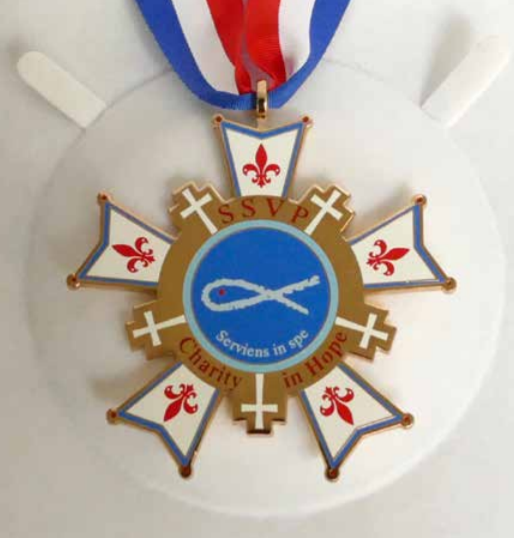