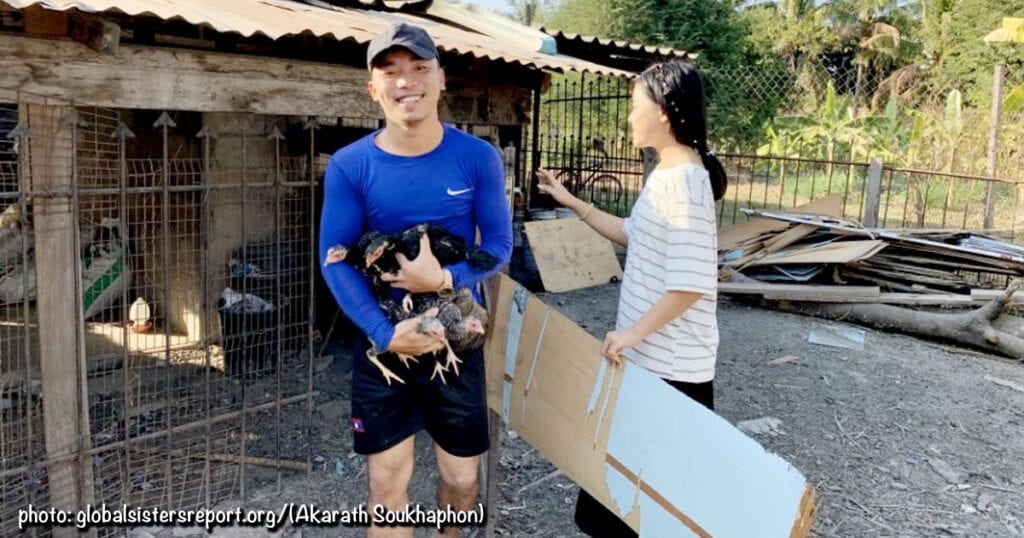 VIENTIANE, LAOS — Tucked away behind bustling storefronts, less than 3 miles northeast of the Sacred Heart Cathedral in the capital city of Vientiane, a center run by the Sisters of Charity of St. Jeanne-Antide Thouret provides poor young people from across Laos with a place of refuge and opportunities to seek a better life.

The congregation in Laos established the Nazareth Center in 1993 as an orphanage, but over the years it evolved into a center offering vocational training and housing for students from poor ethnic minority families who want to study in Vientiane.

The 12 young men and 36 young women are enrolled in an onsite sewing program or in offsite classes, including technical, accounting and motorcycle-repair programs, at different schools in the capital. The center began accepting students for vocational training in 2015 and for an onsite sewing school in 2017.

The young people’s day starts with Mass, followed by breakfast and morning chores, said the 70-year-old sister. Students then either walk to school or ride their bikes or motorcycles. A few return for lunch, while most come back in the late afternoon.

Before dinner and evening prayer, groups of students perform chores, including sweeping, cooking, feeding the ducks and chickens, and watering the gardens. They rotate chores every week, and group leaders are replaced often, providing all students the opportunity to practice leadership skills regardless of age, said Phasangkhonesy, who still toils in the garden, tending to the animals and instructing the young people in the center.

“We want to help the people in Lao society who lack opportunities,” said Sr. Latsamy Savivanh, director of the Nazareth Center. “We want to give them a future, skills they can use to earn a living.”

After the students have completed their studies, Savivanh said, the sisters continue to follow up with their development by allowing them to stay at the center until they find jobs, or help connect them with employers in Vientiane or in other provinces.

The young people belong to various ethnic groups — lowland Lao (which is the majority ethnic group), Hmong, Khmhu, Tai Meuy and at least four other ethnicities. “We cultivate an environment where all cultures are respected and celebrated. We have special days when students can share their ethnic cultures through performances and learning opportunities,” Savivanh said.

Vanhny Sinsomboun, 19, who came from a poor family in Pakse in southern Laos and is the oldest of five children, said she hopes that she can turn her sewing skills acquired from the center into an opportunity to pursue further studies in fashion design. “I am grateful for the opportunity to get an education,” said Sinsomboun, who has been at the center for two years. “I want to help others do the same in the future.”

Phonexay Phomvihan, 23, who has been at the center for three years, also came from Pakse. He said the Charity sisters in Pakse encouraged him and Sinsomboun to go to Vientiane to pursue their education. He is now studying information technology at the Lao-Viet College in Vientiane. “I don’t know where I would be without the center,” said Phomvihan, whose parents are dead.

He is grateful to the sisters for his overall development. Other students at the center also expressed their gratitude to the sisters.

A shop at the center also accepts sewing orders from customers. Work is divided up among students who have finished the sewing program, and revenue is divided among the former students and the center. Raising livestock and growing vegetables on the grounds have not only helped the center be more self-sustainable, but have also provided opportunities for the young people to work together, Phasangkhonesy said. They also seem to enjoy the community aspects of sharing in the labor, she said.

The center is primarily funded by the Sisters of Charity, though donations from visitors also help, Savivanh said. “We welcome all guests to the center,” she said. “We encourage our students to be hospitable to our visitors,” she said, noting that their presence helps remind the students that their work at the center has value.

While the center is near capacity, she and other sisters want to help more young people but cannot, due to the lack of funds.

Ties to donors could help achieve those goals. Mayhoua Moua, who runs the nonprofit Milwaukee Consortium for Hmong Health, told GSR that in order to help the Nazareth Center, she has bought handicraft items, such as purses, tablecloths and wallets, from the center as gifts for friends.

Now U.S. citizens, Mayhoua Moua and her husband, Zongcheng Moua, also set up HOPE Foundation to raise funds for the various ministries of the Sisters of Charity in Laos, such as a center for the deaf and mute in Luang Prabang, in the north of the country.

Laos has some 7 million people, about 45,000 of whom are Catholics in the four apostolic vicariates of Vientiane, Savannakhet, Pakse and Luang Prabang. There are some 60 sisters in the congregation living in 15 houses in all four vicariates. The Nazareth Center is now run by three Charity sisters — Savivanh, Phasangkhonesy and Sr. Noimanee Keosouvanthong, 36.

Recalling the history of the center, Phasangkhonesy said Sr. Marie Catherine Dung, who is Vietnamese and now in her 80s and retired, purchased the land for the center many years ago. At the time, the property was needed because the sisters wanted to have an additional orphanage, as orphanages run by the sisters in Savannakhet, in central Laos, and in Vientiane had become overcrowded.

Phasangkhonesy said she was happy when she received the appointment in September 2018 to join Savivanh to work with the young people.

Talking about her religious life after the communist regime took over the country in 1975, she said she joined the Sisters of Charity when she was 18 years old. Growing up with her Catholic grandmother, Phasangkhonesy was introduced to the Sisters of Charity at an early age. Studying with the sisters in Pakse and living with them while attending secondary school in Savannakhet in western Laos, she became fond of them and attracted to their service to the poor.

Savivanh, 40, was born after the communist Pathet Lao leaders took control of the country in 1975.

Life in landlocked Laos in the 1970s was truly a tumultuous time. After the 1975 takeover by the communist Pathet Lao leaders, hundreds of thousands of people fled the country for fear of persecution. A majority of the Lao refugees were settled in the United States, Australia and France.

Meanwhile, in Laos, the changing political climate reached every segment of Lao society, including religious institutions. Many priests, including the present apostolic administrator of Vientiane, Cardinal Louis-Marie Ling Mangkhanekhoun, were detained for their faith.

Phasangkhonesy recalled how she and other religious men and women suffered greatly under the new communist regime. When asked about her experience during this time, she paused briefly looking away to the far distance, and answered, “I was not afraid. I was not afraid.”

Many sisters from her order made the difficult decision to leave Laos, she said. Those who, like her, chose to stay lived under constant surveillance and were separated from their religious communities in Laos and abroad.

Relocated to the rural areas of southern Laos, Phasangkhonesy spent years isolated from her other sisters, spending her days raising livestock and growing vegetables in a predominantly Catholic village. Still, she added, her safety was always precarious, as she was constantly reminded to refrain from the work she had been doing years prior — teaching young people and cultivating the faith.

It would not be until 2005 that she was able to leave her village, an indication of the softening of religious restrictions in decree and practice, even though state monitoring and scrutiny still prevent some activities. She said communication with other sisters abroad was also allowed once again. Despite the limitations, she returned to teaching, accepting various assignments throughout Laos until 2018, when she joined Savivanh and at the center.

By helping young adults, Savivanh said, the sisters are having a wider effect. “We want to help the whole society,” she said.