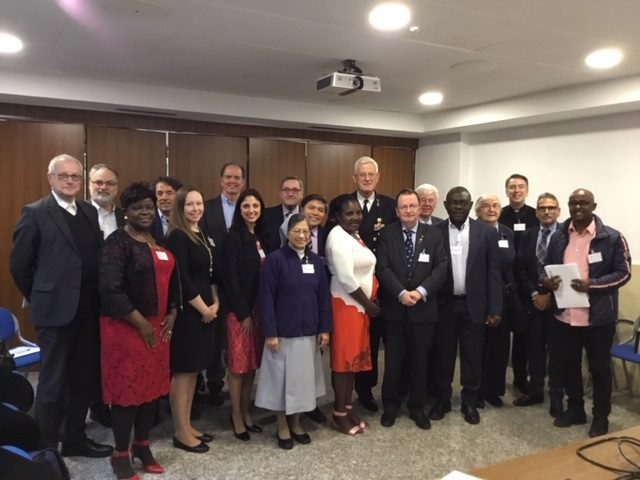 Catholic nongovernmental organization representatives met with Pope Francis, December 7, during the IV World Forum of Catholic-inspired NGOs in Rome. Among the audience was Sr. Catherine Prendergast, DC, the lead representative of the Company of the Daughters of Charity to the United Nations.  Her office is located in Geneva.

The theme of the meeting was “inclusion.”

“I thank you for this initiative, by which you wish to offer a concrete testimony to help the most vulnerable to be accepted and included, and thus to make our world a ‘common home,’” said Pope Francis.  “You accomplish all this with experiences both on the ground and in the international political context.”

“Many of you are concerned to be present in the places where discussions are taking place about human rights, people’s living conditions, habitat, education and development, and other social problems,” said the Pope.  “In this way, you demonstrate what the Second Vatican Council referred to as “the presence of the Church in the world, and her life and activity there” (Gaudium et Spes, 40). For the Church, those places are a “frontier” where she can play a significant role.”

“Different Catholic international bodies can assist the community of nations on the way to peace, sisterhood, and brotherhood; these bodies should be strengthened by increasing the number of their trained members, by increasing the subsidies they need so badly, and by suitable coordination of their forces.”—Pope Francis

During the gathering, held in the Vatican Apostolic Palace, Pope Francis called upon NGOs to focus upon three matters—formation, the necessary means (to achieve NGO goals), and coordinating initiatives through teamwork.

“Different Catholic international bodies can assist the community of nations on the way to peace, sisterhood, and brotherhood; these bodies should be strengthened by increasing the number of their trained members, by increasing the subsidies they need so badly, and by suitable coordination of their forces,” Pope Francis said.

In terms of formation, the Pontiff called for a consistent witness of life, great faith, as well as suitable professional preparation in scientific and human affairs.  He encouraged NGOs to be well trained in the social doctrine of the Church so as to translate it into their projects.

“The need to provide adequate training and education as a means of confronting the complex issues of contemporary social and political life represents a priority commitment for the Church today,” the Pope noted.

He next focused upon the importance of having the necessary means to achieve goals.  But he recognized that sometimes those means are insufficient.

“We should not become discouraged, but keep in mind that the Church has always accomplished great works with limited means,” commented the Pope. “Certainly, those means need to be found and our talents used in the best way possible, but in a way that demonstrates that all power comes to us from God and is not our own.”

The third topic was teamwork, which seemed in keeping with the Vincentian Family focus on collaboration.

“Cooperating in shared projects makes the value of our works even more evident since it brings out something connatural to the Church: her communion, her journeying together (syn-odos) in the same mission in service of the common good, through “co-responsibility” and the contribution of everyone,” said Pope Francis.

At the United Nations, Vincentian Family NGOs collaborate through regular meetings and contributing their talents towards common goals.  In example, they worked together with various NGOs towards the adoption of a resolution related to homelessness, during February’s 58th Commission for Social Development in New York.

“Today’s world is calling for new boldness and new imagination in opening new paths of dialogue and cooperation, in order to promote a “culture of encounter”, where, in accordance with the creative plan of God, the dignity of every human person is foremost,” said the Pope.

In conclusion, the Pope said, “Dear friends, the Church and the Pope need your work, your commitment and your witness at the frontiers of the international community. Move forward with courage and ever-renewed hope. Many thanks.”

Tags: United Nations
← Lenten Video Series: Day 7, Acceptance What Can We Do About Homelessness? →