‘A True Saint’: Sister Hilda Alonso, Pioneer of the Daughters of Charity in Miami, Dies at 101

Miami’s Catholic Church has lost one of its venerable pillars.

Sister Hilda Alonso, a Cuban nun who founded the Daughters of Charity of Saint Vincent de Paul in Miami, was dedicated to the care of the poor, and was principal of the Catholic school Colegio La Inmaculada in Havana, died July 5 in Miami. She was 101.

She died peacefully at Casa San Vicente de Paul, the convent in the Flagami area where the Sisters minister on behalf of low-income families, providing them with spiritual support, food and other aid, said Sister Eva Pérez-Puelles, the Superior of that house.

With her love of Christ and a life of deep contemplation and prayer, Sister Hilda was a bearer of joy and hope to the most marginalized in society, not only in Miami and Cuba, but also in Puerto Rico and Haiti, where she founded the mission of the Daughters of Charity. She came to Miami, accompanied by a delegation of five Sisters, in the summer of 1971, accepting an invitation from then-Miami Archbishop Coleman Carroll. In the decade before, thousands of Catholic Cubans arrived in Miami after Fidel Castro rose to power and the Archdiocese sought the Sisters, among others, to provide pastoral care to the new parishioners. 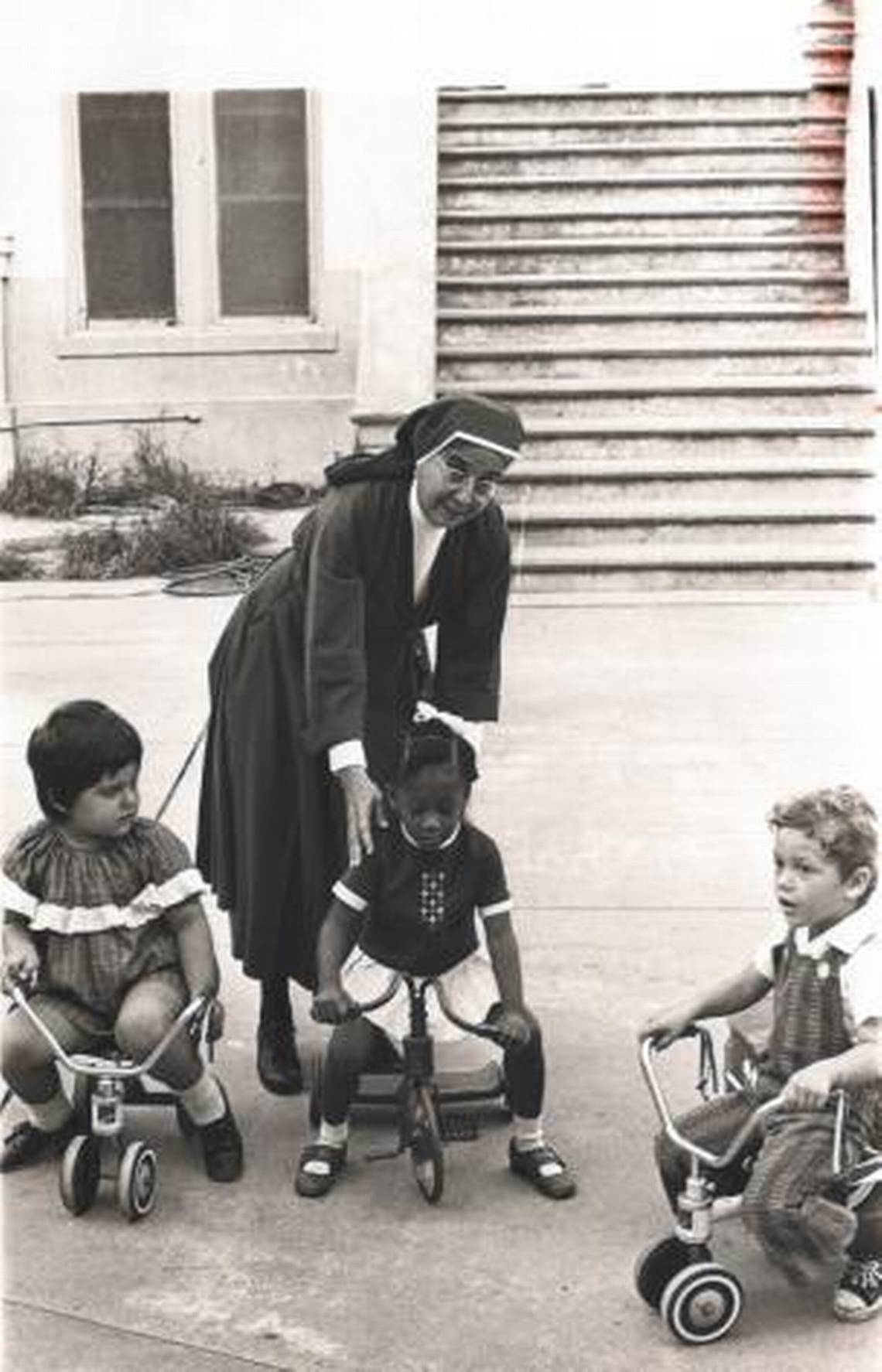 “Employment assistance was offered, clothes were donated, and Sister Hilda was involved in all that,” recalled Father Eduardo Álvarez, current pastor of Gesù. “She was a true saint, because she helped thousands of people, not only as a teacher, but also as a charitable relgiious woman.”

A year later, Father Agustín Román, rector of the Ermita de la Caridad — Our Lady of Charity shrine adjacent to Mercy Hospital — asked Sister Hilda to provide Daughters to support him in providing services to pilgrims who visited the shrine yearning for consolation and strength.

Both Román and the Cuban faithful already knew the vast social work that the Daughters of Charity had carried out on the island since their arrival in the mid-19th century (providing services in health, education, and care for orphans, the sick and the elderly). Only the Sisters’ habit had changed, for they no longer sported, as part of their religious habit, the bright, starched flapping headdresses that covered their heads like a flock of white doves. She studied at Colegio La Inmaculada until high school and, in 1946, she obtained a Ph.D. in education from the University of Havana. That year she entered the Company of the Daughters of Charity of Saint Vincent de Paul, and she made her first vows in 1951.

Until 1959, she was leader of La Inmaculada, where the Daughters of Charity in Cuba was also based. Saint Vincent de Paul and Saint Louise de Marillac founded the religious order in France in 1633 with the mission of serving the poor in their homes and, later, in hospitals. That missionary spirit continued through the centuries, and today the Daughters of Charity have a presence in 96 countries.

At La Inmaculada, one of Cuba’s iconic Catholic schools, Sister Hilda strongly advocated for the education of Cuban children and opened the doors to girls whose parents could not afford the tuition. 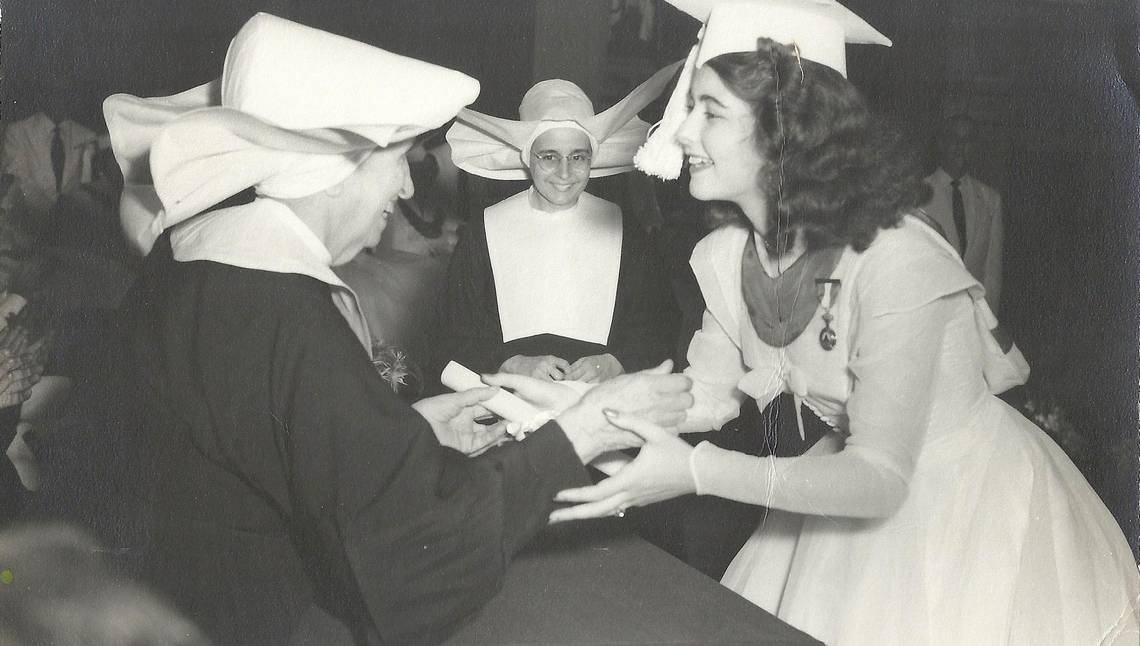 Zizi Careaga, president of the Association of Former Students of Colegio de la Inmaculada in Miami, studied there when Sister Hilda was principal. They stayed in close contact over the decades.

“She was a woman with a strong character who, being short and thin, looked at you when you did something wrong and you trembled. However, in all my life that I was by her side, I never heard her raise her voice,” said Careaga, 75. “She spoke softly, but in a powerful way, with sweetness and a great faith in God.”

Between 1960 and 1961, Sister Hilda served as principal of Colegio de Belén in Santiago de Cuba, a job that was suddenly halted during the anti-religious campaign by the rising communist government, which confiscated Catholic schools and other Church institutions. Religious intolerance forced into exile 200 nuns who made up the order.

“It was very painful, very tragic to leave what we had built with so much sacrifice,” Sister Hilda recalled in a 2014 interview with el Nuevo Herald. A choir of girls leaves the Colegio La Inmaculada, led by one of the Daughters of Charity. Milagros Caturla Cortesía / Archivo el Nuevo Herald

An exile fruitful in charity

Her first decade of exile was spent in Puerto Rico, where she was principal of the Colegio La Milagrosa, in the city of Ponce, and superior of the Casa de Estudios, a residence for students at the Catholic University of Ponce. In 1965, she was appointed supervisor of the Head Star educational centers in the Diocese of Ponce and provincial administrator of the Province of the Daughters of Charity in Puerto Rico.

After planting the roots of the Daughters of Charity in the Archdiocese of Miami, she returned to Puerto Rico in 1972, where she was elevated to Provincial of the order in the Caribbean, supervising mother superiors across the region. One of her greatest contributions as Provincial was founding the Mission of the Daughters of Charity in Haiti, according to Pérez-Puelles.

In 1981, Sister Hilda returned permanently to Miami and headed up the religious education program at Saint Vincent de Paul Parish. By then the apostolate of the Daughters of Charity had spread to the Saint John Bosco Church in Little Havana, where they cared for the elderly, children and Mariel refugees. But it was at the Ermita where they tended to the exile flock with their missionary Catholicism and kind smiles. At the shrine, they comforted and encouraged the broken; assisted in the administrative office; performed manual labor; and participated in the prayers and in the festive song of the liturgy.

Currently, three Daughters of Charity serve in the Ermita and five in the Casa San Vicente de Paul, where Sister Hilda was active, supervising the collection and shipment of containers with food, medicine and other supplies to the missions in Haiti and Cuba, until retiring in 2014, at the age of 93, for health reasons. In 2016, she celebrated 70 years of religious life. 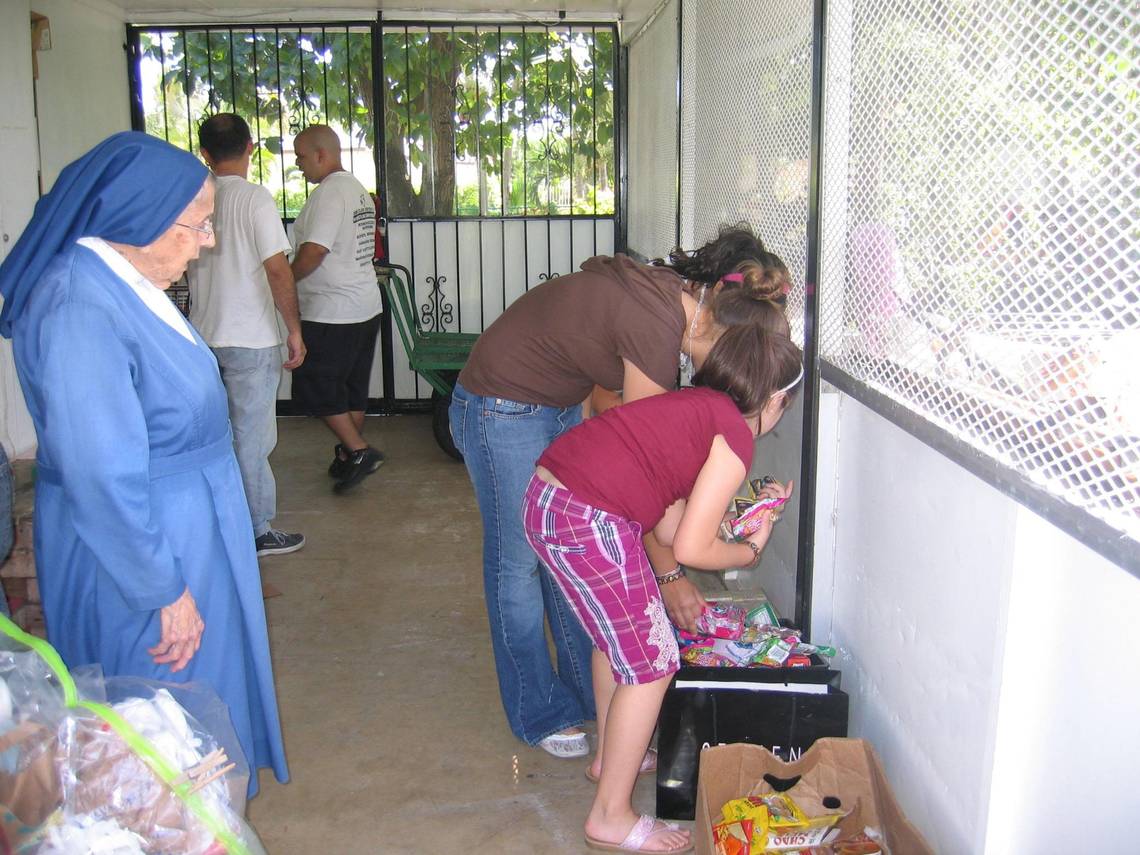 Sister Hilda Alonso continued to oversee the shipment of food, medicine and other aid to the Daughters of Charity missions in Cuba and Haiti until retiring in 2014 at the age of 93. Cortesía: Hijas de la Caridad de San Vicente de Paúl en Miami.

Rafael Peñalver, a lay leader and lawyer close to Father Román, said that the Daughters of Charity were instrumental in establishing the Cuban Catholic Church in South Florida.

Sister Hilda was “an academically and morally brilliant woman, whose dedication to her neighbor had no limits,” he said, recalling that the day his father, Dr. Rafael Peñalver, died of cancer in 1988, the family had not made funeral arrangements in advance.

“We were not prepared,” he said. Sister Hilda, a friend of his father, “had a special place reserved for her inside the chapel of Our Lady of Mercy Catholic Cemetery. She called me and said, ‘I want to give my space to your family so he can be buried there.’ ” Monsignor Agustín Román, spiritual father of the Cubans in exile, with the Daughters of Charity in the chapel of the Casa San Vicente de Paúl. In a letter to Sister Hilda Alonso (third from left), dated 1977, Roman wrote: ‘I congratulate you Sister because your community keeps the spirit of the founder, always looking for the poorest among the poor.’ Cortesía: Hijas de la Caridad de San Vicente de Paul en Miami. 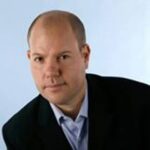 Daniel Shoer Roth is an award winning author, biographer, reporter, writer and editor at the Nuevo Herald [New Herald] where he served as reporter, news columnist, producer of the digital edition, and coordinator of the Acceso Miami. Today he is editor of Sociedad y Servicio Público for the Nuevo Herald and the Miami Herald.