Entering the Mysteries of Holy Week With Mother Seton

The rituals of Holy Week evolved over centuries to help us enter more deeply into the Paschal Mystery of Jesus Christ. Through her own experiences of suffering and joy, Saint Elizabeth Ann Seton’s life was a mirror of Christ’s Passion and Resurrection.

During Holy Week we relive the last days in the earthly life of Jesus Christ. We accompany Jesus during his suffering, death and resurrection, moving from intense sorrow to great joy, with the hope of deepening his presence in our lives, and our trust in his promise of eternal life.

St. Elizabeth Ann Seton’s own faith journey is a beautiful reminder of how entering into the mysteries of Holy Week can sanctify our lives.

Elizabeth first experienced the rituals of Holy Week while growing up in the Episcopal Church. Her childhood family – the Bayleys – and her husband’s family – the Setons – would have heard the same Gospel readings Catholics do on Palm Sunday. They would have read the “Entrance into Jerusalem” Gospel at the beginning of services and the Passion Gospel at the end.

They would not, however, have received palms on Palm Sunday – though neither would any Catholics at that time, as this practice originated later in France. But since Elizabeth’s grandfather was a priest of the Church of England, the Bayleys may have known of the “Branch Sunday” customs, using various forms of branches to approximate the palm procession outside the church.

Elizabeth and her family would likely have sung the Palm Sunday hymn that is familiar to Catholics:

“All glory, laud and honor
To Thee, Redeemer King
To whom the lips of children
Made sweet hosannas ring.”

And later in Holy Week, Elizabeth would have attended a Tenebrae service, in which a series of psalms and responses are prayed as a set of candles is extinguished, showing the darkness of Christ’s death, leaving only one candle lit to signify the hope of Jesus’s resurrection.

The experience of these rituals would have prepared Elizabeth for the darkness that would descend upon her after she converted, when she and her children were rejected by family and friends.

An ancient custom for those entering religious orders was to pray these words from Psalm 42, “My tears have been my food day and night,” to stress that entering into religious life is a struggle as you leave your old life behind. It is noteworthy that Elizabeth was received into the Church on Ash Wednesday, March 14, 1805. She entered the Church hearing the words “Remember that you are dust and to dust you will return,” and began an arduous “novitiate” as a new lay Catholic.

The harsh reaction to Elizabeth’s conversion from her Protestant relatives and friends made life difficult for the new widow. Perhaps most serious, they made her financial strains even greater. According to the Catholic Encyclopedia of 1913, “numerous relatives would have provided amply for her and her children had not this barrier been raised.” And she also encountered religious bigotry at the public level. “In January 1806, Cecilia Seton, Elizabeth’s young sister-in-law, became very ill and begged to see the ostracized convert, telling her of her desire to become a Catholic. When Cecilia’s decision was known, threats were made to have Mrs. Seton expelled from the state by the [New York] Legislature.”

But, like the last candle of the Tenebrae service, Christ always leaves the light of Easter hope shining for us. Later, when Cecilia recovered, she “fled to Elizabeth for refuge and was received into the Church.”

At the end of that first long year as a Catholic, Elizabeth would have fully understood the Palm Sunday words of the priest:

“Dear friends in Christ, for five weeks of Lent we have been preparing, by works of charity and self-sacrifice, for the celebration of our Lord’s paschal mystery. … United with him in his suffering on the cross, may we share his resurrection and new life.”

In 1819, towards the end of Mother Seton’s life, the traditional Catholic rituals of Holy Week would serve as a vital link to her son William Seton, when he was far away, serving in the Navy. St. Elizabeth Ann was sick, and worries about the state of William’s soul only added to her burdens.

While on board the frigate U.S.S. Macedonian, as it was moored in Valparaiso Bay, Chile, William wrote a letter to his mother: “I have had an opportunity to witness some of the extraordinary customs of this country in Holy Week,” he wrote. “The day before yesterday being Maundy Thursday, all the Catholic ships in harbor wore their colors half-mast and their yards cock-bill, or in a zig zag, careless position, expressive of mourning.”

At the end of his letter, after noting with delight that all the ships had fired cannon salutes to Christ on Holy Saturday, William remarked on how Holy Week connected him to his family. “Tomorrow will be Easter. Oh, my beloved mother, what scenes does this happy day bring to mind! But, alas, they are past. Heaven grant they may return; we can only hope,” he wrote.

On this occasion, William was emulating his mother – learning to let the Church’s liturgical year do for him what it did for the South American sailors. Holy Week had immersed him in the mysteries of the life of Jesus Christ, even in the midst of naval service.

As it did for Mother Seton, the Holy Week liturgy bestows a sacred rhythm to our lives in this world, connecting us to one another, and through one another, to Christ — for eternity. 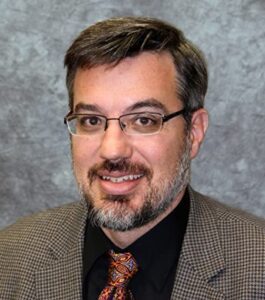 TOM HOOPES, author most recently of The Rosary of Saint John Paul II, is writer in residence at Benedictine College in Kansas, where he teaches. A former reporter in the Washington, D.C., area, he served as press secretary for the U.S. House Ways & Means Committee Chairman and spent 10 years as editor of the National Catholic Register newspaper and Faith & Family magazine. His work frequently appears in the Register, Aleteia, and Catholic Digest. He lives in Atchison, Kansas, with his wife, April, and has nine children.

This reflection was originally published in April, 2019. To read all of our Seton Reflections, click here.

Tags:
← "A rain of miraculous medals pours over Ukraine" - Aleteia.org Live and Die as Jesus Christ Did →