On the eve of the feast of Saint Francis of Assisi, 4 October 2020, Pope Francis published his third encyclical letter: ‘Fratelli tutti‘.

As the person in charge within an international congregation that fulfils a clear mission in the world, more specifically in the world of education and health care, on the basis of its own charism, Bro. René Stockman offers here a short summary of each chapter followed by a more personal reflection. 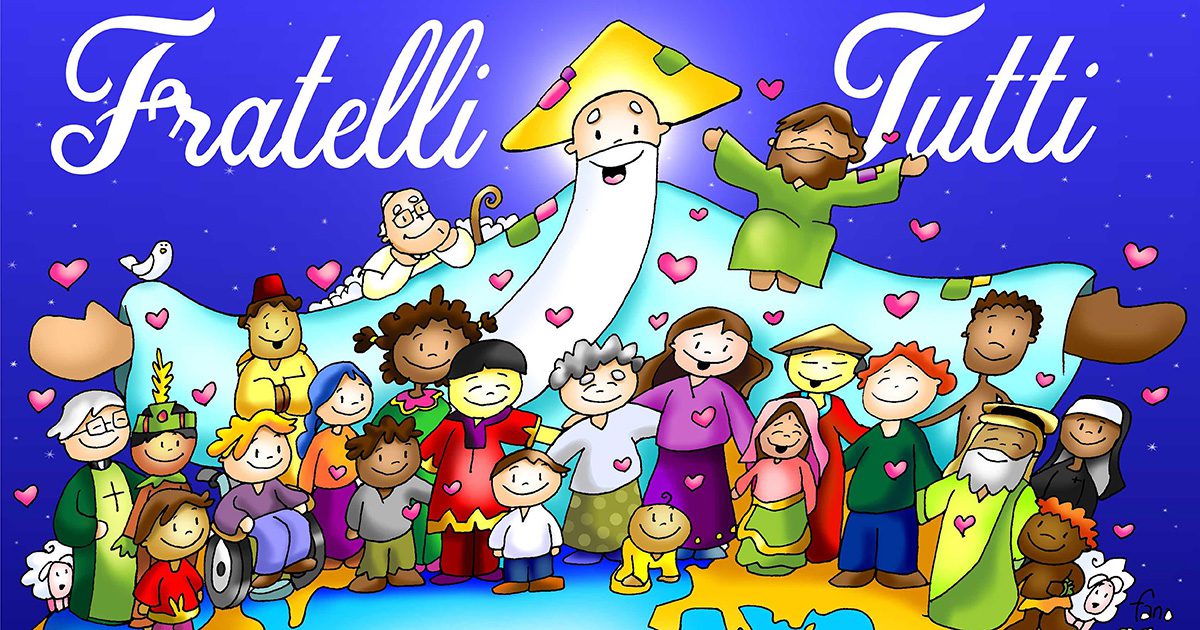 Chapter 2: A stranger on the road

In a typical Ignatian style, Pope Francis analyses the parable of the Good Samaritan as a contemplative orientation in order to develop a path of true social love and solidarity. Referencing the question that God asked Cain after he killed his brother Abel: “Where is your brother?” (Gen 4:9) with the appalling answer: “Am I my brother’s keeper?” refers to the heart of the problem: one can withdraw from caring for the other, for one’s neighbour in a tragic way. Based on this realization, Jewish tradition has elevated love for one’s neighbour as a commandment. However, it was still too limited to one’s own kinsmen. It is this limitation that Jesus radically breaks with the parable of the Good Samaritan and makes the commandment of love a universal commandment that excludes no one. The memory of having been foreigners themselves helped the Jews to develop a specific concern for foreigners.

The parable describes a sharp contrast between those who do things by the book and continue on their way undisturbed and the Samaritan who is moved by the stranger on the wayside. The question Jesus asks next with whom one wants to identify is therefore a confrontational one. Referring to today, we must conclude that we have made great progress in so many areas, but often remain illiterate when it comes to the concrete care of our neighbours in need. Many people’s first concern often remains not to want to be disturbed by the problems of others. However, the only path that remains open to us is precisely the one taken by the Samaritan: opening up to our vulnerable neighbours and preventing ourselves from evolving into a society in which the weak are excluded. In fact, indifference to the suffering of one’s neighbour goes against our human nature, because we were created as each other’s neighbours and are called upon to become each other’s neighbours more and more. Every day we are confronted with the same story and the question is which choice we make: the priest’s and the Levite’s, who, indifferent to the suffering of the other, continue on their way, or the Samaritan’s, who allows himself to be moved by the suffering of the other. These are the two groups of people we see today. The story of the Good Samaritan therefore remains a very topical one.

Actually, the story starts with robbers attacking the man. This, too, remains a regrettable reality to see how much aggression there is today and in which people become victims. How do we deal with this, what do we do to prevent it, and what do we do to help the victims of this aggression?

It is very striking that Jesus uses the very example of a priest and a Levite, two religious people who are assumed to observe the commandments to the letter. He points out the danger of engaging only with worship within the Church and neglecting the concrete concern for our neighbours at the same time. Believing in God and worshipping him in church does not necessarily mean living according to his will. The words of Saint John Chrysostom are striking, indicating that we would rather honour a nicely dressed image of Jesus than a naked Jesus on the cross.

Those who close their eyes, like the priest and the Levite, to the suffering of those who fell into the hands of robbers become accomplices to the crime that was committed! They continue the crime so to speak. Something to think seriously about.

Sometimes we hear that the safety and care of our neighbours in need is the responsibility of the government, of society as such. This is true, but that should not stop us from taking action ourselves when we come across a suffering person. Shirking our responsibility is always wrong. On the contrary, it is important to involve others, as the Samaritan did, and encourage them to help us care for each other. Because together we can always do more than on our own.

What is also striking is that not a word of thanks is uttered in the parable. The Samaritan leaves without waiting for a reply from the person he helped. The dedication in the service itself gives him the greatest satisfaction, that is enough for him, because he was only doing his duty.

The story of the Good Samaritan overturns all the restrictions that had crept into the commandment of love. All cultural and historical boundaries are lifted from it. Everyone should feel called to become the other person’s neighbour, without limitations. Of course, it was powerful that Jesus took a Samaritan as an example, someone who was considered impure by the Jews and should therefore be avoided. So, bridges are being built on both sides!

A final consideration is that this parable should always be read in conjunction with the judgment criteria in which Jesus declares that everything that is done for the poorest and weakest is done for him. Jesus himself is present in every brother and sister who is abandoned or excluded.

The Church, too, has taken a while to condemn all forms of slavery and certain forms of violence, but with the current development of theology in this field, we no longer have any excuse. It is therefore our duty to condemn in the strongest possible terms any form of self-enclosed nationalism and xenophobia.

The parable of the Good Samaritan is a true icon for our Congregation as well, in which our charism of charity is vividly present. It is not without reason that this scene was chosen for the stained-glass window placed in the National Basilica of Koekelberg in Brussels on the occasion of the 150th anniversary of the Congregation. It is also featured on the memorial stone that was placed in the chapel of the brothers in Eindhoven, on a stained-glass window in our convent rest home in Zelzate, and on the tabernacle of our international novitiate in Nairobi. But at the same time, we are constantly called upon to repel and transcend all limits of our love for our neighbour. And this is about the concrete love we must give to our neighbours in need on our path, the way in which we as a community are open to the poor in our neighbourhood, the way in which we continue to give real priority to caring for the least in our apostolate and let our choices be determined by it.

Tags: Fratelli Tutti
← Vincentian Martyrs of the Spanish Civil War: Meaning For Our Own Era When You Turn the Miraculous Medal Over… →