The Saint of Wuhan in Poland

The website “Mission Universelle,” of the National Service for the Universal Mission of the Church of the French Episcopal Conference, published an article about Saint John Gabriel Perboyre on April 27. After receiving permission to reproduce it, our site shares this article with you. Enjoy reading it:

In the Basilica of the Assumption of the Most Blessed Virgin Mary and Saint Nicholas in Bolesławiec in Poland, an extraordinary discovery has been made: a relic of Saint John Gabriel Perboyre (1802 -1840), a French missionary of the Congregation of the Mission, sent to China in 1835 and martyred in Wuhan. 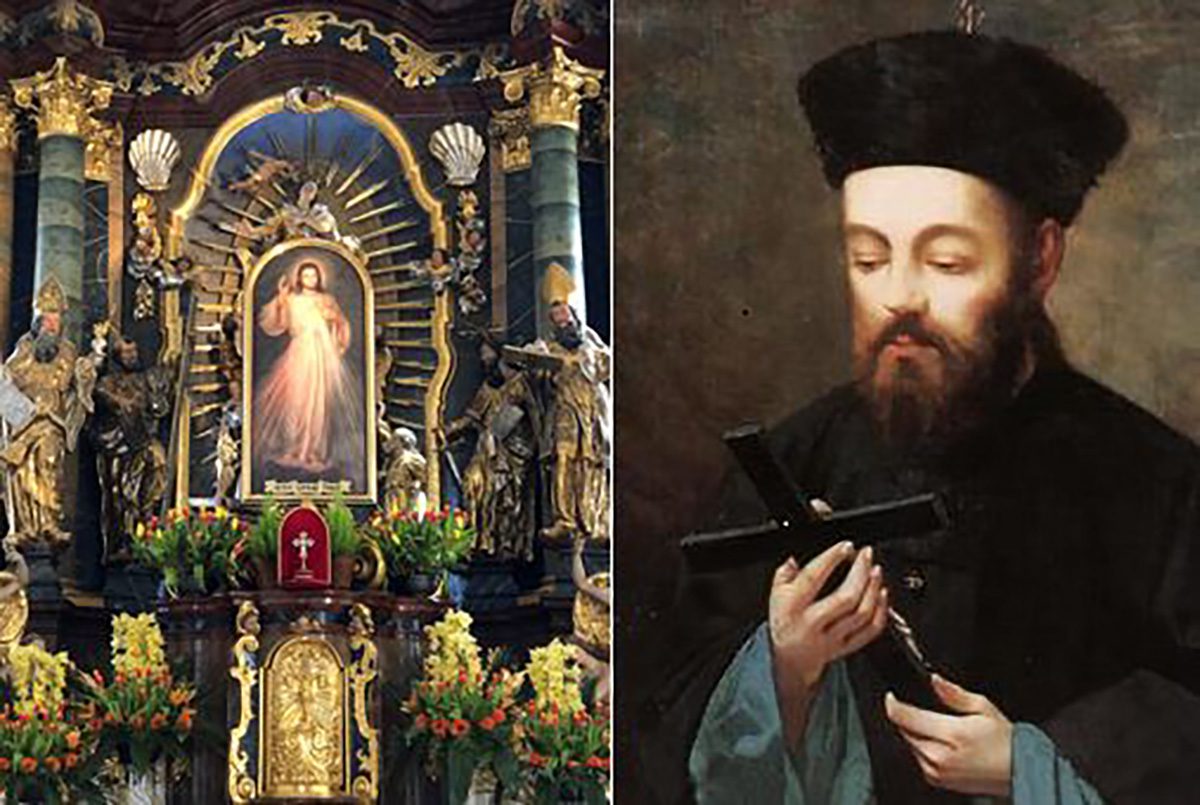 The altar in the Bolesławiec basilica with the reliquary and the portrait of Father Perboyre.

“In October 2019, a few days before All Saints Day, I opened the safe containing the relics. In fact, we had decided to display them during the feast day celebration. I found a cross-shaped reliquary that I could not identify,” says the Damian Konieczny, the vicar of the basilica.

“This German reliquary from 1917, made in Cologne, had a plaque with an illegible inscription. I took a photo to enlarge it and was able to read: ‘Perboyre.’ So I began to investigate this member of the Congregation of the Mission (Lazarists) who died in Wuhan (China), a city whose name meant absolutely nothing to me at the time.”

“At the beginning of the confinement, I remembered that Fr. Perboyre was martyred in China. As I continued my investigation, I learned that he had been tied to a wooden cross and killed by strangulation in Wuhan in 1840. It was a surprising discovery, because at this time, the media throughout the world is often talking about Wuhan!”

“We decided, with the permission of Father Andrzej Jarosiewicz, the parish priest, to display this relic and to pray every day for the intercession of Fr. Jean-Gabriel Perboyre. We entrust to him all the patients with coronavirus, a disease that has, as one of its symptoms, respiratory distress. If the pandemic subsides, on September 11, the day that the church commemorates his life and death, we will organize a solemn prayer service in the basilica, to thank God for this holy and saintly patron.”

“We have placed the reliquary on the main altar of the basilica. The relic can now be seen and venerated there,” continues Father Damien. “Every night at 8:30 pm, we pray before the relic. This prayer is transmitted to the people through the parish Facebook page. Many people participate. We receive prayer intentions from all over Poland and people from other countries, such as Italy, Spain, Switzerland and even Australia, follow us”, concludes Fr. Damien.

Jean Gabriel Perboyre was born on January 6, 1802 on a farm in Puech, in the Montgesty commune, in Lot. Jean, the eldest of eight brothers, arrived at the seminary to accompany his younger brother for a few months. While his brother acclimatized himself to seminary life, he himself discovered that he was called to be a priest and, like his brother Luis, he entered the Congregation of the Mission, to which one of his uncles already belonged. Ordained a priest in 1826, he was first responsible for the formation of the novices. The desire to serve on the foreign missions had not abandoned him and returned even more powerfully after the death of his brother Luis, who was travelling China where he had been missioned. Jean Gabriel was finally sent to China and, in 1836, he arrived at the first of the two missions where he would stay. “I do not know what awaits me on the road: without a doubt the cross, which is the daily bread of the missionary. Could we expect anything different as we preach about a God who has been crucified?” … words that he wrote in one of his letters.

He was arrested in September 1839, after being denounced by a catechumen for the sum of 30 taels; he went from trial to trial, from humiliation to humiliation, from torture to conviction. He was executed in the Wuhan district on September 11, 1840, tied on a cross and strangled.

He was canonized in 1996 by Pope John Paul II. His remains rest in Paris, in the chapel of the motherhouse of the Lazarists on rue du Sèvres.

Is there a connection between Bolesławiec, Wuhan and Cahors? That relationship is due to the work of Jean Gabriel Perboyre. Christians in these three cities invoke his intercession during this time of pandemic. They are united by prayer, even if they are not aware of this reality. This is a beautiful accomplishment of the mission that was undertaken by Jean Gabriel, who wanted all people to come to a knowledge of Christ. On September 11, the feast of the holy martyr, this unity in prayer will give rise, perhaps, to a true communion of heart. God will provide, if He so desires.

Prayer composed by Fr. Andrzek Jarosiewicz, pastor at the Basilica in Bolesławiec

Saint Jean Gabriel Perboyre, priest and martyr,
kindly answer the prayers of the Church, which you served all your life.
We ask you for the grace to be preserved from the coronavirus pandemic that is ravaging humanity
and that has its origin in the place sanctified by your mission and your death as a martyr.
For the love of the Church, your family, we ask for healing for all the sick,
strength and patience for health care workers,
the light of the Holy Spirit for those who govern
and are attempting to bring a halt to the pandemic,
and peace of heart to those who despair.
Obtain, for those who have left this world as a result of the pandemic,
the grace of endless happiness and comfort to their families.
May the offering of your martyrdom by strangulation,
obtain from God the grace to free us from the pandemic
that has sown death, fear and uncertainty in today’s world.
In communion with you and with the Church,
which you loved to the end,
and following the example of the Savior,
we invoke the intercession of the Mother of the Church ascended into heaven,
and we say:
Under your protection we take refuge,
Holy Mother of God;
do not discard the petitions
that we direct to you
in this our time of need,
but deliver us from all danger,
O glorious and blessed Virgin!

read the article on the website of « Mission Universelle »

Tags: coronavirus
← Defender, One in Three, of the Helpless Vincent’s Secret Sauce for Change →