The United Nations in New York is bustling this month with its annual General Assembly, also known as the “GA.”  The General Assembly is a time in which all 193 member states meet to address prominent global issues.  This year’s Assembly is unique in that it also features five summits.  While presidents and prime ministers will contribute 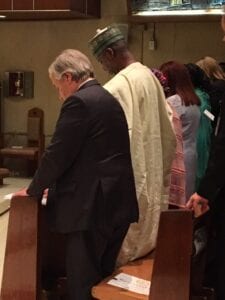 speeches to a debate, which is part of the GA, UN Secretary General Antonio Guterres is deeply interested in hearing about action, particularly related to climate change.

A prayer service to mark the opening of the 74th General Assembly and call a blessing upon it was held on Monday at the Church of the Holy Family in Manhattan.

The President of this year’s General Assembly is H.E. Prof. Tijjani Muhammad-Bande, Permanent Representative of Nigeria to the United Nations.

Some of the events during the General Assembly can be seen on UN Web TV. The link is: http://webtv.un.org/

CLIMATE SUMMIT:   The Climate Summit takes place on Monday, September 23, although it will be preceded by a youth climate Summit this Saturday.  Not only member states, but representatives of many other sectors will address six particular areas, including resilience and adaptation to climate impacts, management of forests and oceans, global transition to renewable energy, sustainable agriculture, sustainable infrastructures and cities, and aligning public and private finance with a net zero economy.

The Secretary General is keen to learn what countries are doing to meet their obligations under the Paris Climate Agreement, cut emissions by 2020, and achieve net zero emissions by mid-century.

Teen climate advocate Greta Thunberg, of Sweden, will lead a climate action in New York’s Foley Square tomorrow, September 20.   In addition to speaking at the Summit, she will visit a series of pollution pods displayed in front of the UN, in which the air quality of six cities will be portrayed.

VENEZUELA: You may wonder, “What is the UN doing about the needs of people in Venezuela?”  On August 14, the UN Office for the Coordination of Humanitarian Affairs (OCHA) announced a new Venezuela Humanitarian Response Plan. The Plan appeals for $223 million to provide humanitarian assistance to 2.6 million Venezuelan children, women and men until the end of the year.

UNIVERSAL HEALTH COVERAGE SUMMIT:  Sustainable Development Goal 3 focuses upon healthy lives and well-being for all.  Alongside the Climate Summit, next Monday, will take place a first-ever Summit on Universal Health Coverage.   The theme is “Moving Together to Build a Healthier World.”   The Summit will put the spotlight on lack of access to health care for so many and the financial impact upon those who can access it.

SUSTAINABLE DEVELOPMENT GOAL (SDG) SUMMIT: In 2015, member states agreed to 17 Sustainable Development Goals which would promote both people and planet.  They include aims such as ending poverty and hunger, reducing inequalities, ensuring quality education for all, peace, climate action, protecting Earth’s land and water and more. Progress towards achieving the goals will be discussed during an SDG Summit scheduled for Tuesday and Wednesday, September 24 and 25.

FINANCE FOR DEVELOPMENT: The target date for meeting the Sustainable Development Goals is 2030.  It will take trillions to be successful in reaching the goals by then.  The Finance for Development Summit, scheduled for Thursday, September 26, will promote discussion and partnerships among government, public, and private sectors to accelerate means of finding funds to achieve the goals.

SMALL ISLAND STATES:It is no secret that Small Island Developing States (SIDS) bear a significant brunt of climate-related phenomenon, such as sea-level rise, and can be vulnerable to economic fluctuations.  The final summit planned during the General Assembly is the Mid-Term Review of the SAMOA (Small Island Developing States Accelerated Modalities of Action) Pathway.  The Review takes place on Saturday, September 27.