Frederic Ozanam and the Cathedral of Notre-Dame

Frederic Ozanam’s Christian life and the history of the Cathedral of Notre Dame in Paris have run on parallel lines at various moments of time. Thus, on August 22, 1997, for example, during the celebration of World Youth Day, Pope Saint John Paul II beatified Frederic Ozanam, co-founder of the Society of St. Vincent de Paul (SSVP) and this celebration took place at the Cathedral of Notre Dame. A plaque that was placed on one of the central columns, recalls the occasion.

The most important event in Ozanam’s life that is related to the Cathedral occurred in 1835. That year, after much prodding and even submitting a letter signed by 200 students, Frederic Ozanam persuaded the Archbishop of Paris, Monsignor de Quélen, to authorize the organization of the so-called “Lenten Conferences” which took place in the cathedral. For the first time, the greatest temple of the city opened its doors so that the youth could know the fundamental truths of Christianity, and to be attracted to the light of the Faith. The preacher was Father Henri Lacordaire, friend of Frederic. Those Conferences were seen as “a treatise on dogma and morality, organized to confront the philosophy and errors of the nineteenth century.” After each Conference, some six thousand people received communion. Today, more than 180 years later, the Lenten Conferences are still organized every year. 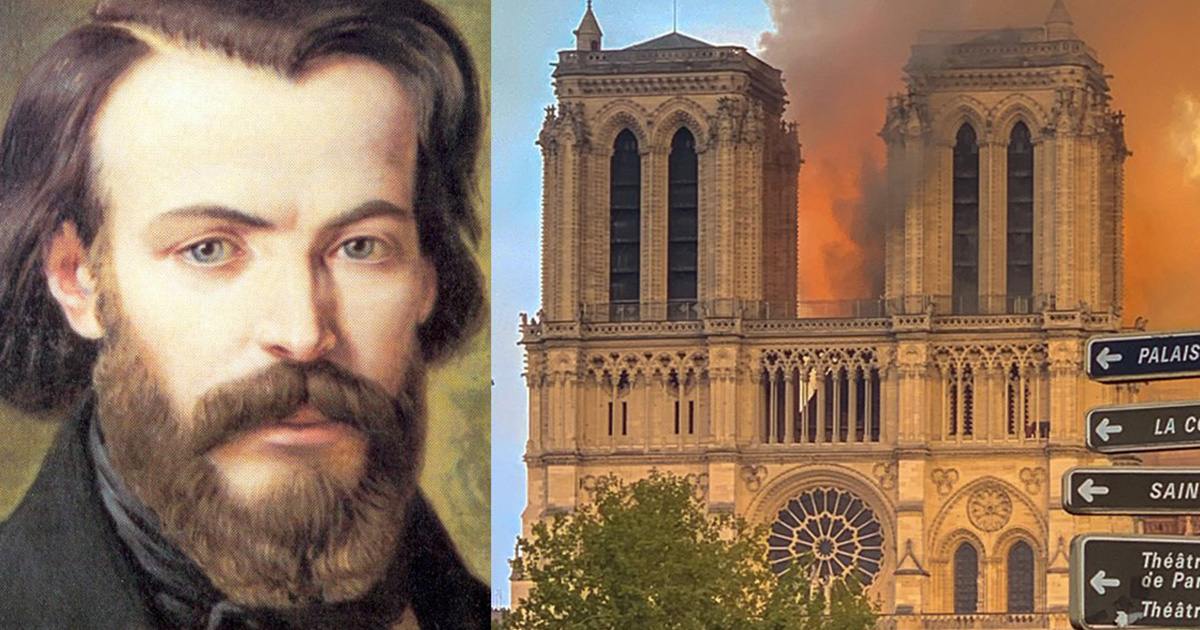 If we go deeper into the history of Ozanam, we find interesting details related to the Cathedral. Frederic attended the Paschal liturgy in it. Henri Perreyve, his personal friend, tells us that one day, after the general communion, Ozanam quickly said goodbye to the acquaintances, with the excuse that he had to prepare classes (he was a professor at the Sorbonne); in fact, says Perreyve, “Frederic was going to buy bread to take it to his poor, giving thanks to God in this way for the Easter celebrations.”

In 1842, Ozanam helps to organize the preparatory retreats for Easter in the Cathedral, coordinated by Father de Ravignan. One day he was filled with joy when he saw the results of the exercises: in line to receive communion in the Cathedral there were nobles and rich, covered with ornaments, next to the poor, in their clothes of workers, soldiers, students of the normal and polytechnic schools, children and, above all, university students in large numbers. The communion lasted an hour. All left the Cathedral touched, but for Ozanam the moment had not yet finished: “he went to the house of the poor of his conference, to give back, in some way, the visit that Our Lord had made in the Eucharist.”

On April 27, 1913, on the occasion of the Mass of the centenary of the birth of Frederic Ozanam, Pope Pius X sent Cardinal Vincent Vanuttelli, to communicate a message to the people who gathered in the Cathedral. In that message we find the following words:  “by his writings and by his actions, he [Ozanam] placed faith in the light and positioned himself among the most extraordinary champions of Christian science.”

One hundred years later, on April 21, 2013, Divine Providence provided me with an opportunity to witness the gleaming rays of Ozanam in the  Cathedral of Notre-Dame.  A solemn mass was celebrated there to commemorate the 200th birthday of Frederic Ozanam. I remember it as if it were today. The building was filled with members of the Society of St. Vincent de Paul, (men and women from many different  countries, praying for their most eminent founder). It was the highlight of a week of celebrations for the bicentennial. Through the work of God and Providence, the Cathedral was chosen once again to be the place of homage to one of the greatest apologists (defenders of the Catholic faith) that the last three centuries knew.

Unfortunately, on April 15, 2019, a fire consumed part of the physical structure of the Notre-Dame Cathedral. In total, 856 years of architectural history have been lost, at least partially. However, throughout history the example of faith and action of Christians, like Frederic Ozanam, has been passed  on to others … and the cathedral In Paris has been seen as a bulwark that has preserved traditions and also a source of inspiration for countless men and women who desire to build up humanity thirsting for peace, justice, love and … thirsting for God himself.

May Blessed Frederic Ozanam intercede for all. May we be part of the flame that does not destroy, but burns, unites and comforts all hearts. Amen.

By Thiago Tibúrcio
President of the SSVP Metropolitan Council of Brasilia.