VINCENTIANA is a Catholic music festival organized by the seminarians of the Congregation of the Mission of St. Vincent de Paul in Krakow. The first competition took place in 1984 and its objective was to select the best seminarian band! A year later, the seminarians invited youth groups from parishes administered by the Congregation to enter the competition. The response was astonishing! Since then, each year more and more young people from all over the country have participated. Some years later, due to the growing number of participants, VINCENTIANA moved the competition to a larger place located in the Educational Centre “Radosna Nowina 2000” in Piekary near Krakow. Each year about 500 young people from throughout the country gather together in order to participate in this event! The spiritual inspiration for the festival is St. Vincent de Paul, the Father of the Poor, the Patron of all charitable works, the founder of the International Association of Charity, the Congregation of the Mission and the Daughters of Charity. VINCENTIANA could almost be viewed as a religious retreat. The focal point of each day is the Eucharist. The official prayer of VINCENTIANA, prayer in the presence of the Blessed Sacrament, the celebration of the sacrament of reconciliation, the presence of a spiritual director, the space for vocational discernment – all of this is intended to give a spiritual meaning to the beginning of summer but also to bring us closer to God!

Okay, but is this VINCENTIANA? It is an event that combines prayer, music and workshops. Festival. During VINCENTIANA there is an artistic competition in which young people present two songs on religious themes which are judged by a professional jury. One of them must present an aspect of the spirituality of St. Vincent de Paul. Each of the performances is evaluated by music industry specialists. In recent years, the jury has been composed of such artists as Jakub Blycharz, Jan Budziaszek and Michał Guzek.

What about the workshops …  in addition to awarding the best performers (bands and soloists) with vouchers of up to PLN 5,000 (to be used in a music shop), all the participant have an opportunity to develop their talents. The music workshops are conducted by outstanding musicians and artists and provide the participants with an opportunity to gain further insight into the development of their vocal and musical talents. There are also workshops in dance and theater.

The seminarian band LAZARYŚCI also performs on our stage. Last year it celebrated its 50th anniversary.

It is worth noting that every year we invite a special guest who shares his/her witness story of faith and life with Jesus. Those guests have included: Darek Malejonek, Jasiek Mela and Fr. Leon Knabit.

What do the VINCENTIANA participants do in their free time? There is not much free time, but when there is, the participants utilize the exceptional facilities, that is, the cafes (where the young men and women build community and establish bonds of friendship) and the bookstores.  We allocate the collected funds that are collected during this event to a specific charitable purpose.

Each edition of VINCENTIANA has its own slogan – taken from the Bible. Last year our motto was Jesus’ words from the Gospel of St. Luke (10,3): ”Go! I am sending you” … therefore, we focused on the theme of mission and our mission in everyday life.

Where can one find more information about VINCENTIANA? 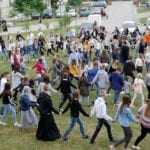 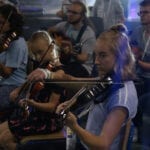