This article was written by NICHOLAS ELBERS and was published by The B.C. Catholic

The oft-told story of the child who throws starfish back into the ocean because “it matters to that one” is the kind of organic growth that Bob Buckham hopes to see when ministering to the homeless in Vancouver’s Downtown Eastside.

The Archdiocese of Vancouver’s coordinator of service and justice, along with assistant coordinator Angela Veters, spoke at an evening of networking sponsored by the archdiocese to help connect individuals and organizations involved in charitable activity among Vancouver’s neediest populations. 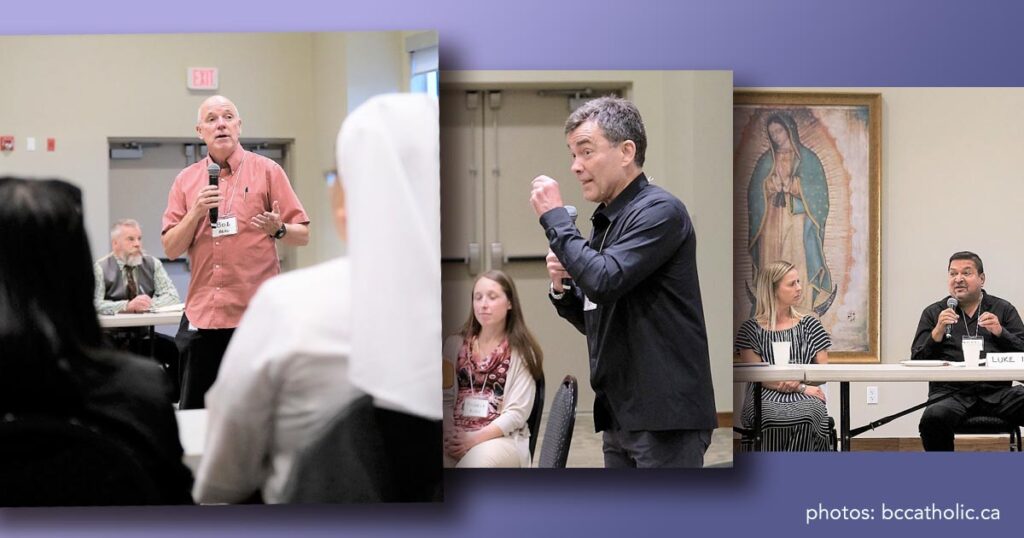 “How can we assist you?” Buckham asked delegates of the dozen organizations who attended the workshop at the John Paul II Pastoral Centre. “And how can you assist each other?”

The meeting was designed to help the organizations network so they can share information to respond to problems blocking their success.

Also attending were representatives of the Catholic Women’s League, Knights of Columbus, and St. Vincent de Paul Society, and two First Nations consultants, Kevin Barlowd Clint Barton, whose input Buckham said was important because of the large number of Aboriginal people among the homeless due to generational trauma and other factors.

Highlighting problems with the current healing infrastructure, Barlow noted that despite the impact that drugs and alcohol have on the Aboriginal community there are still no addiction centres led by Indigenous people.

Solving this problem would be a big step forward, Barlow said, because culture needs to be at the core of any solution for the housing crisis.

Relying on others for healing leads to two problems, he said. Because of their experiences with Christians who administered residential schools, Aboriginal people may be apprehensive or hostile to Christian organizations. Working with non-Aboriginal organizations also cuts off Indigenous people from their culture. Nature is at the core of Aboriginal culture and needs to be integrated into healing programs, he said.

Common challenges faced by organizations that minister to victims of prostitution and sex trafficking include reaching women when COVID has driven most sex work online, making it nearly impossible for street ministries to reach women on a nightly basis.

Catholic Street Missionaries founder Mildred Moy said volunteers now text women they can’t meet in person but getting access to their phone numbers can be a struggle.

Meeting participants were also concerned about the growing trend among doctors to prescribe opiates to people recovering from drug addiction. “How can we run an abstinence-based program” if the doctors see nothing wrong with giving the people in care prescription opiates, said Luke 15 Director Nigel Vincent. “They can’t do abstinence-based programs if they are essentially high [on prescription opiates].”

A problem for nearly every organization is a lack of volunteers. Even before the pandemic, organizations were finding it difficult to attract young people to replace their aging volunteer base. COVID exacerbated things by disconnecting organizations from their older volunteers.

Many groups say their volunteers are unable to keep up with the technological demands of COVID-era communication like Zoom and simply fell away from volunteer work. Representatives of the Catholic Women’s League and the Knights of Columbus said they hope their substantial membership can help organizations in need of volunteers.

Buckham told attendees the archdiocese is working on a program to provide potential helpers for any organization needing assistance. The list was inspired by a similar initiative created at St. Joseph the Worker Parish in Richmond by parishioner Belinda Boyd. That program has attracted 125 volunteers who have agreed to be contacted by phone or email when the parish needs help.

Attendees also heard from Dr. Julian Somers, distinguished professor of health sciences at Simon Fraser University, who urges “Housing First” solutions to homelessness that focus on providing “normal housing” as the first intervention to get the homeless back on their feet.

These programs do not replace traditional counselling, recovery, and work programs but focus on building self-worth as a means to recovery and community integration.

Somers said B.C. politicians have shown significant resistance to housing-first initiatives because they are unwilling to admit a course correction is needed. Still, he believes the research is clear: if you give people a community and a place to live in which they can be proud, they have a good chance of recovery.

Jenny Konkin, president and co-founder of Whole Way House, described how her organization’s single-room, low-income apartment complex in Vancouver offers community-focused events and services that help residents feel connected with each other. Since implementing the program, the organization has seen a significant reduction in 911 calls and property damage to the apartments.

Konkin said the organization’s community-first initiatives have been especially helpful for the elderly, whose numbers are growing among the homeless. She said seniors who are connected to each other can take on the roles of counsellors and aides for their fellow residents, helping each other get to and from appointments, doing health checks, and performing any number of other tasks for which paid staff used to be responsible.

Many of the community programs are geared toward building personal agency – the sense that individuals have the ability to make decisions and take actions on their own. For example, residents can access cooking classes and life-skill classes as well as benefit from regular meals and social activities.

Konkin said offering residents a well-structured activities schedule helps them make lasting connections with one another.

She said one resident had not known the name of her neighbour until staff initiated the community-first program. Now she is surrounded by people she knows and who know her.

The Archdiocese of Vancouver has begun considering the possibility that it might build and operate its own affordable-housing project in Vancouver’s Downtown Eastside.

Sean Rodriguez, the archdiocese’s director of construction and property renewal, told an archdiocese-sponsored networking evening among agencies serving the needy that discussion surrounding such a development is still in the “dreaming” phase, but that such a project could serve as a model for larger infrastructure in the future.

The housing idea imagines an 11-storey building with 105 affordable units, as well as retail space and other amenities.

Rodriguez stressed that it will be years before the plan might move forward but that the project illustrates how the archdiocese is looking to maximize the usefulness of its existing assets and properties in service of the Church’s mission of charity.

Rodriguez said he believes that the archdiocese must do more than simply update its current infrastructure.

“If we have a school and we simply rebuild the exact same school we have we missed the boat,” Rodriguez told The B.C. Catholic.