Germán Sánchez: “Those who count for no one are the ones who teach us how to live.”

Germán, Delmy and their two children are a family that has been carrying out their missionary project in Bolivia since 2003. The couple met before, in Honduras, when they were both young members of MISEVI. This is their story of mission and help to those “who are left over.” 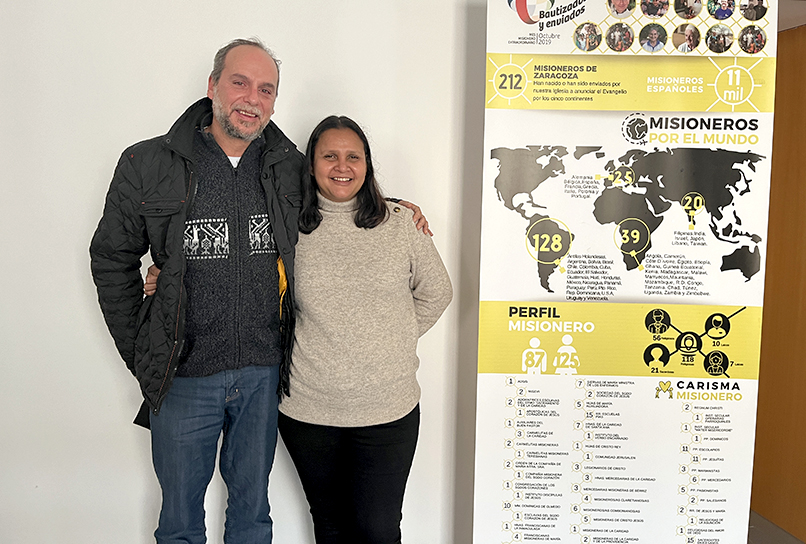 Germán and Delmy on a recent visit to the Missions Delegation of Zaragoza (Spain).

Germán, what led you to have this missionary spirit, to leave everything to go to a mission country?

In June 1994, when I was 21, I went on mission to Honduras, to a parish of the Vincentian Fathers. I went for three months but with the idea of staying. We used to be a little foolish (laughs). This was possible thanks to the Vincentian Marian Youth, which is still a youth movement of the St. Vincent de Paul Family. In Spain, the youth movement was quite strong, not self-absorbed, and because of its charism it had many works of service both in Spain and abroad. Through the support of the Congregation of the Mission and the Daughters of Charity, it was possible to have a missionary experience for young people in Argentina, Mexico, Honduras, Bolivia, Cuba and then in Africa, in Santo Domingo, Cuba, in Guinea.

At that time there were young people who, in groups of 20, went to have a missionary experience accompanied by a father/advisor.

I met Delmy in the parish where we carried out the mission. She was from MISEVI as well. Years later, she went on a year’s mission to El Salvador and when she returned we began a courtship with the proposal that we could live a marriage in the mission. We got married in 2000, up to now.

We offered the arras at the offertory. We said: “for the mission and may it be what God wants.”

What were your feelings when you arrived in the mission country?

I had no idea what I was going to find. I do remember that everything struck me because everything was new to me. The social conditions of the people impressed me a lot and also how they managed to live. The relative ease with which they lived according to situations that here would be huge difficulties. I was very surprised by the ease with which people lived adversity. Not getting used to it, because nobody gets used to bad things, but that ease to realities that here would have seemed like huge problems.

What were you doing in Honduras when you arrived?

There was a values training campaign, a children’s campaign, which was carried out in primary schools. We then started a program in some very problematic neighborhoods, where we inserted ourselves and started preventive programs with children at risk, because drugs were a big problem. They were neighborhoods where no one was coming in. that program is still running to this day.

Was your life ever in danger?

No. Once you’re in, there’s no problem. They take care of you. Now that we haven’t been there for a long time, it would be dangerous because you have no one to accompany you. In the end you learn to live with fear, with a certain caution. You always look back very naturally. You don’t think about it, but you take precautions.

Our goal is not to open a project. We are not here to open projects but to organize the response to realities of pain, impoverishment and vulnerability. In the end, we have to respond to people.

You got married in 2000, with the idea of being a missionary family. What were your first steps, where did you settle?

When we got married, we asked for some time apart. We spent three years living in another place. We offered the arras at the offertory. We said: “We offer them for the mission and may it be what God wills. The initial intention was to opt for the mission as a married couple, and up to now we are still like that. After that period until our eldest son turned three, we were offered to go to Bolivia and since then we are there, living in the community house.

What do you do there?

We deal with two main areas: violence against women and disability, and we coordinate the social area of the parish of Sacaba, near the city of Cochabamba. Our objective is not to open a project. We are not here to open projects but to organize the response to realities of pain, impoverishment and vulnerability. Sometimes it is necessary to organize work groups, sometimes not. Projects are not an end, but a means. In the end, we have to respond to people. For example, the issue of disability and violence against women has required a very organized response, obtaining many resources, training many people so that the response is consistent. It is a very numerous and very complex reality that has required a shelter, external care, job promotion for women, a therapeutic program for male aggressors, opening a space for the empowerment of women victims of violence.

The program of disability has been going on since 2007, but it had been going on for some time before, although it was not so organized. In our municipality there are 1500 people with disabilities, children and adults.

How have your children been assuming this missionary task?

We always tell them that the testament that we leave them is to have been able to meet people in very adverse situations with whom we have established a very fraternal relationship. We have also witnessed how people deal with these situations. My son is now in college studying computer engineering and our youngest daughter wants to study nursing. They are living their lives, but they do have a way of facing their own adversities with joy and a good face, giving importance to what is important. Montserrat Rescalvo, MISEVI missionary, present in the interview, adds: “Yes, it is true that the missionaries that go from here – Spain – and have lived with your children, we see the testimony of their social involvement and in the Church”.  My daughter is also very well integrated in the nature of Cochabamba, with character, and when she sees a young missionary who does not eat everything, she replies: “Here we eat everything” (laughs).

Do you have any final message that you would like to send to society?

Germán: The people who do not count for anyone, those who are left over, at least for me and surely for Delmy too, teach us how to live. Many people we had helped with food during the pandemic, when we were confined, came to bring us what they had. That almost brought tears to my eyes, I was moved. They are people with very poor conditions and they came with bananas, with potatoes, and they told us: “my money was not enough, I will see if tomorrow I can get you a chicken”. That is why those people who have nothing, and who seem to be left over, are the ones who teach you how to live.

Delmy: The people who have the least are the most committed in this time of pandemic. In my area of disability, which is where I have worked, they have responded in tasks, in identifying themselves in order to help the rest of the family members. This encourages me and gives me the courage to get up every morning and move forward. 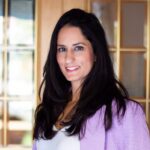 Wife, mother and journalist. I am happy to work in the press office of the Archbishopric of Zaragoza where I can use my skills in written and multimedia communication to serve the Church. I also work in COPE and Radio Maria, a field of journalistic communication.