Origin of Catholic Hospitals In The U.S.A. – The Sisters of Charity of St. Elizabeth Ann Seton

At five-thirty in the morning on October 15, 1828, four Sisters of Charity —Sisters Francis Xavier Love, Martina Butcher, Rebecca Dellone, and Francis Regis Barrett—left St. Joseph’s Provincial House in Emmitsburg, Maryland, bound for a new mission in St. Louis, where Bishop Joseph Rosati, CM, had asked the community to establish a hospital.  In 1828, St. Louis had around 6,000 residents but no hospital when four members of the Sisters of Charity moved there.

The Sisters reached St. Louis on November 5, 1828.  They stayed with St. Rose Philippine Duchesne and the Sisters of the Sacred Heart, at “City House” (Sacred Heart Academy) only 8 blocks from their present day, provincial headquarters.  The sisters moved to their hospital at the end of November, when their hospital was finally ready to accept its first patients.

The sisters hospital was located at 4th Street and Spruce Avenue, but 2 blocks south 0f the (old) Cathedral and (first) novitiate of the Congregation of the Mission.  Notably, it became the first hospital west of the Mississippi and the first Catholic hospital in the US. The Sisters helped St. Louisans survive many tragic events, including fire and two cholera epidemics, often risking their own lives in the process. 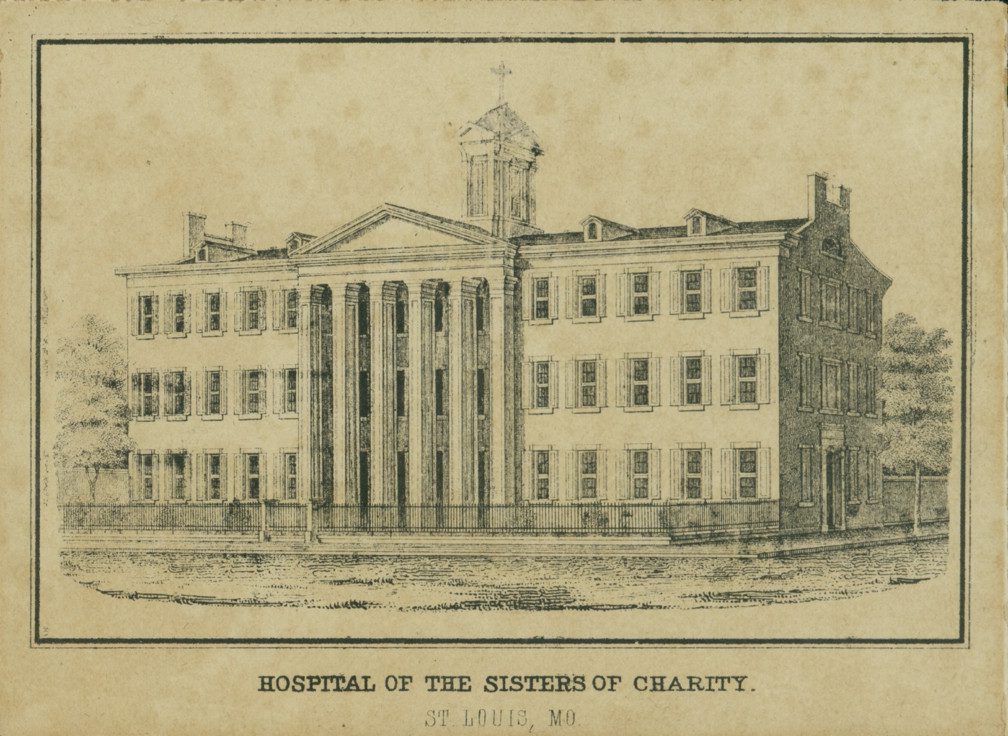 Hospital of the Sisters of Charity, 1854. Missouri Historical Society Collections.

During the cholera outbreak of 1849, the Sisters, who by this time were experienced health care providers, helped set up a hospital on Quarantine Island and did most of the on-the-ground work of caring for the sick.  In 1849, approximately one-tenth of the population of St. Louis (over 700) died from disease

Sr. Francis Xavier Love was a Sister of Charity (the order now known as the Daughters of Charity) who nursed in the St. Louis hospitals. The last week of October (1849) was the worst, she wrote to her order’s leaders in Emmitsburg, MD.: “We saw large, strong-bodied men suddenly struck and expire in a few hours, and before we could remove one corpse, a second, a third, and a fourth were ready.”  Their (Daughters) expertise and selflessness made St. Louis one of the few cities in the nation prepared to hospitalize cholera patients.