Through his writings, we invite you to discover Frederic Ozanam, co-founder of the Society of Saint Vincent de Paul and one of the most beloved members of the Vincentian Family (and about whom, perhaps, we may still know very little).

Frederic wrote much in his 40 plus years of life. These texts — which come to us from the not too distant past — are a reflection of the family, social and ecclesial reality lived by their author and which, in many aspects, bears similarities with what is currently lived, especially as regards the inequality and injustice suffered by millions of impoverished men and women in our world. 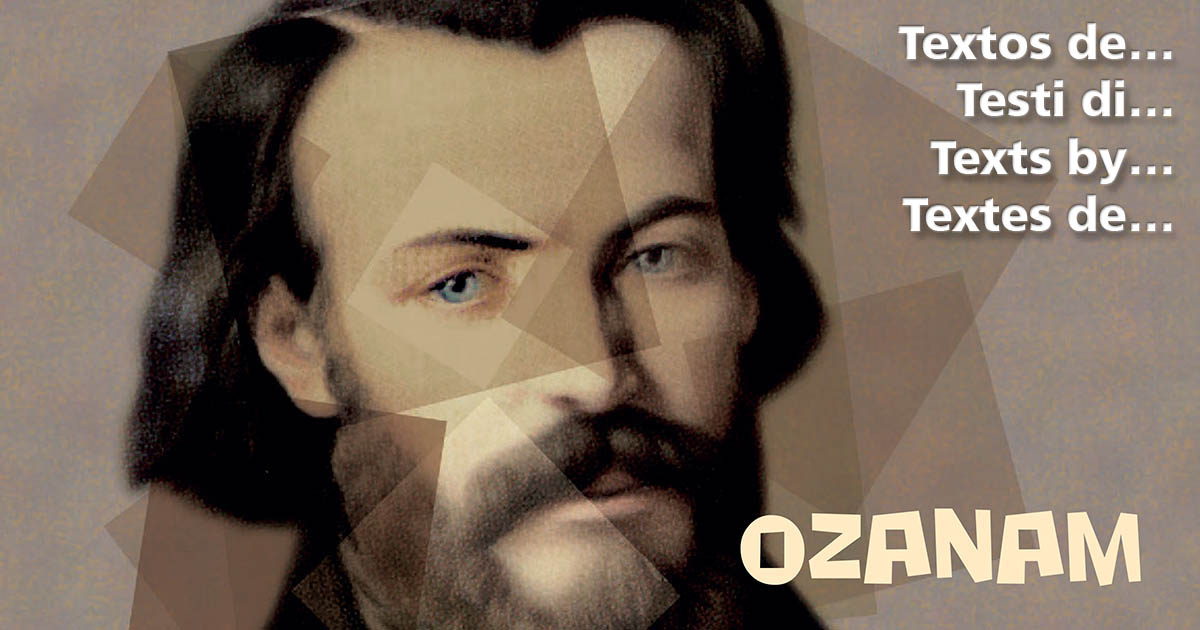 A favorite thesis by the socialists is to denounce almsgiving as one of the detestable abuses of Christian society, for, they say, alms insults the poor, because it humiliates them, because it does not allow them to break their black bread[1] without having to admit that they owe it to who name themselves their benefactors and, by becoming a debtor of them, cease to be their equal. From this, they conclude that alms, far from consecrating the fraternity, destroys it, because it creates, as it were, the patriciate of the one who gives it, the ilotism of the one who receives it.[2] What the socialists demand for the oppressed by the misery is a distribution of the goods that could satisfy them and that does not create dependence on them, is a legislation that leaves them without debts towards the society; it is not charity what they want, it is justice.

We can not fail to recognize the ability of a doctrine that will certainly be covered with applause whenever it is expressed in public discussions, since this doctrine is addressed to the most tenacious of human feelings, throbbing both under the rags and below gold and silk; we mean: pride. Yes, that is the eternal hope of human pride: to be detached from everything that obliges, because every obligation implies dependence; but that is an always frustrated hope. No, we do not know a single man, however well provided he is with the goods of this world, that he may go to sleep thinking he owes nothing to anyone. We know of no children who have ever paid what they owe their mothers, nor an honest father of a family who one day discovers that he owes nothing to the love of his wife and the youth of his children. Even if we had the honor of dying for our country, Providence has not allowed social relations to equilibrate as the asset and liability of well-run commerce, and that the affairs of mankind are as regulated as a book of accounts. The art of Providence, and its effort, so to speak, is, on the contrary, to relate the past to the future, one generation with others, the human being with the human being, by a series of good actions that create obligation, and services that can not be paid.

Over the next weeks we are going to reflect on a full article by Ozanam, too long to be published at one time, but which is among Frederic’s most outstanding (and, unfortunately, more unknown) pages. In 1848, in the newspaper l’Ere Nouvelle founded by Ozanam and a few colleagues, he wrote a good part of his social thought, ideas that were also part of his project as a candidate for deputy. Let’s recall that a large group of Catholics from Lyon, including many members of the Society of St. Vincent de Paul, asked Frederic to register his candidacy in Lyon for the elections to take place on April 23, 1848[3].

Frederic was hesitant to present himself as a candidate. He wrote to his friend, Theophile Foisset and stated: “I am not a man of action. I was not born for the podium or the public square”.[4] He also wrote his brother, Alphonse, and said:

“Among the concerns of this week, one of the most serious has been to decide on the proposal of a large number of people from Lyon who have offered me to join the National Assembly. My first movement has been to reject a mission so inconsistent with my customs and my studies. After all, after thinking on it before God and following the opinion of those who have rights over my conscience and my heart […] I have decided to make a sacrifice that I could not refuse without lacking honor, patriotism and Christian surrender.” [5]

Ozanam was not be elected, and was not in the May 4th session with the Catholics Montalembert, Lacordaire, Falloux, Berryer, Melun, plus three bishops and eleven priests who were elected.

Ozanam advocated a “Christian democracy,” long before this expression had any political significance in our world. A few months before writing the article that we are reflecting on today, he commented, in a letter to his friend Alexandre Dufieux:

“The republic may perish in a moment because of the faults of its defenders and the ability of its enemies. But democracy is master, and under all political forms will follow its progress and will eventually take the Republican form, which is the most natural and the most sincere. We are also not socialists[6] in the sense that we do not want the chaos of society, but we do want its free, progressive, Christian reform […]. The social question can not be avoided, and precisely because it is so important, God does not want us to leave it aside. A firm hand must be applied to the plague of pauperism. Other ways of equitably sharing the burdens and advantages of society have been proposed, as the progressive tax, and at first I do not reject it, since in my opinion the tax should be applied not to all income, but only to the superfluous, and it is less burdensome to bear a contribution of 20% on 50,000 francs of income than one of 5% on 2,000. But I want this progression to have its limits, for example, not reaching such proportions that a large owner affected by a 50% tax no longer has an interest in improving a good, half of which would belong to the State. It seems to me, for example, that three classes could be made, that of the small property, which would pay no more than 5%, that of the medium property, which would pay 10%, and that of the large property, which would pay 20%. This proposal has nothing subversive, especially if you take into account the danger that we are in.“[7]

One fundamental idea that appears in this text of Frederic is that we are not islands. We are relational beings who give and receive much, and therefore owe much of what we are to others, in a mutual dependence on services that cannot be paid. This starting point will be one of Frederic’s arguments to defend almsgiving, the aid to the poor, reaching where justice does not, as we will see in the coming weeks.

[1]   In former times, black bread was the food of poor and humble people.

[2]   «Patriciate and ilotism» are references to the ancient Greek language. The word “patricio” could be translated as “lord or master” and “ilota” as “slave or subject” but by doing so one would lose the implicit reference to ancient, a reference that Ozanam and the socialists wanted to highlight.

[6]   Around 1830, the socialist theories of Henri de Saint-Simon (France, 1760-1825) and Robert Owen (Wales, 1771-1858) became popular. In short, the utopian socialism — prior to Karl Marx’s (1818-1883) socialist manifesto (1848) — criticized capitalist society that condemned the workers of the new industrial revolution to the purely economic interests of factory owners, argued that private property was not a natural right but only a historical reality, and rejected liberalism. Furthermore, some utopian thinkers attacked family, property and religion as alienating factors of the human being. Let us note that Frederic does not attack the whole of utopian socialism, but some of its extremisms. We insist that contexts are important to properly interpret a text; otherwise, we could fall into conclusions that are quite contrary to the author’s intention.