“Kéré”: Famine in the South of Madagascar

Madagascar is one of the five poorest countries in the world. Everywhere on the island the majority of people live under difficult conditions. The extreme south is in a particularly critical situation, not only because of the coronavirus, which has caused many people to lose their jobs, but above all because of the drought which has been a major problem for years. The people in this region have always suffered from food shortages, which have been dramatically exacerbated in recent years by climate change. For the past two years, there has been no rainy season in this southern part of Madagascar, and food crops have become scarce, while cattle, goats and poultry are starving. People in the bushlands eat botagne (ash and tamarind) to satisfy their hunger.

Children in particular are in a state of malnutrition. A government nutrition programme was suspended in June. Now in October, the number of children aged 6 to 59 months suffering from acute malnutrition is estimated at 14,332. 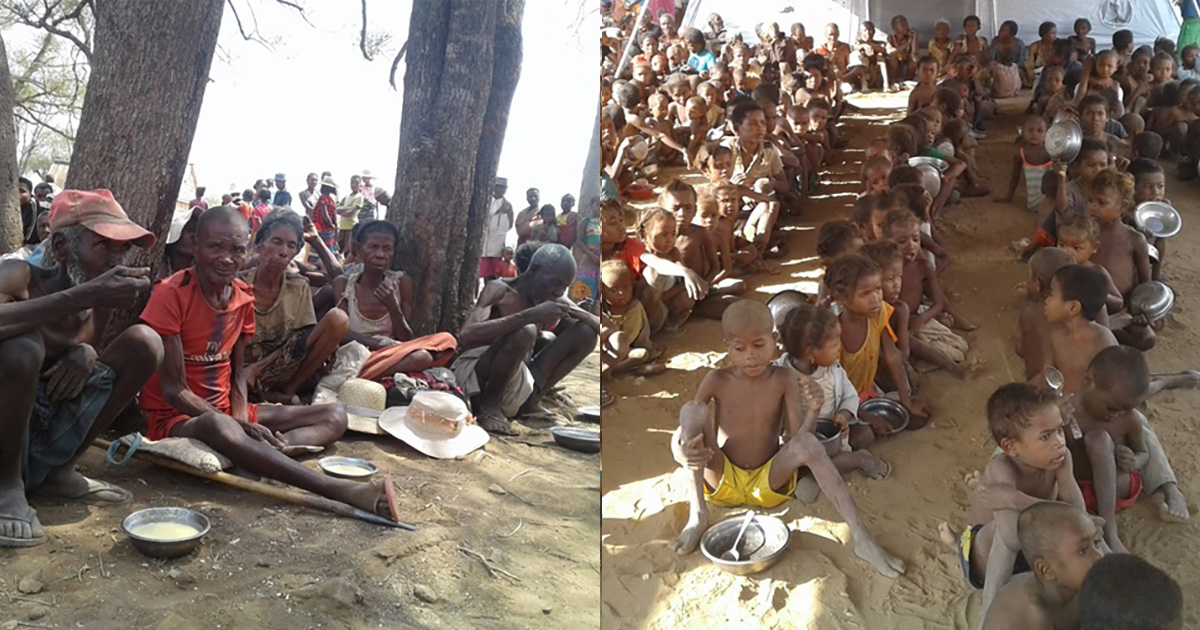 Faced with this famine, the Vincentian Family in the region could not remain indifferent. Father Alexander, Provincial of the Lazarists, decided not to leave the use of the donations received to the Lazarists alone, but to entrust it to a Vincentian Family commission (Lazarist Fathers, diocesan priests, Vincentian sisters, AIC, AMM, Vincentian Conferences, Christian volunteers, including protestants), because he knew that unity means strength. The role of this Commission is to plan a strategy to combat the famine more effectively. Depending on the donations received, destinations will be selected and consideration will be given to what aid can be provided and how the various donations (food, water, money, seeds, etc.) can be delivered to the people affected.

A small team of three priests and three Daughters of Charity has also been formed to organise aid at local level. Their task is, among other activities, to mobilize the members of the Vincentian Family to go door to door in the affected parishes to analyse the situation in each household.

“Thanks to the efforts of the local Vincentian Family, we have been able to obtain information on each site very quickly. We were informed of the number of victims and the number of families affected. And each location has already told us how the local team could start helping, for example how many kilos of rice per family or per person are needed. So, we decided to buy 53 tons of white rice in bags of 50 kilos. Instead of giving money to the individual families to buy water, it was suggested that we rent a water tank truck. So far everything is going well”, reports Father Pierrot Martin Rakotoarison, CM.

But he also writes: “According to what we have learned, this will not be enough, despite the amount of rice already distributed. We need more, because this famine could well last until January 2021”.

To support the work of the Vincentian Family in Madagascar to fight this famine, you can make a donation to the following account:

NB: The reports and photos of the famine in the south of Madagascar are from the regional coordinator of the ONN (National Nutrition Office) in Androy and from Father Pierrot Martin Rakotoarison, CM, from Fort Dauphin.

Tags: coronavirus
← Hurricane Eta in Honduras, Second Phase: Returning Home The Message of the Miraculous Medal: "Come to the altar"... Live the Eucharist! →