In 1790 during the French Revolution, a law was passed requiring all individual clergy to take an oath stating their allegiance to France– to make a public choice on whether or not they believed the nation of France had authority over all religious matters. Many clergy & religious believed that they could not put their loyalty towards France before their loyalty towards God. Facing execution, “Sisters Marie-Anne Vaillot (age 58) and Odile Baumgarten (43) showed their courage and dignity in refusing to betray the church and even refusing to allow a sympathetic guard, filled with good intentions, to make a false claim that they had taken the oath demanded by the government.” (from Fr. Joe Hubbert’s reflections on the Vincentian Family Martyrs of the French Revolution) 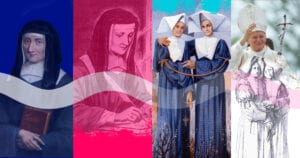 The following video is based on a homily by Fr. Richard McCullen, C.M. in which he takes us on a journey through time… from February 1, 1640, the day that Louise de Marillac signed a contract with the hospital in Angers, France saying that the Daughters of Charity would nurse the sick poor there, fast forward 17 years later when Louise would write letters to two sisters at Angers, fast forward to February 1, 1794, the execution of Sisters Marie-Anne and Odile, fast forward to February, 1984 when the sisters were beatified by Pope Saint John Paul II.

Tags: Daughters of Charity, Martyrs of Angers, Richard McCullen, video, Vincentian Martyrs
← Standing Up to Proclaim the Good News! Sisters Care for Home-based Patients and the Terminally Ill in Botswana →