Healing The Wounds That Bind Us, Our Daughters Of Charity Blueprint At St. Francis Xavier 1863

Excerpts and photos from article by JPK Huson 1863 from civilwartalk.com 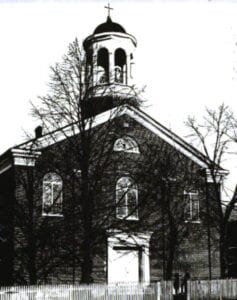 In 1863 St. Francis Xavier was the first to throw open it’s doors to welcome wounded men from both armies. Who answered the call from both armies? Sisters. Photo credit: civilwartalk.com

St. Francis Xavier Catholic Church in Gettysburg is too easy to walk by. We’re just so used to it hunkered down there on High Street, its facade no longer plain brick but witness to more History than we can fathom. In 1863 Irish immigrant Reverend Father McGinnis was nearing the end of his two year service to the parish. By October he’d be transferred, around the time the church reopened for services after the war rolled over it. Well, swamped it in blood. Every church in town had opened its doors to wounded, all were damaged. They received 500 dollars to split between all of them. That was 40 years later.

Those who served wounded there received nothing. Daughters of Charity would have refused payment for their work anyway and asked nothing when an army encamped on their doorstep in Emmitsburg, Maryland. Sisters fed 8,000 men, filled canteens, collected rosaries and religious medals for the Catholics among them and prayed with them. A place called Gettysburg was ten miles away. The soldiers were breaking camp for there the next morning.

“On July first the battle commenced about nine miles from Emmitsburg; it continued three days. Two hundred thousand men were in the field and on each side there were from one hundred to one hundred-thirty pieces of cannon. The roar of these agents of death and destruction was fearful in the extreme, and their smoke rising to heaven formed dense clouds as during a frightful tempest. The Army of the South was defeated and in their retreat left their dead and wounded on the battlefield. What number of victims perished during this bloody engagement? No one yet knows but it is estimated that the figures rise to 50,000!”
Father Burlando

“thousands of guns and swords lying around. … further on we saw many soldiers on horseback as silent almost as the dead who lay there … The rain had filled the roads with water, and here it was red with blood. Our carriage wheels rolling through blood! Our horses could hardly be made to proceed on account of the horrid objects lying about them.”
Sister Marie Louise Caufield, as wagons drove them closer and closer to Gettysburg

“To see the men lying dead on the road — some by the side of their horses. O, it was beyond description. Hundreds of both armies lying dead almost on the track so that the driver had to be careful not to pass over the bodies. O! this picture of human beings slaughtered down by their fellow men in a cruel civil war was perfectly awful.”
Sister Camilla O’Keefe A snip from the window, the most important one. Sisters aiding wounded men from both sides during one the most monumental splits this country endured. Photo credit: civilwartalk.com

There’s a reason this window was dedicated to the work there by our Sisters. They considered all men had souls hence were targets of compassion. Union and Confederate surgeons preserved a rigid, frigid cordiality as wounded from both armies were treated. The Sisters saw no uniforms, just the blood laying in pools under pews.

It was only ten miles, close enough for the battle to be heard. Father James Francis Burlando, Mother Ann Simeon Norris and 12 nuns packed themselves, food and medical supplies into wagons and left. Wagon wheels splashed through blood en route, dead and wounded lay where they’d fallen. The scene was so shattering Father Burlando dropped his charges at St. Francis Xavier, turned his wagon and went back to Emmitsburg. He returned again and yet again, Sisters and supplies.

There are copious descriptions of those nuns and their work at St. Francis Xavier those awful days. There’s the famous story of one of the Sisters finding her wounded brother there. Irish immigrants, both raised their hand when someone called.

“Of all the forms of charity and benevolence seen in the crowded wards of the hospitals, those of some Catholic Sisters were among the most efficient. More lovely than anything I had ever seen in art, so long devoted to illustrations of love, mercy and charity, are the pictures that remain of these modest Sisters going on their errands of mercy among the suffering and the dying.”
President Abraham Lincoln

Intent of the thread is those who answered the call for healing after one of the most shattering, mind numbingly violent encounters of the war. And why. Because humankind was their business, that’s why.

Tags: Daughters of Charity
← Sudden Death of Fr. Stanislaw, a Polish Vincentian in Puerto Rico At the Service of Homeless People →