In January 2020, Rome will host a meeting of the Superiors General and Presidents of the Vincentian Family. We began a series of posts about this and we will introduce some of the participants. We begin with this interview of Mother Marilena Bertini, Superior General of the Sisters Ministers of Charity of St. Vincent de Paul. 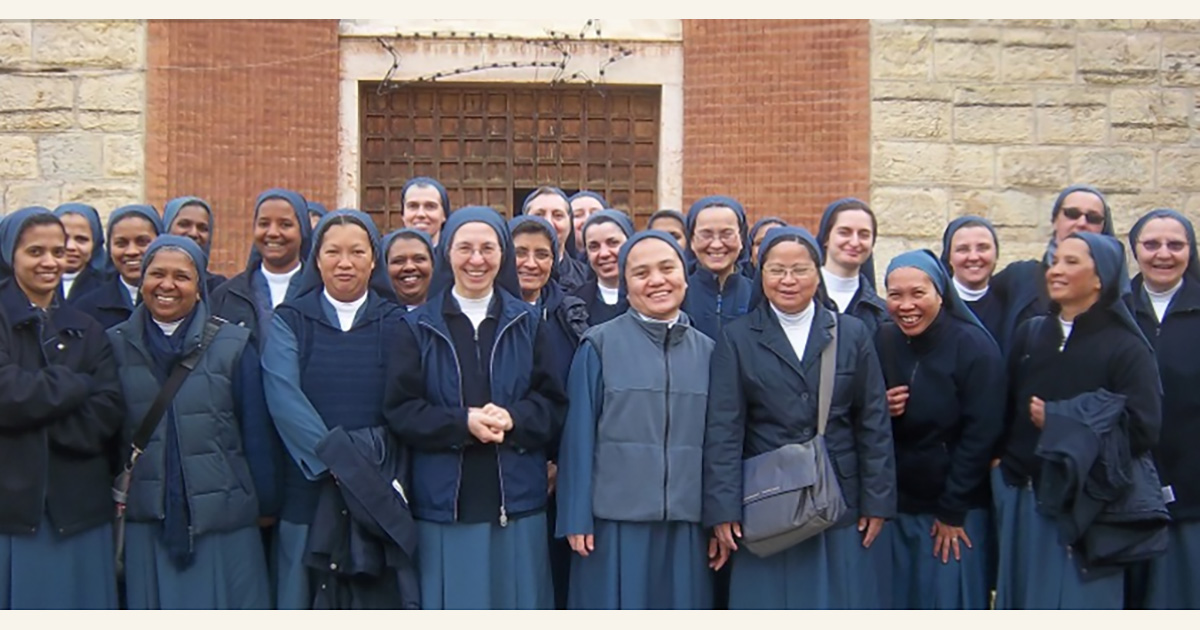 How and when did the foundation of your community take place?

The Congregation of the Sisters Ministers of Charity of St. Vincent de Paul was founded in Trecate (Italy) in 1733. At that time, the people of Trecate lived in a situation of extreme poverty, both material and spiritual. The noble, Giovanni Battista Leonardi, originally from Milan and owner of several properties in the territory of Trecatese, witnessed the poverty in this area and wanted to provide concrete help. He was concerned about offering young girls an opportunity for education (at that time, the education of girls was done in the home). Thus was born the idea of ​​”founding the Institute of Women Ministers of the Sick, similar to those erected in France by Blessed Vincent de Paul” (Decree of the Foundation). The purpose of these religious women was to provide for the infirm, giving them medicines and to educate women, whoup until that time were provided with purely domestic education. Leonardi died on January 29, 1733, before his desire was realized. He, however, had set aside monies for that purpose. It was Don Pietro De ’Luigi, pastor of Trecate, who brought to reality the vision of Leonardi. On June 11, 1733, Don Pietro obtained the approval of the Bishop of Novara, Cardinal Giberto Borromeo, for this new and original work. On June 25 of the same year the first Constitutions were approved, handwritten by Don Pietro de ‘Luigi. Later, the name of this group was changed to “Sisters Ministers of Charity of St. Vincent de Paul.” The real beginning of the Congregation took place on May 9, 1734, when the first young women met together in community. On November 11, in the parish church of Trecate, in the presence of civil and religious authorities, the first vesting in the habit of this community took place (the first members of the community to begin their year of novitiate). The following autumn (November 13, 1735) the founders made their religious profession, assuming the obligation to observe the vows of poverty, chastity and obedience that, at that time and until 1931, had to be renewed annually.

At time of our foundation, when religious were normally confined to a cloistered life, we were greatly influenced by the manner in which your Congregation came into existence. We wanted to be an apostolic groups but we also felt the need to maintain monastic elements. Therefore, the Mother House is still known today as the “Monastery.” For several years, there was also a fixed number of 24 nuns divided between choristers and converts, in the manner used in the cloister of that time. This led to initial limitations with regard to expansion, but we were able to maintain a balance between contemplation and apostolic action. It was precisely the social dimension of our sisters’ work that allowed them to avoid being repressed by Napoleon. However, history is not always repeated and a law, this time, an Italian law (known as the Siccardi Law, issued on July 7, 1866), managed to suppress our Congregation, allowing only the sisters who had made their profession before that date to continue their religious life. However, despite the difficulties and controls of authority, the sisters continued their consecrated life clandestinely, also accepting new members. To avoid further repression, they also opened communities in other cities in the province of Novara, such as Omegna and Prato Sesia, giving way to a new apostolic expansion of the Congregation that, for more than a century and a half, had exercised its work exclusively in Trecate. In 1899, the civil situation improved and the Sisters bought back their Mother House, which had been confiscated with many other assets, and resumed their religious life with greater apostolic zeal. In 1956, the Congregation obtained the pontifical approval of the Pius XII, (the decree is dated May 15, 1956). After the Second Vatican Council, the Congregation, responding to the invitation of the Church to open itself to the missions ad gentes, began to expand and established a mission in Peru (1971). In the years that followed new missions were established in the Philippines, India, Ecuador, Lithuania, Indonesia…

Since its foundation, the Congregation has referred to the spirituality of Saint Vincent de Paul and his French foundation. In particular, it was formed by learning from St. Vincent how to recognize Christ in the poor, to be attentive to the needs of those who are poor, not only their material needs, but also moral and spiritual needs. Over time, the religious family has remained faithful to the foundational charism, trying to understand the urgent needs of the moment and to respond to them in an effective manner: in the educational area, paying special attention to the needs of women; in the area of health care by providing for the elderly and sick in nursing homes, providing outpatient care, home visits, hospital service, prison visits; in the area of social services by providing dining rooms for the poor, distributing of food and clothing, and creating initiatives to promote the social integration of immigrants.

After having participated in the international symposium on the occasion of the 400th anniversary of the origin of the Vincentian charism, there is great joy in being able to come together once again as a Vincentian family. It is a new opportunity to get to know each other and to share experiences. With regard to the content of this meeting, it would be interesting to reread the Vincentian charism in the light of Pope Francis’ teachings.