The St. Vincent de Paul Society of Marin County has been a leader in transforming the county’s response to chronic homelessness with a person-centered approach that makes housing the top priority without such conditions as sobriety.

“Instead of asking people to change so that they can come into your program, the solution to homelessness is to put the individual into housing first and then help them with the issues they have if they want that help,” Suzanne Walker, the agency’s deputy director, told Catholic San Francisco May 10.

The county announced May 8 that chronic homelessness has dropped 28 percent since 2017. A news release credited an approach that begins with creating stable housing. The Marin Vincentians championed the approach, which was adopted by a network of county, city and nonprofit agencies.

The “Housing First” model prioritizes housing for the most vulnerable individuals and provides a case manager to help each person resolve medical, mental and substance abuse issues that could jeopardize a stable home. Walker said the approach has an 85 percent success rate in other parts of the country where it has been implemented. 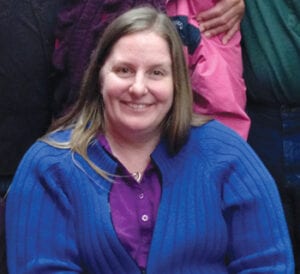 “At St. Vincent’s we were really frustrated because we kept seeing the same people year after year,” Walker said.

She saw too many homeless “fail out” of local programs, including a winter shelter effort where SVdP teamed with 42 Marin County churches, synagogues and civic organizations.

Walker said those who have been living outside for a long period of time often have overlapping disabilities that can make it difficult or impossible to find stability.

“It’s not their fault they can’t navigate the system,” said Walker, who was once homeless herself on the streets of San Rafael. “It’s our system’s fault that we were not able to help the people who needed the most.”

Housing alone often can have a stabilizing effect on medical and mental health and the difference is often quickly apparent in a formerly homeless person’s outward appearance.

“It can be amazing that after a month of being housed, someone can look like an entirely different person,” Walker said. “Their behavior changes because they are not struggling to survive every day.”

Homelessness services historically have been provided on a first-come, first-served basis by a number of public and private organizations. In contrast, the Marin Vincentians hired someone to research best practices.

The research led to a person-centered approach, reflected for example in the creation of a collaborative Homeless Outreach Team. Team members have the authority to adjust services on a case-by-case basis. A pilot program in Marin successfully housed 11 of 12 people served.

“How are we going to house Jim? What’s going on with him, what programs does he qualify for, what did he fail in, how come he is still on the street? Figuring out how to solve the problem specific to Jim,” Walker explained.

“Three years later that team is as if they worked for the same company,” she said. “All the agencies are working together in a way that wasn’t possible before.

“Our system is completely different than it was three years ago and much more effective,” Walker said.

The focus on housing has also led to 54 percent reduction in ambulance trips and emergency room visits.

“We had one client who was very medically fragile,” Walker said. “Strangers would call an ambulance all the time when they saw him. He was a super utilizer of emergency services. When housed he had a 100 percent reduction in those calls. We housed him with a caregiver who was able to take him if he needed to go or get him to see a doctor.”

“It’s the hardest work any of us have ever done,” Walker said, “but it is so worthwhile when you can get someone who has been out on the streets for 10 years or more into housing and then they stay there.”

In April, county supervisors voted to allocate $307,000 in state funds to the St. Vincent de Paul Society of Marin to create a program to steer newly homeless individuals to stable housing, the Marin Independent Journal reported.