Plunge Experience a Leap of Faith 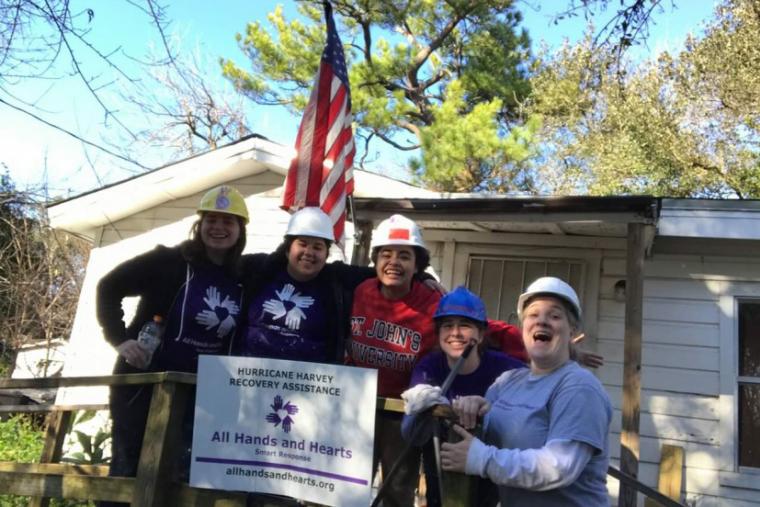 Rather than spend their winter break relaxing after a busy semester, a group of St. John’s students traveled to places like Houston, TX; St. Louis, MI; and Philadelphia, PA, for a week of outreach, advocacy, accompaniment, construction, and community building as part of the University’s Plunge Program.

St. John’s students participate in plunges as far away as Panama and France, and as nearby as New York City, all with the same goal: to heed St. Vincent de Paul’s call of helping those in need. Plunges often entail direct service at sites such as soup kitchens, shelters, schools, and community outreach centers, but the Houston Plunge is one of the more unique experiences.

In August 2017, Hurricane Harvey unleashed catastrophic flooding that devastated the Houston metropolitan area with damage estimates totaling more than $125 billion. More than 180,000 homes were damaged, over 9,000 were destroyed—and the cleanup continues.

St. John’s students spent a week working in concert with All Hands and Hearts–Smart Response, an international relief organization that has been working in the Houston area since January 2018 and has committed to continue their efforts there for at least three years.

“Our plungers helped with ‘mucking and gutting,’ which is the removal of mud, muck, silt, and other semi-soiled material from a home because of water inundation,” noted Jordan Bouchard ’14C, Residence Campus Minister for Vincentian Service.

Biology major Andres Munoz came to St. John’s intensely devoted to his studies and his goal of attending graduate school. Now in his senior year, service was initially not on his radar. “I never did service before. It was all about me, but recently I realized something was missing. That something was the Houston Plunge. It was time to move out of my comfort zone.”

St. John’s students lived in community with students from around the country in housing provided by All Hands and Hearts. Most were separated during their workdays, which gave them an opportunity to bond with other workers. “I wanted to challenge myself” observed sophomore Ziona Powell, a Health and Human Servicesmajor. “I like to say we met a lot of explorers.”

I was really motivated by the people doing this work,” Ziona stressed. “They came from all walks of life to observe and experience what was there, and help people in the process. I want to be like that, and now I want to explore the volunteer opportunities in my area.

Students found themselves doing work they had never done before, such as tiling, sanding, installing baseboard and drywall, and—after only a day’s training—completing these tasks on their own.

“I learned a lot about myself, and was very humbled by the experience,” Andres observed. “You don’t do it for any accolades. You do it because it’s the right thing to do—and I loved doing it.”

Environmental Science major Elizabeth Rodewald served as one of the leaders for the Houston Plunge and noted that planning for the experience began approximately 18 months ago. “You try to prepare as best you can, but you can never be 100 percent sure of what you’ll encounter.”

Elizabeth served on three plunges prior to leading the Houston Plunge and noted that the program is aptly named. “This is a fully immersive experience. You are taken out of your comfort zone. That is one of the pillars of the program. You’re taken out of your daily routine, given a full day of service in the Vincentian model, and then you reflect.”

Graduate student Samantha Melendez, also a plunge leader, added that, in some cases, participants may never come into contact with those they serve, or finish the projects they start. “However, you know that the small part you play is part of a greater whole. You know that one day this house is going to be finished.”

Freshman Katie Byrnes, a Homeland Security major, wanted to go to Texas because she vividly recalled the devastation Hurricane Sandy unleashed on her hometown of East Rockaway, NY. “Having been on the other side of that experience through my extended family, I wanted to find a way to give back.”

Each night, students shared with each other their reflections on the day’s experience. “That was one of my favorite parts of the day,” observed junior Dana Weinstein. The Pharmacy major noted that she took a step back and realized how she grew as a person. “I was able to give it a voice, and I heard from my peers what they got out of their day. It really validated the experience.”

Katie noted that she moved between several houses during the week. “I’m very much a perfectionist, and I like consistency. It was definitely jarring and a bit of an adjustment, but I learned so much. It taught me how to give up control and just go with the flow.”

Ziona had a message for anyone hesitant to take a plunge:

Don’t be intimidated and think that this is something beyond your capabilities. Take the leap.