Generate energy to give energy to area non-profit organizations, associations and other beneficiaries: this is the goal of the EnerCasa Coop Roadshow that arrives in Chieri, on Tuesday, January 29, at the Il Gialdo Shopping Center in via Polesine 2. Profits will be donated to the Vincentian Volunteer Group of Santa Maria della Scala, of the Cathedral of Chieri, in support of the social housing project “Zattera della Pace” [Raft of Peace]. 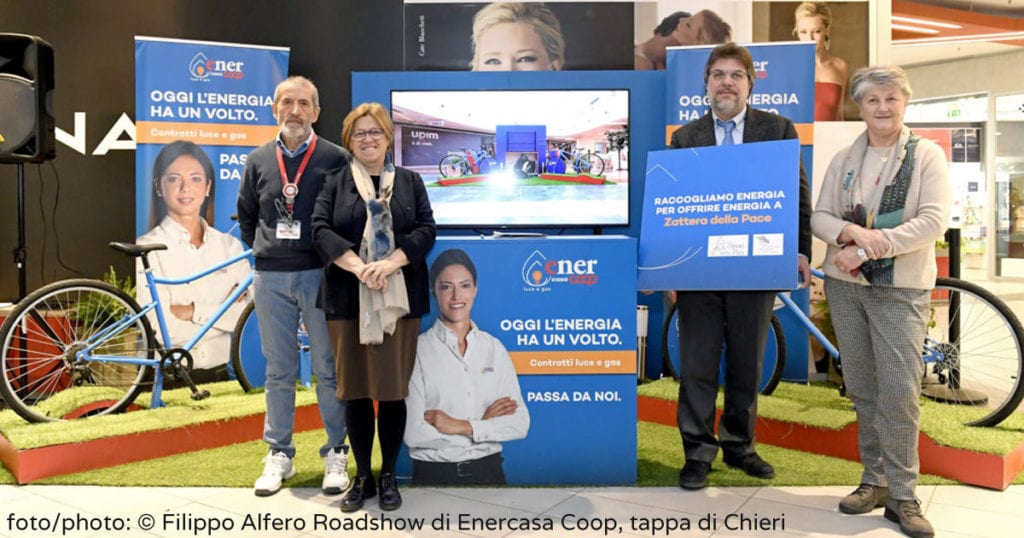 From Tuesday, January 29 to Sunday, February 3 (every day from 8:30 am to 8:30 pm), at a booth set up at the Il Gialdo shopping center, people can join the campaign by participating in a “relay of solidarity”… pedaling on two bicycle-generators that create energy by converting kinetic energy into electrical energy. The kilowatt-hours produced by all the “solidarity cyclists” will be multiplied by 2500 by EnerCasa Coop and donated to the Group of Vincentian Volunteers of Santa Maria della Scala in the Cathedral of Chieri. They will serve the energy needs of the urban housing structure “Zattera della Pace”, which the association has managed in Chieri since 2016, and which consists of four small apartments for families in emergency situations that meet the requirements for the allocation of residential public housing construction.

The four apartments are part of the convent complex of peace in Chieri. About three years ago the missionaries of the Congregation of the Mission in Italy wanted to remodel part of their house that was in disrepair, to create a structure that would welcome those who are homeless, take care of them, recognize them, empower them, and accompany them to improve their situation.

To achieve this, the missionaries of the Congregation of the Mission partnered with the Vincentian volunteer groups, local institutions and civil authorities.

The fundamental ideas that guided the design were:

Tags: Homelessness
← Who was your childhood hero? A Heart On Fire 400 Years Ago Shaped Our Church Today (Part 2) →