Sr. Carol Keehan to Retire as Head of Catholic Health Association Next June

Sr. Carol Keehan, a Daughter of Charity, has announced her retirement as president and CEO of the Catholic Health Association of the United States, effective June 30, 2019.

Named to the post in 2005, Keehan said in an Oct. 30 statement that it has been “an incredible privilege” to head the national leadership organization of the nation’s Catholic health ministry. 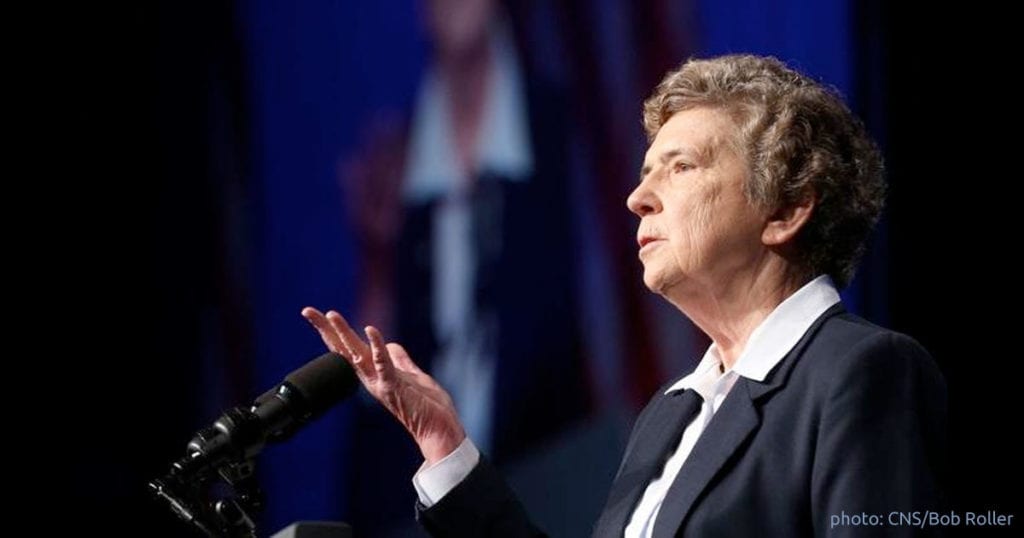 “The opportunity to get to know the entire Catholic health ministry across our nation and work with the wonderful staff at CHA and our committed board was an honor for me,” she said. “It is an inspiration to see the genuine commitment of the members of the Catholic health ministry in the United States to providing people with the health care they need, not just the health care they can afford.”

“The efforts to do this as a ministry of the church, both in our daily actions as well as in raising a voice for them in the public square, characterizes the members of CHA even in the most challenging times. Having been able to represent them in many forums is a privilege I will always treasure.”

The CHA board of trustees will conduct a national search for a new president and chief executive officer during the next several months with the goal of having a successor named by next June.

During her tenure at CHA, Keehan has been a leading voice in promoting access to health care for all, “especially for the vulnerable and those burdened by poverty.”

President Barack Obama thanked Keehan in 2010 for “the extraordinary leadership she’s provided in advancing our national discussion” on health care. He credited her with helping get the Affordable Care Act passed and signed into law March 23, 2010. The ACA’s major provisions came into force in 2014.

In the closing days of the health reform debate, Keehan and other CHA leaders urged passage of the legislation, saying they were convinced it would not expand federal funding of abortion.

In addition to a majority of Republicans in Congress, some Catholic organizations, including the U.S. Conference of Catholic Bishops, opposed key elements of the ACA.

The U.S. bishops, who for decades have advocated for accessible and affordable health care for all, opposed the final version of the legislation and challenged in court the law’s provisions for requiring that insurance plans include coverage for artificial birth control, sterilization and drugs that lead to abortions.

In a 2014 interview with Catholic News Service, Keehan acknowledged the ACA was far from perfect but she called it “an incredible step forward.”

“Sr. Carol has provided superb leadership to CHA,” said Michael A. Slubowski, president and CEO of Trinity Health and chairperson of the CHA board of trustees.

“Because of her relentless energy and passion for Catholic health care and the people we serve,” he said in a statement, “CHA and its members are key influencers for improving and standardizing community benefit reporting standards and increasing access to high quality health care for all Americans.”

Keehan has been the third woman religious to head the CHA in its 103-year history. Mercy Sr. Mary Maurita Senglelaub and Sister M. Helen Kelley, a Daughter of Charity, both served as CHA president in the 1970s.

Prior to joining CHA, Keehan served in various administrative and governance positions at hospitals sponsored by the Daughters of Charity, including 15 years as president and chief executive officer of Providence Hospital in Washington.

A registered nurse who also holds a master’s degree in business administration, she was Providence’s vice president for nursing, ambulatory care, and education and training in the 1980s.

Although the majority of CHA’s employees are in St. Louis, Keehan was based at the organization’s Washington officies. The board decided its president and CEO should be based in the nation’s capital because of the need to collaborate with the U.S. government, other national health-related organizations and the USCCB.