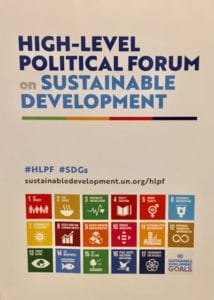 UN Headquarters in New York is bustling as nations gather for the annual High Level Political Forum. The forum is a gathering at which countries focus on progress toward the 17 Sustainable Development Goals (SDGs) which 93 countries approved in September, 2017. The theme is “Transformation towards sustainable and resilient societies.”

From now until July 18, when the Forum ends, 47 countries will report on their experiences related to the SDGs—what works, what doesn’t, progress, and challenges. 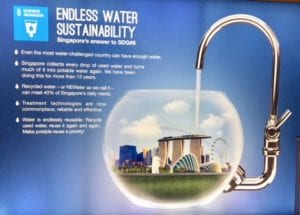 Running simultaneously with the HLPF are final negotiations towards a Global Compact on Migration, which is expected to be approved in Morocco in December. Tuesday was the final dialogue with civil society and others related to the Compact. The session recognized challenges in achieving wording to which all member states can collectively agree. At the same time could be heard concerns about language being “watered down” or needing strengthening, particularly with regard to recognizing climate change as a contributing factor to displacement of people; eliminating the detention of children and families; avoiding the criminalization of migrants; improving work-related issues; and creating more paths for regular (legal) migration.

“It (achieving the 2030 Agenda) will require policy makers’ unwavering attention, a laser-sharp focus on implementation of these goals, and a true sense of urgency.” — Liu Zhenmin, UN Under-Secretary-General of Economic and Social Affairs 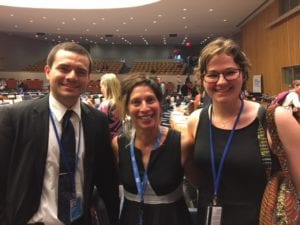 July 11, we passed out brochures at the United Nations related to homelessness. Pictured are Interns Emmanuel Hernandez, left, from Caritas Internationalis, and Kirin Taylor, right, from the Congregation of the Mission, with UN Special Rapporteur on Adequate Housing.

One of the areas being reviewed this year is SDG 11–“To make cities and human settlements inclusive, safe, resilient and sustainable.” This goal connects with the Vincentian Family and its NGO efforts to raise awareness of street homelessness. Thus, members of the recently-formed Working Group to End Homelessness (WGEH) will distribute new brochures about homelessness to member states during several events. The Working Group is promoting the adoption of “homelessness” as a theme during a Commission meeting in 2019.

FORUM WILL CONCLUDE WITH DECLARATION

The Forum is expected to result in a declaration reflecting a firm commitment to realizing the 2030 Agenda (…the Sustainable Development Goals and their targets), which has as an underpinning principle, to “leave no one behind.”

In his opening comments on Monday, Liu Zhenmin, UN Under-Secretary-General of Economic and Social Affairs, said, “It will require policy makers’ unwavering attention, a laser-sharp focus on implementation of these goals, and a true sense of urgency.” 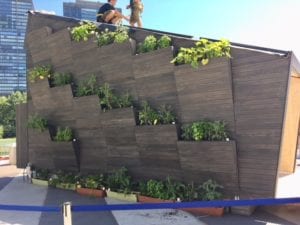 It is clear the world has a ways to go. Yes, progress has been made, even in some regions facing development challenges. The proportion of the world’s workers and their families now living below the extreme poverty line has declined significantly, from 27 percent in 2000 to 9 percent in 2017, the Under-Secretary-General pointed out. But issues such as drought, disasters, climate change, and conflict are impeding progress.

WORLD HAS RESOURCES TO END POVERTY

Columbia University Professor Jeffrey Sachs, one of Monday’s speakers, called upon large, developed countries to help those struggling in poverty, noting that there were sufficient resources for everyone in the world to live free of poverty. Sachs said Sweden was the country most on course to achieving the SDGs, and that Europe is “by far” the region doing best so far.

Each year, the Forum spotlights specific goals. This year, attention is being paid to the following SDGs:

Goal 6: To ensure availability and sustainable management of water and sanitation for all.

Goal 7: To provide access to affordable, reliable, sustainable and modern energy for all.

Goal 17. To strengthen the means of implementation and revitalize the Global Partnership for Sustainable Development, that will be considered each year.