Vinnies Catholic Organization in Australia Has Its Own Recording Studio

St. Vincent de Paul Society may be best known for its charity initiatives – and its sustainable fashion – but it’s also a thriving part of the Australian music industry.

Rarely covered by media and even more rarely publicized by Vinnies itself, its Ozanam Learning Centre (OLC) Music Studio opened in 2008 to concentrate on providing real options and pathways out of homelessness. 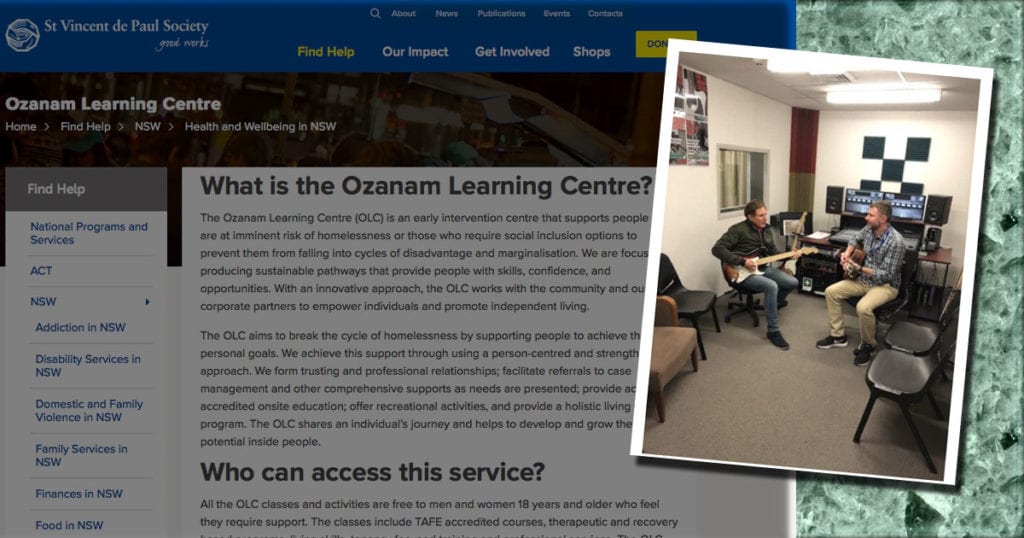 The daily focus centers around music (it even hosts a Drum Circle on Monday nights), but through self- expression, the studio equips participants with the tools and support necessary to create real change.

Located on Forbes Street in Darlinghurst Sydney, the OLC Music Studio has played host to a few big names in the ten years since its inception:

Seal visited the OLC in 2012 during his time as a judge for The Voice; Rick Grossman (Divinyls, Hoodoo Gurus) has helped run a songwriting workshop for the past two years; and singer, songwriter, guitarist and composer for shows like Mythbusters and Saturday Night Live, Mike Caen – whose collaborators include Paul McCartney, Elton John, and Rod Stewart – volunteers his time regularly.

Free to men and women 18 years and older, the OLC runs over 40 activities per week, including TAFE accredited courses, therapeutic and recovery based programs, and professional services, with approximately 120 people accessing the service daily.

Vlad Nestorovski, Music Coordinator at the OLC, entered the philanthropy sector ten years ago with a passion for music and helping people. As Vlad tells TIO, his decade-long experience in counselling, and producing, writing and recording music were a perfect mix when he discovered the music studio in the OLC.

“As opportunity would have it, my qualifications and passions lined up and an opportunity to coordinate the music program at the OLC presented itself and I haven’t looked back since,” he says. “It is certainly a unique opportunity that speaks to my greatest passions.”

“Music has long been recognized as a great way to give a voice to those who would otherwise remain unheard,” says Vlad. “[… The program] helps to create positive consumer engagement that increases participation of vulnerable people in community activities, helping to restore and build upon participants’ self-esteem and sense of self-efficacy.”

The OLC itself was founded as an early intervention center. It supports people who are at imminent risk of homelessness or those who need social inclusion programs.

“The OLC Music Program is designed to teach self-expression, foster self-determination and build upon self-esteem, while providing an emotional outlet for participants,” says Vlad. “Through music, participants are encouraged to discover creative and positive outlets that act as a catalyst for real and lasting change.”

Musician Terry discovered the Studio through Vinnies’ Ability Links program, its free service promoting inclusion in the community. Terry had been discharged from a mental health facility with issues around suicidal ideations when he told his social worker about his passion for songwriting.

His social worker helped him set up an online presence, complete with promo photos, a “Bandcamp” webpage, a band email and Facebook page, and single and album covers. He has since recorded several songs at the OLC Music Studio.