A Cheat-Sheet for Discerners of Religious Life She is now Sr. Amanda. She was once simply Amanda Kerns. She offered  “A Cheat-Sheet for Discerners of Religious Life” at about the halfway point of her transition to Sr. Amanda. We share it in the Vocation Awareness Week thinking that it might be of help to other discerners….

I don’t know about you but I loved that time in junior/senior year of high school when colleges began to “recruit”. Why? Because that meant lots of mail from different colleges, which meant, for me, lots of anticipation and excitement for the future. As I flipped through the pages of their brochures and magazines, I tried to imagine myself there. And there were so many choices, so many places to imagine. But the number of choices were also overwhelming at times. So overwhelming that, in fact, I applied to five different colleges – not making a final decision until shortly before graduation.
Discerning religious life can be a lot like that. Sometimes it seems that there are just as many religious communities as there are colleges. Each one has its special quality, each one has something that makes it different than the others, each one attracts someone in its own way. And just like a college, not every single religious community is for you. And unless you live in Catholictown, USA (hint: it doesn’t exist), there is no way for you to encounter every single community out there. And sometimes you have no idea what you’re even looking for. 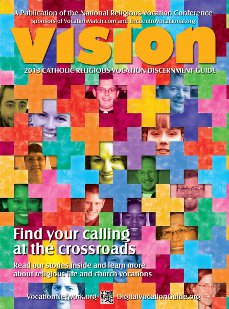 Because of that, when you’re discerning, the Internet can be your best friend.
And so can something called Vision Vocation Guide, who just came out with their new 2013 issue. (no, they didn’t pay me to say that) Because, unlike those mailings by individual colleges, Vision sends you a “catalog” of all religious communities in the United States – both mens and womens (there are also some great articles in there, like one called Why Catholics Care About People Living in Poverty from a fellow Sister blogger (Musings of a Discerning Woman). If you’re afraid to get it sent to your house (…and I totally get that), there’s also adigital version available. And be not afraid – you won’t be contacted by any religious community unless you contact them first.
Each listing of a religious community includes a small description of their mission, ministry, etc and contact information in case you do decide to take the leap (…and yes, I do know it is a leap!) Afraid to take the leap and contact the vocations director, yet there’s still something gnawing at you about that community? Investigate. Go to their website. See if they have a blog or two. (Shameless plug: some Daughter of Charity/Vincentian blogs are on the sidebar of this blog, as is the website) Check out their Facebook page or Twitter account.
So, don’t feel overwhelmed. Breathe.
Think about what it is that attracts you in a community – do I want to live in a monastery? do I want to teach? do I want to serve the poor? do I want a small community or a large one? do I want a habit? etc (and there are many more!) – and go from there. If religious life truly is your calling, you’ll find the religious community where God wills you to be. But it’s up to you to take the first step.
You may even realize that the answers to those initial attractions may change with time, as they did with me. After all, at first, I wanted a non-habited American community with a focus on foreign mission. And now here I am, in a habited French community with a mission on serving the poor wherever they may be found. The journey changed but it was taking those first steps that led me here.
Be curious. Investigate. Create that first footprint. Be not afraid!
(On another note, speaking of “catalogs”, the Response Directory, created by Catholic Volunteer Network, is a great way to find Catholic volunteer service opportunities. I used it to find VIDES+USA, which led me to Bolivia!)
Tags: Amanda, discernment, vocations